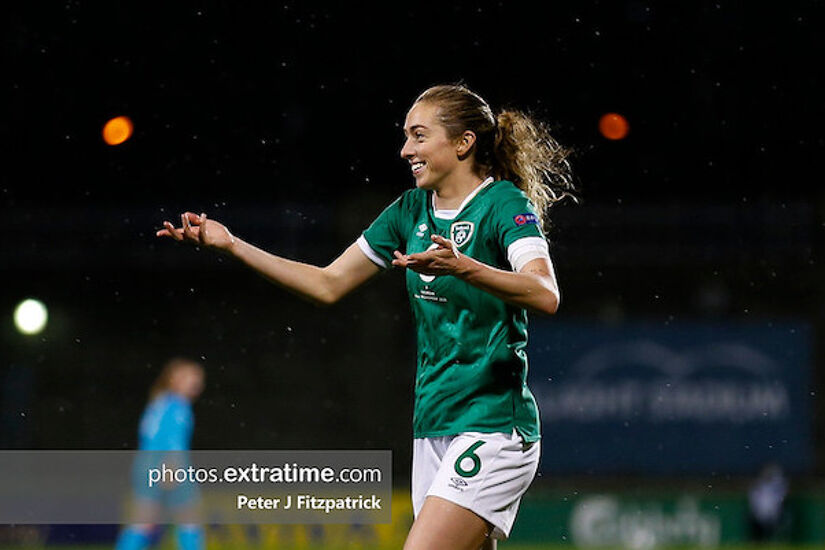 For Megan Connolly it was a fun game last time out against Georgia. The Republic of Ireland racked up a record Irish winning scoreline in Tallaght Stadium with Connolly grabbing the final goal of the game.

While that match in November ended in an 11-0 victory for her team, it will be a different challenge in Monday’s match according to the 25-year-old player.

“It was a fun game where it clicked for us,” said Connolly speaking to FAITV about that home game against Georgia ahead of this evening’s 2023 World Cup qualifier (kick off 5pm Irish time).

“We trained well that week going into it. A lot of things worked and paid off. Set pieces were a big thing in that game. The scoreline highlighted every one coming together. Even the players who came onto the pitch (as subs) contributed so much.

“There were lots of positives to take in but we will prepare (for today’s match) the exact same as every other game. A team is always going to learn from a result and Georgia will learn from it.”

Two wins from the next two matches would secure the play-off position from Group A for the 2023 World Cup but unsurprisingly Connolly isn’t looking past this evening’s game in Gori.

“For us at this stage of the campaign, every game is so important. There is no point in us looking too far ahead in the future when we haven't done this one yet.

In Ireland’s impressive 1-1 draw in Sweden in their last qualifier, due to a bit of a defensive injury crisis, Connolly was deployed in an unusual position for the Brighton & Hove Albion player – as part of a back three.

Ireland have no injury concerns this time around from the squad that travelled initially to Turkey for the two week training camp and on to Tbilisi on Saturday.

Connolly is happy with where the fitness is for this re-arranged fixture coming at the end of June. Her WSL season in England doesn’t start till 9 September – just after Ireland’s concluding group games in this World Cup qualifying campaign.

“For a lot of us we are out of season and trying to build up our fitness again,” said the Cork player who has 36 caps under her belt.

“The girls playing in season in Ireland, you can see they are bringing their week-in week-out (fitness) and for us it is just about getting back to it - getting the fitness, lifting the level and bringing it all together for Monday night (against Georgia).”