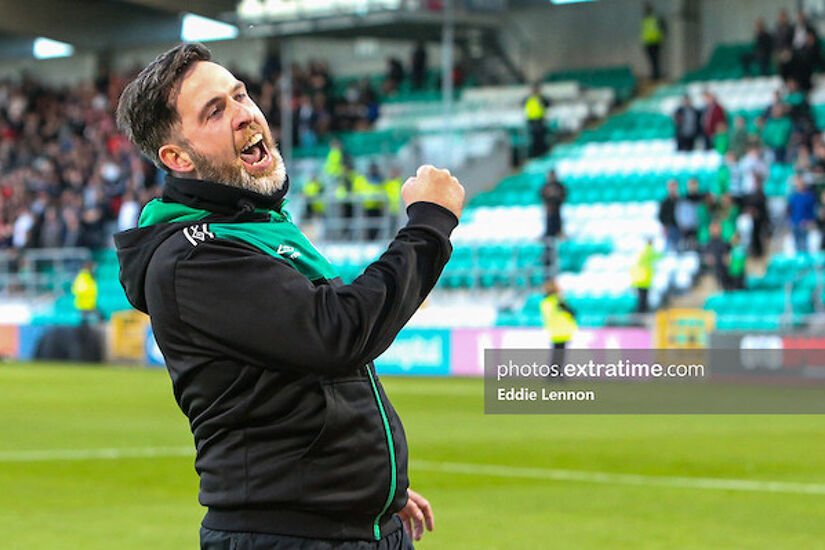 Shamrock Rovers Head Coach Stephen Bradley has expressed his gratitude towards the Hoops fans and the wider football community for the messages of support he has received after news of his eight-year-old son’s ill-health was made public.

Tallaght Stadium rose to its feet in the eighth minute of last night’s Dublin Derby as a sign of solidarity with the Bradley family, with a chorus of ‘only one Stephen Bradley’ ringing around the capacity crowd.

“It made me really emotional,” said Bradley after the 1-0 win over Bohs. “I can’t thank them enough, each and every person here that did that for me and for my family.

“My little boy is in the hospital watching that match. He will know that’s for him and that’s a special moment and something that will live with him and with me forever. Massive, massive thank you to everyone.

“He has a telly in his room, and he said if we didn’t win I couldn’t go back and sleep in the hospital, so I know where I’m sleeping tonight. I am delighted for him.”

The Hoops won the game thanks to a Rory Gaffney winner just as he had done in the earlier derby this season in Tallaght. The goal allowed Rovers claim their third successive win over their rivals in a game that was fiercely contested on the pitch with some boisterous challenges flying in.

“First half I thought we were sloppy, we were off it and allowed them to get a foothold in the game with the decisions we were making in and out of possession. They were slightly better first half I thought, even though we had the best chance of the first half with Aaron (Greene).

“We had a little chat at half time and tweaked one or two things and in the second half we were very good. We controlled the game, we scored obviously and could have added a couple more.”

However, rivalries were put aside at full time as Bohemians manager Keith Long and his staff gave Bradley a warm embrace after the whistle and he has been overwhelmed by the support towards him by the League of Ireland community.

“Keith texted me yesterday, and so did Trevor, and so did 99% of the league. Rivalries don’t matter when it’s something so personal like that. The support we have had as a family is fantastic, from everyone around the league and everyone connected to football around the country. I can’t thank them enough.

“There’s nothing better than telling the little fella that X Y and Z has sent you a message or a video, and see a little smile on his face. Massive, massive thank you.”

Bradley had returned to the dugout after missing the defeat to Dundalk to be with his son in hospital.

“We are a tight group, players and staff. There may be times if he is not well that I won’t be here, but I trust Glenn and Stephen with my life. I know they will be fine, and we may need that over the next few weeks or few months. “