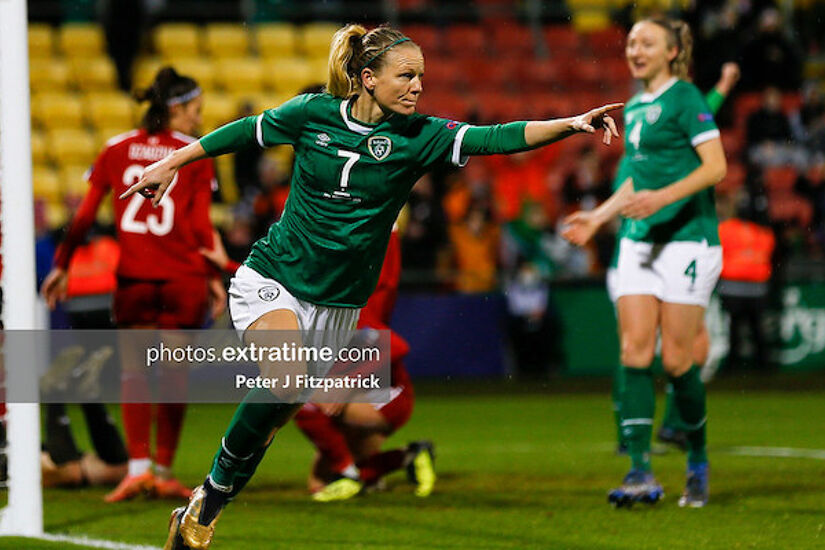 When the Republic of Ireland women’s team suffered seven defeats in a row at the beginning of Vera Pauw’s tenure as Ireland boss, some were questioning where the Girls in Green were going.

But Pauw’s plan to play top ranked sides in friendlies in preparation for the current World Cup qualifying campaign certainly looks to be paying off now as hert team eyes up a play-off position.

The experience of taking on teams in the top 20 world rankings including the likes of Germany, Denmark, Belgium and Iceland stood them in good stead and, starting with the win over Australia, Ireland have six wins and two draws from their last ten matches.

The recent draw with Sweden has given Ireland a great opportunity to finish second in the group and secure a play-off spot for the World Cup in Australia and New Zealand next year.

For Irish defender Diane Caldwell, she acknowledged the pain of those early losses but believed in the plan and the high calibre of players currently in the Ireland squad.

“The defeats hurt but you just have to trust the process and you know you are on the right path,” said Caldwell when speaking from Ireland’s training camp in Turkey ahead of Monday’s World Cup qualifier against Georgia.

“You are competing against the best teams. It isn't going to come overnight, it is a work in progress and you take it game by game. It isn't easy when you experience those loses but it is about driving on to our long term vision.

“It is testamant to the level that the players are playing at now. Everyone is pushing themselves indivdidually and collectively and that pays off. You've seen that in the performances.

“The growth of the women's game is also helping,” said the 33-year-old. “You see a lot of our girls playing professionally now in really competitive environments. That is going to have a knock on effect and improve the national team.

“You have goals and targets and everyone has the goal of getting to a major tournament but with the collection of players we have now it is the best we have ever had. Those targets become a bit more attainable.

“The possibility to still qualify is there and it is these next three games (against Georgia next week and Finland and Slovakia in September) that will determine if we get to that play-off spot.”

Great to get 90 minutes in the legs before the big test next week.
Even better, a win and a clean sheet.

Caldwell earned the first of her 85 caps as a 17-year-old back in 2006 but she wasn’t part of the last Ireland squad to make a play-off for a major tournament (the 4-1 aggregate loss to Iceland in 2008).

“I had been banished from the team after a falling out with (manager) Noel King so I wasn't part of that group. It took a new manager for me to get back in.

"Sue Ronan came in and had been my underage manager. She brought me in straight away and said I should never had been out of the squad.”

It is a dream for Ireland to make the World Cup but Caldwell last season played out another of her footballing dreams.

“It was everything I hoped it would be and more,” said Caldwell about moving to Manchester United. “As a life long fan that was my dream to play for United and wear that jersey.

"To be honest with you I never thought it would be possible especially as they didn't have a women's team until recently.

“I can't even put it into words how it felt. It was an amazing achievement for me personally and one that I really really took a lot of pride and honour in. Every minute I was there, I relished it. I accomplished my dream and nobody can ever take that away.”

With her contract up it remains to be determined where she will play her club football next season. “Nothing is decided on my future.”