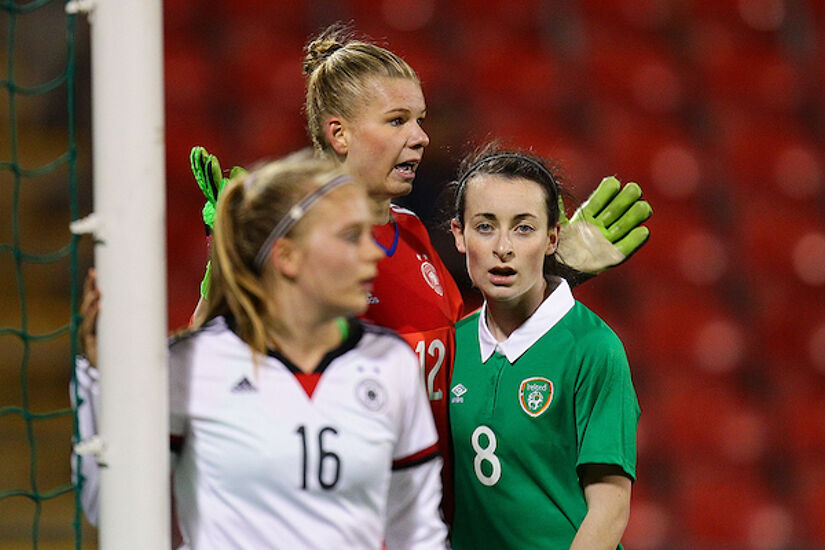 Roma McLaughlin admitted that it was a relief to be called up by Republic of Ireland manager Vera Pauw for the current World Cup qualifying campaign having had a few years away from the international game.

Now back in the international fold, and having played 90 minutes in Ireland’s friendly win over the Philippines last weekend, the Donegal woman is currently concentrating on next week’s World Cup qualifier away to Georgia.

However she knows there is a big decision awaiting her soon regarding whether to continue her studies and her club football in the USA.

“This time last year was my first call up under Vera against Iceland,” said McLaughlin who made here senior international as an 18-year-old back in 2016.

“It was a bit of a relief that I was still in the mix and that I could go in and prove myself again. When there were two or three years when I wasn't called up, in the back of your mind you are questioning will your chance will come again.

“To get that start (against the Philippines) and play the 90 minutes, I think it was really important,” said the player speaking from Ireland’s training camp in Turkey about her eighth international cap.

“I was happy with my performance. I tried to get on the ball and keep it simple and get my confidence level up. I haven't played in an international game for a long time so it was important for me to get rhythm playing with the girls again.”

The 24-year-old recently graduated from a four year degree in Exercise Science at the Central Connecticut State University where she has been playing football with university Blue Devils football team.

She has the option of doing a masters in Physical Education / Exercise Science which would also allow her to continue with the Blue Devils for another year.

Impressive performance by @RomaMcLaughlin in narrow win over Philippines

Her other choice is to return to play her football in Europe – she previously played in the WNL with Peamount United and Shelbourne. With NCAA rules meaning she can’t have an agent, she has been sounding out some of her teammates about her options.

Ireland’s current 27 player squad is made up of 14 playing in the UK, seven in the WNL, four in the USA and two in continental Europe.

“We are all constantly having chats about it. I think it is great for me that I can do that and find out about the different experiences from the girls. At the minute just to keep my fitness levels up, I'm training and playing in a summer team with the Connecticut Fusion.

“The intensity (against the Philippines) was much higher but leading up to this camp I played some intense games in the heat and that helped me. The intensity level with your senior international team is higher than the Blue Devils.

“If I was to stay (in Connecticut), we'd start in August and I'd get a lot of games under my belt. Or I could return to Europe. I need to make decision soon. Making a move closer to home might benefit me more in the long run. Once you are in camp, you try and forget about that and focus on what is important now.”

McLaughlin played in Ireland’s last November’s game against Georgia – the 11-0 victory in Tallaght – coming off the bench to provide an assist for one of Katie McCabe’s goals that night. However, she was watching on from the States when Ireland pulled off the incredible 1-1 draw in Gothenburg last April.

“I was in America watching the game. I think before there was this belief we could get something out of it and we showed that we could by getting a draw and we could have won the game. That is different from other years.

"Now when we were playing against the number two in the world, you strongly believe that you can get something out of the game.

“Our focus is the Georgia game and if we win that one we will shift focus to the next games (against Finland and Slovakia in September). There is a strong belief that we can get there (to the World Cup).”

The point earned against Sweden has moved Ireland up to their highest ever world ranking (27th).

“It is an amazing acheivement going up three places and it shows this team is moving forward. Sitting at home watching the Sweden game I was so proud. I almost felt I was there playing and making every move. I was so happy (with the result).”

Courtney Brosnan: ‘When everyone starts playing football they dream about being able to play in a World Cup’ https://t.co/0RfQFR4YHU pic.twitter.com/vYAFhU5Vrg