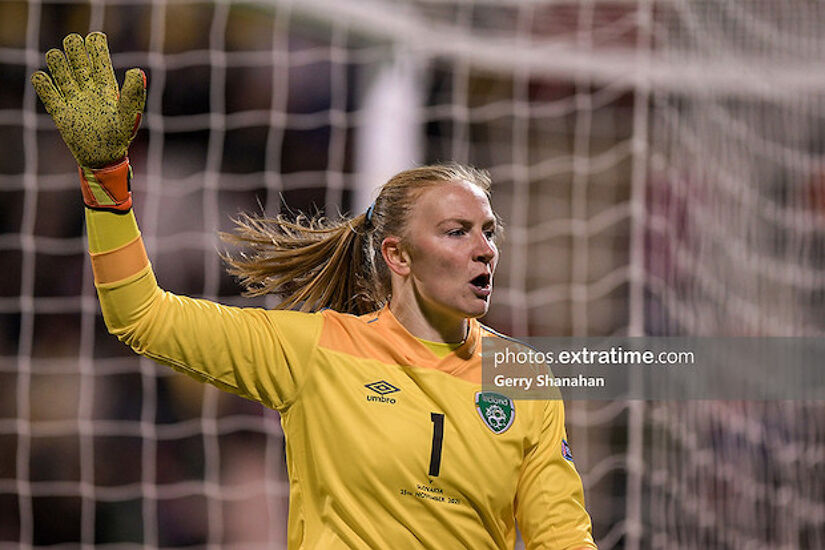 When the Republic of Ireland last lined out for a World Cup qualifier, it was mid-April in front of a 12,000+ crowd in the Gamla Ullevi Stadium in Gothenburg.

The expectant home crowd were there to see their Swedish side sweep aside the Girls in Green to book a place in next year’s tournament.

In didn’t quite work out that way with Ireland going ahead in the game only to be pulled back as they put in a battling performance to draw 1-1. It was the first time the Swedes had dropped points in a home qualifier in a dozen years.

Goalkeeper Courtney Brosnan was central to that draw with another excellent performance in a game where she faced 17 Swedish attempts on goal.

Vera Pauw made Brosnan her number one for this World Cup qualifying campaign ahead of WSL ‘keepers Grace Moloney (Reading) and Megan Walsh (Brighton & Hove Albion) and she has repaid the faith the Dutch coach put in her.

Brosnan was reflecting on the draw with Sweden and her own performances when she spoke from Ireland’s training camp in Turkey ahead of next week's World Cup qualifier in Georgia.

“I'm really proud of the team and of myself,” said the Everton ‘keeper. “It was a great atmosphere, playing in front of so many fans. You don't take that for granted and you realise how special it is to be able to put in a performance like that in front of a big crowd and get an important point.

“It is obviously great to go out against a team like Sweden and put in a solid performance, that helps to boost the confidence.”

That draw against the Olympic silver medalists is part of Ireland’s impressive run of recent results (six wins and two draws from their last ten games) that have propelled the team to 27th in the FIFA rankings – their highest ever position.

“We are trying to build something here,” said Brosnan when asked by extratime.com about the confidence in the group from those recent scorelines. “With the results we have gotten we are taking steps in the right direction.

“It is great to see that recognition in the world ranking and we are taking that as a confidence boost but not being complacent thinking the job is done. We still have a way to go and we need to stay focussed about the task on hand.”

Ireland’s next task is the upcoming qualifier in Georgia which will be a different match to last time out as the Georgians are so much weaker than Sweden.

If you talk about getting out of the frying pan (in Gothenburg), into the fire (in Gori in Georgia) it isn’t in relation to playing the same quality of opposition – Ireland beat Georgia 11-0 in Tallaght – but is more in reference to the 30 degree heat expected at game time in the Caucasus.

That is why Ireland are preparing for next week’s game with a lengthy training camp in Antalya in Turkey. Ireland beat the Philippines 1-0 on Sunday in a friendly played out in 27 degree temperatures.

“It has been amazing for us to be able to adjust to the heat and get a sense of what it is going to be like in Georgia,” said Brosnan. “It is really hot here but it has been good for us to get into our system.

"The mood is great in camp. Everyone is excited being back together and looking forward to the game.”

A win over Georgia would see the Girls in Green jump above Finland and into the play-off position with two games remaining.

While Ireland earned their biggest ever win in a senior fixture last time they played Georgia, they are expecting their opponents to be a different proposition in this upcoming game – previously they had players ruled out due to covid in the camp when they visited Tallaght.

“We are taking it one game at a time. Our full focus is on Georgia. We know how important it is to get the win and keep moving in the right direction.

"Everyone is aware that it is going to be a stronger squad. It will be a different challenge playing away from home. Georgia are dangerous on the counter attack and balls over the top.”

The 26-year-old goalkeeper’s contract with Everton is up. She made eight competitive appearances with the Toffees last season – with three of them coming after her return from her heroics in Gothenburg. She now needs to decide where she sees herself playing her football next season.

“For international games everyone is watching so it is a chance to show yourself but more important is being there for the team and getting the result. You can worry about all the other stuff later.

“I am trying to focus on the game here and do everything I can for Ireland. I'm working hard to be in the best position for myself at the club level. The environment at Everton is really supportive and wants everyone to do well when they go away on international duty.

“Everyone was really happy for me and there are a few Swedish girls on the team too so that was fun to talk about with then (she swapped shirts with her club team mate Nathalie Bjorn on the pitch after the game in Gothenburg).”

Should Ireland get second place in the group, it would open up a route to the convoluted play-off system for a prize of three places on offer for the nine runners up in the UEFA qualifiers (plus one inter-continental qualifier).

“When everyone starts playing football they dream about being able to play in a World Cup. Coming from a small country like Ireland that has so much passion, it would mean the world to me and all the girls. It goes without saying how big it would be for all of us.”

Vera Pauw: 'Lily Agg was fantastic on her debut, scoring the winner. She did really well.' https://t.co/LdYDI458wU pic.twitter.com/hQI4QBrY5X