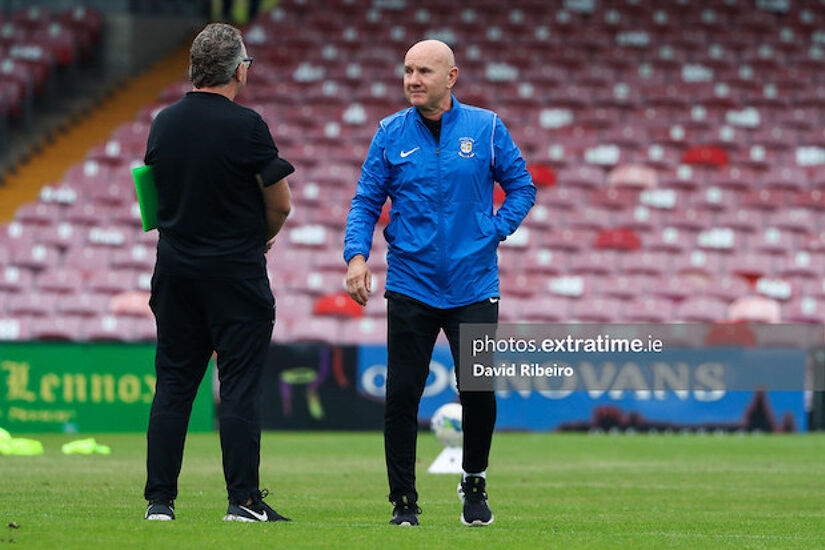 Paul Doolin enjoyed a glittering playing career before going on to manage in the League of Ireland and the national U-19 team with notable successes. Recently handed a two-year permanent deal with one of his former clubs, NIFL side Portadown, the Dubliner has lost none of his enthusiasm for the game.

Starting out at Bohemians and then Shamrock Rovers, the midfielder was also part of the all-conquering Derry City team during the late 1980s-1990.

“They brought unprecedented support to  grounds all over the country and it was good playing in front of 7,000 or 8,000 at the Brandywell too,” recalled Doolin when speaking with extratime.com recently. “There wouldn’t have been that many at any other grounds in the league at that time.”

Two stints at Portadown and Shelbourne, in addition to returns to Shamrock Rovers, Derry City and Bohemians, preceded a year with Dundalk and a player/coaching role at UCD, where Doolin still graced midfield up to the age of 40.

“If you want to play football, you need to be fit and in 21 years of playing, I don’t think that I missed a pre-season. I know that people say coaching is great – it’s very enjoyable, but you can’t beat scoring goals and making tackles.”

When he left UCD after two and a half years for fellow strugglers Drogheda United, competing for and winning trophies became the norm for a club on the up. He led the Boynesiders in winning both the first FAI Cup (2005) and league title (2007).

“Drogheda weren’t near the top of the table. I think they were second from bottom, one place above UCD. There were about 14 games left in the season and we managed to avoid the relegation play-offs. They weren’t a very successful team in the past, but then the group of people who took over the club wanted to try and do something.

"I remember saying to them that to get to their vision for the club was going to take time. We finished fourth the following year and reached the cup semi-finals, gradually building it up by then going full-time. For a club with little or no pedigree, to see the enjoyment that people got from the success was immense.”

“We challenged for the league, but everybody knows about the financial problems we had. We lost Denis Behan, Joe Gamble and Colin Healy to English clubs during the year and still ended up qualifying for Europe.

"It was a good way to end the season, but it would have been nice to see if we could do more the following year. It didn’t happen because it’s very difficult when players aren’t being paid and not happy about it.”

Getting away from the constant hands-on approach and financial woes of domestic club management, Dpp;om settled into a different role by becoming Ireland’s U-19 head coach in 2010.

“It gives you a different insight about football and coaching because you’ve only got players for a short time. I’d recommend it for any coach because it helped me along the way. There were lots of players never capped at any level and it was great seeing them coming through and going onto senior level.”

The undoubted pinnacle of Doolin’s six-year international tenure came when he guided the squad to the 2011 UEFA European Under-19 Championship semi-finals.

“I wasn’t familiar with qualifying for an international tournament. After reaching the elite phase after Bulgaria, we had a few friendlies, to look at different players, so there was a different squad going to the Euros from the one who started the campaign. Matt Doherty, John Egan and Jeff Hendrick were there, so we had good players, who performed well, but then were thoroughly beaten by Spain.”

After leaving the U-19s set-up in 2016, Paul didn’t register on the national conscience until resurfacing at Athlone Town last year.

“I didn’t take a back seat during those years and probably forced to do so. A lot of us were pushed to the side and I don’t think we were trendy enough (laughs). I did bits and pieces here and there until Bobby Browne contacted me. He was managing Swords Celtic and asked me to give him a hand.

"I appreciate that from Bobby because it got me back onto the pitch. I was there for around five months and they ended up getting promoted. I was delighted. Sometimes people forget when someone gives them a leg-up, but not me.

"After that I got a phone call from Michael O’Connor from Athlone. There were only eight games left, but I was back in the league. The hope was to reach the play-offs. We had three wins and two draws, but it’s a tight league.

"As enjoyable as it was, I live on the other side of the M50 and it’s difficult to get there, which was partly why I decided not to stay.”

Earlier this year Doolin was entrusted, in an interim capacity, to keep Portadown in the NIFL Premier Division and achieving this got rewarded with a full-time contract.

“I was in charge for the last 13 games and our objective was to stay in the league. It wasn’t easy because you’re going into a league you don’t know. You also don’t know what way you’re going to be received, but I think if players see you know what you’re doing, they’re open to you helping them.

"We ended up ahead of Warrenpoint, which kept us in the play-off position. Of course we went on to keep our Premier Division status. Next year it depends on the players we get in, if we can push up the table. It’s a tough league, with good players and four or five full-time clubs.

"Portadown have a good history, didn’t deserve to go down and we’ll look forward to the new season.”