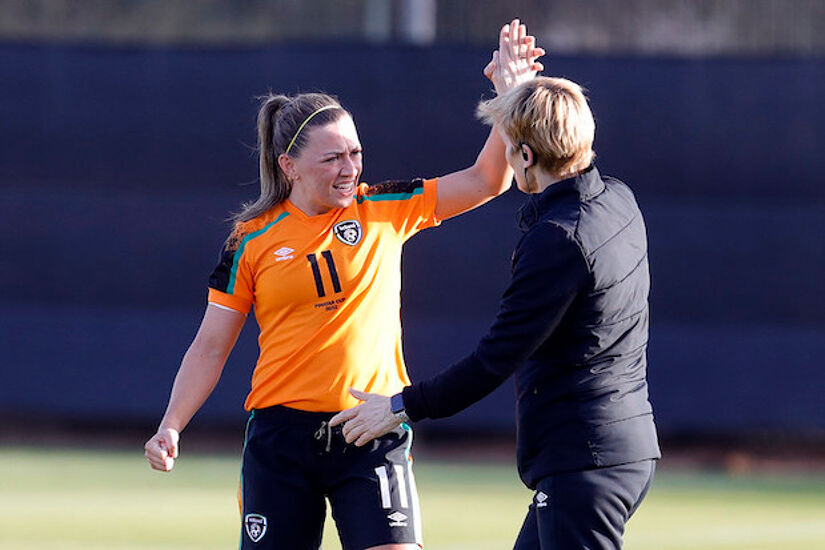 Katie McCabe skippered Ireland in the first half with Diane Caldwell having the armband in the section half Credit: Extratime Team (ETPhotos)

Lily Agg made a match winning debut for the Republic of Ireland senior women’s team on Sunday in the team’s friendly game against the Philippines in Antalya in Turkey.

The match is part of the team’s training camp ahead of their upcoming World Cup qualifier in Georgia on 27 June. The London City Lionesses' player was on hand to finish eight minutes from half time for the only goal of the game after Stephanie Roche’s shot was saved by Kiara Fontanilla.

The goal had come after good work from Heather Payne, who was a constant threat down the right during the game, and from Jessica Ziu who slipped the ball into Roche who was making her first start for Ireland in five years.

Ireland manager Vera Pauw described Agg’s performance as “fantastic” on debut. “She did really well. She is really a six but her best quality is that she can push forward and put the opponents under pressure. She sees the moment to get into the box.”

Ireland didn’t have it all their own way with striker Carleigh Frilles going close with chances in either half when both times she got onto the ball on the edge of the box with Courtney Brosnan to beat. However she couldn’t find the target on either occasion, enabling Brosnan keep her fourth clean sheet for Ireland.

However, away from those chances, the Girls in Green pretty much dominated the possession against a team who have already booked their place at next year’s Women’s World Cup in Australia and New Zealand.

Pauw made four changes at the break and gambled by using all her substitutes by the hour mark with the focus on getting minutes for her players – many of who finished up their club season over a month ago.

“We took a bit of risk as we had made all our subs after 60 minutes,” said Pauw. “We could have ended up with ten players but we took that risk as game time and rhythm were a key issue.

“We have built it up as a pre-season game. We wanted as many players given game minutes as we need to get into a rhythm for two weeks time for when we play Georgia.

With temperatures in Turkey tipping 27 degrees, there were water breaks in both halfs, allowing the team to re-hydrate and for Pauw to issue fresh instructions to her players.

“We did everything professionally with electrolytes and ice towels on the neck at the water breaks. We embraced it as we have to be ready for Georgia.”

As well as handing Agg her debut, Pauw brought Jessie Stapleton off the bench with the 17-year old Shelbourne player making her first senior international appearance.

The Ireland boss reported afterwards that there are no injuries amongst the players and that Denise O’Sullivan will join up with the squad on Monday after playing with North Carolina Courage over the weekend.

After the full-time whistle sounded, the players who didn’t play in the game along with some of the substitutes, played a 9v9 practice game against the Philippines to ensure everyone underwent a work-out.

The Ireland squad will continue their training camp in Antalya until next Saturday before travelling to Tbilisi ahead of the game against Georgia the following Monday.

Extratime.com Player of the Match: Lily Ag (Republic of Ireland)