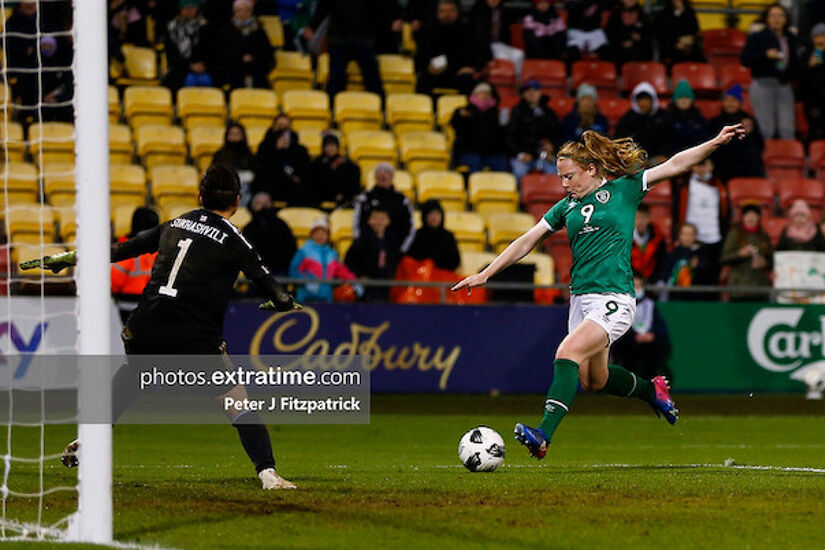 Republic of Ireland striker Amber Barrett admitted that going into the 2021/22 season that the target for her FC Köln’s women’s side was to avoid relegation.

The team from Cologne had bounced between the Bundesliga and 2. Bundesliga every year since 2015 but their eighth placed finish cemented their position in the top flight in Germany.

“Ultimately the aim was to stay up and avoid relegation but we outdid ourselves in many ways,” said 26-year-old Barrett when she spoke to the media from Ireland’s World Cup qualifier training camp in Turkey ahead of Sunday’s friendly with the Philippines (kick-off 4pm Irish time).

“We could have finished with a few more points but we achieved what we set out to do. It has been a project for the last two years and they brought players in to compete in the Bundesliga.

The Donegal women is the latest Irish player to play in the Bundesliga and was speaking in the week when Noel Campbell the very first player to do so sadly passed away (Campbell also played with a Cologne club - Fortuna Köln).

Barrett admitted that she found it somewhat difficult to settle in when she first joined the Cologne club in 2019 departing from Peamount United where she was top scorer in the WNL from 2016 to 2018.

Learning the language has been key for her. “When you get the language that is a big help. That was probably the biggest difficulty, as German is a difficult language and it is a sink or swim attitude over there a lot of the time. But as soon as you get a general gist of it, everything else takes it course.

"I'm not fluent but I can order a coffee and that is most important!”

Unsurprisingly Barrett believes that playing at the high level she is at is helping her football.

“I'm very lucky to have played against the likes of Bayern Munich, Wolfsberg and Frankfurt who now have also qualified for the Champions League. They are riddled with top German internationals and those from other countries.

“Getting to play against them, you do really learn all the time. Being exposed to that high pressure environment, training every day, playing against top opposition, it is only going to benefit you in the long run.

On Sunday, Ireland take on the Philippines in a certified FIFA friendly game Antalya in Turkey as preparation for the World Cup qualifier in Georgia on Monday week. Ireland moved up to 27th in the world rankings this week this month (helped by their 1-1 away draw with world number two Sweden) and that is their highest ever positions.

They will be taking on a Philippines team now in 53rd place. Midfielders Ciara Grant and Denise O'Sullivan won’t be involved in the friendly but will join the squad ahead of the Georgia game.

Barrett will be looking to add to her four international goal tally on Sunday if selected. She is enjoying the craic in the camp this week and being part of what she says is a “fantastic” group of women.

“We are very lucky that there are so many diverse personalities on this team. Fantastic women from all different parts of Ireland and different backgrounds. Yet we are all collectively going after one goal. Long term we will only continue to blossom and I hope to be part of that.

“I think collectively there is no better group of people in the world than Irish people. I 100% believe that. Being in Germany, sometimes you do miss out on that bit of Irish craic.

“Thankfully when I come into camp there is plenty of it, maybe too much at times but I think that is also an important side of it! There is never a dull moment. There are a lot of people here who I hope can stay in my life for a long long time.”

This international summer window comes a number of weeks after the end of the club season for most Irish players but the Girls in Green are very much focused on the football – and the aim of securing the play-off position for next year’s World Cup in Australia and New Zealand.

“The hotel is busy with tourists who are on their holidays but we know we are here to play football. We had our time off at the end of the eason and we are now solely focused on the game (against Georgia).”

A win over Georgia would see the Girls in Green jump above Finland into second spot with two games remaining.

“It is a challenge but we are all in the same boat,” said Barrett about this window being so long after the end of her club season.

“We have a lot of professional people here and how they dedicate themselves to getting right and when you have an international game in June you aren't sitting on your backside until the day before the game.

“You are looking after yourself and trying to get yourself up to speed and thankfully we have a long camp so there will be a lot of hard work before the Georgia game so by the end of that we mightn't be 100% but we will be as close as possible.”