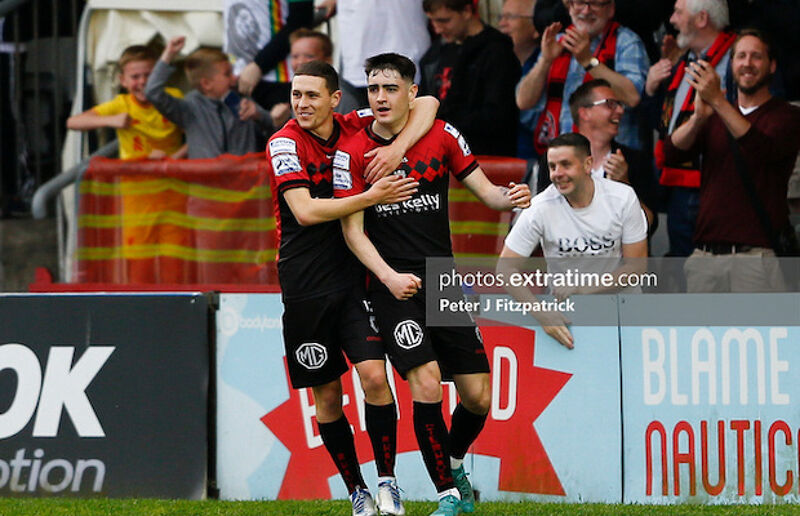 Dawson Devoy celebrating what turned out to be the winner for Bohs over Damien Duff's Shelbourne at Dalymount Park Credit: Peter Fitzpatrick (ETPhotos)

Bohemians jumped from seventh to fifth place in the league table by virtue of a deserved 1-0 win over Shelbourne at a packed Dalymount on Friday night.

This Dublin derby lacked the intensity one has come to expect from such a fixture and a solitary 12th minute Dawson Devoy goal was the difference between the two teams at the end of 96 minutes of play.

Both sides seemed a bit lethargic after their return from the mid-season break but Bohs were the sharper of the two and they took advantage of sloppy play by Shels to get the game’s only goal early on.

JJ Lunney deliberated too long on the ball when in possession outside his own penalty area. He was easily bustled off the ball by a hard- orking Promise Omochere and it broke to Dawson Devoy whose fizzing ground shot beat Brendan Clarke at his near post.

Neither Lunney nor Clarke will want to include this goal in their highlights reel and even though Shels had ample time to force an equaliser they were not up to this task on the night.

Bohs sat back after this early goal and allowed the Reds to force the pace but the visitors never really tested goalkepeer Tadhg Ryan at any stage.

The visitors were without the suspended Sean Boyd up front and his physical presence was certainly missed as the replacement centre forward Jack Moylan found it tough going against the Bohs central defensive pairing of Ciaran Kelly and Jordan Doherty.

Damian Duff’s side were gifted a present early in the second half when the Gypsies were reduced to 10 men.

Jordan Flores played a loose ball across the box to Kelly but it was intercepted by Shane Farrell and Kelly, as the last defender, took him down with a clumsy challenge and earned himself a straight red from referee Sean Grant.

Bohs boss Keith Long was forced to withdraw Liam Burt to allow him introduce replacement centre back James Finnerty but try as they might the visitors were unable to take advantage of the extra man for the remainder of the game.

They did exert a lot of pressure and introduced a raft a substitutes and while they had some half chances they found James Talbot’s replacement in goals, Tadhg Ryan, in great form.

The home team were camped in their own half for the last 25 minutes of the game but their defence was excellent and they never allowed a disappointing Shelbourne side get an equaliser.

The win will be a great confidence booster for Bohs who go into the lion’s den next Friday night with an away match against league leaders Shamrock Rovers while Shelbourne at least have home advantage when they entertain second placed Dundalk, who beat the Hoops at home on Friday, in their next outing.