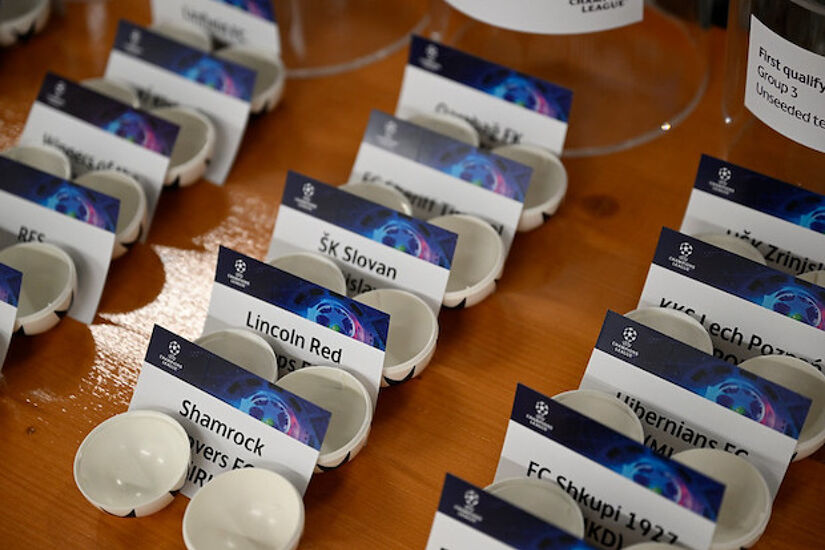 A view of the draw cards, balls and pots during the UEFA Champions League 2022/23 First Qualifying Round draw at the UEFA headquarters Credit: Extratime Team (ETPhotos)

Three of the four LOI clubs learn their European opposition

Shamrock Rovers, Derry City and Sligo Rovers all learned on Tuesday who they will face in the first qualifying round of European action.

St. Patrick’s Athletic, who as FAI Cup holders join the Europa Conference League in the second qualifying round, will find out their opponents in Wednesday’s series of second round draws in Nyon.

In the Champions League first qualifying round, Shamrock Rovers got a favourable draw from the group they were in as they will face Hibernians of Malta.

Should Stephen Bradley’s side progress, they will not be seeded in the second qualifying round. The draw for that round takes place on Wednesday when the Hoops will learn which of the teams below they will face if they make it to that far:

Beating Hibernians in the tie will guarantee the Hoops a place in the play-off round of one of the European competitions. Should they be beaten by the Maltese champions, they would drop into the second qualifying round of the Europa Conference League where they would be a seeded team in the champions path.

The Hoops will play the first leg against Hibernians on July 5th or 6th in Tallaght Stadium, with the second leg scheduled for Malta on July 12th or 13th (although the dates for all three League of Ireland sides matches are still subject to change).

Sligo Rovers
Sligo Rovers have a lot less travel for their game compared with the Hoops as the Bit O’ Red will go to Wales to take on Bala Town on July 7th before the second leg in the Showgrounds on July 14th.

Based on their grouping and the fact they are unseeded John Russell’s team will face one of the following in the second round should they progress:

The Candystripes were drawn against Riga FC who they will host at home on Jully 7th before travelling to Latvia on July 14th.

A win for Derry would see them seeded in the second round draw where they would face one of the following teams:

The Saints are unseeded in in the second qualifying round of the Europa Conference League and they will be drawn against one of the following teams :

Should any League of Ireland side progress to the group stages, they will not end up playing into December as Shamrock Rovers and Dundalk (twice) did in the Europa League.

With the World Cup taking place in Qatar away from the traditional northern hemisphere summer date, the group stages of the Champions League, Europa League and Europa Conference league are squeezed into six match nights between the first week of September and first week of November.

The World Cup kicks off on 21 November.

Stephen Kenny: 'Nathan (Collins) has been really really good. His decision making is excellent. He was exceptional over the four games.' https://t.co/jWYIeSsydj pic.twitter.com/s3o2GnoHfD