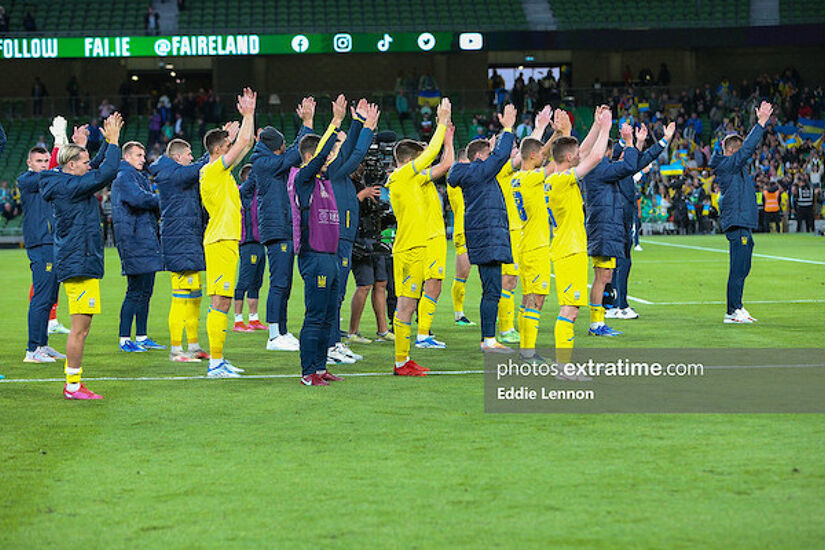 The Russian invasion of Ukraine means the ‘Blue and Yellow’ will play their home game against Ireland over 900km from Kiev in Lodz in Poland. Kick-off is 7.45pm Irish time on Tuesday.

Having beaten the Boys in Green in Dublin 1-0 last week, Ukraine followed that up with a 3-0 ‘home’ win over Armenia at the weekend in Lodz.

All but one of their last nine competitive goals have come in the second half of games and that includes all three goals from their 3-0 victory last time out.

Ukraine Head Coach Oleksandr Petrakov spoke about their motivation ahead of the game. “We do business for the country. We play football not for ourselves. We play to bring some positive emotions to our compatriots.”

Defender Vitaly Mykolenko echoed those sentiments. “I came here to play for my country, for my family, for the people who watch and support us in the stadium and in front of the TV,” said the Everton player.

“My parents are in Kiev now, thank God, everything is fine. I always keep in touch with them.

"My friends and godparents in different parts of the country. It is not always possible to keep in touch. They are more or less safe, I hope it will be so in the future.”

Stephen Kenny’s side will be looking to follow up last weekend’s confidence boosting first ever UEFA Nations League victory, 3-0 at home to Scotland, with another win that would move them level with Ukraine at the top of Group B1.

"It was a big win for us on Saturday and it is up to us to capitalise on it tomorrow against Ukraine,” said Kenny at the pre-match press conference.

“We know Ukraine are a really good side and we'll have to make changes but we should have confidence which is an important factor.

Ireland are without John Egan (family reasons) and Shane Duffy (suspended) in defence and goalscorer from last weekend Michael Obafemi. However Chiedozie Ogbene could return having missed the match against Scotland in Dublin.

Defender Jimmy Dunne has been called into the squad whilst Darragh Lenihan is in contention for his first-ever start for Ireland.

"We'll miss John and Shane of course but it is a good chance for the others to step up,” said Kenny who called Jimmy Dunne up to the squad over the weekend with Darragh Lenihan a possibility to be named for his first start for the Boys in Green.

"Michael has been ruled out unfortunately whereas Chiedozie is working hard to make himself available for the match so we'll have to see tomorrow and what changes need to be made."

James McClean spoke about the landmark century of caps that he is nearing.

"To get to 100 caps is definitely the aim. I'm still seven games away so anything can happen in football and you can't take anything for granted. The team are improving all of the time so I've got to keep up with that if I'm going to reach 100.

"We're looking to end the camp on a high and a win would put us back in contention at the top of the Nations League group so hopefully we can get the points.

"We know the qualities Ukraine possess but going into the game with confidence having scored three goals gives everyone a bit of a lift.

This is only the second time the teams have faced each other in a senior men’s internationals and comes just six days after Ukraine’s 1-0 win over Ireland in Dublin.

Having finally won their first UEFA Nations League game, Ireland are seeking their first victory away from home. They have drawn two of their six away games in this competition, with the last three played away from Dublin all ending in 1-0 losses.

Ukraine have played 11 UEFA Nations League games in total and have yet to draw a game. They have won seven of those matches and have scored in all bar one of those games – that was a 4-0 loss to Spain in September 2020.