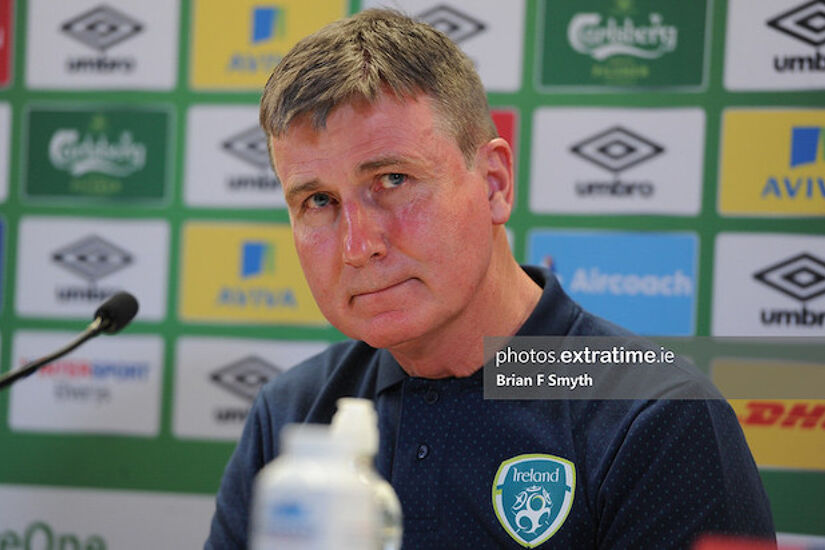 Stephen Kenny: 'The crowd got behind us and the players fed off the energy'

Stephen Kenny lauded his players after they notched what he felt was the Republic of Ireland’s most significant victory since they defeated Bosnia & Herzegovina in a EURO 2016 Playoff second-leg at the Aviva Stadium in November 2015.

Goals from Alan Browne, Troy Parrott and Michael Obafemi gave Ireland a deserved three points against a turgid Scotland side as the Boys in Green won their first ever UEFA Nations League game at the 13th attempt on Saturday.

“The players were terrific,” said Kenny after a game in which two players aged 21 or under scored in a competitive game for the first time in a quarter of a century.

“We went into this game after having real setbacks this week. We did concede a couple of chances and Scotland didn’t take them and we took ours and that was important.

“The crowd got behind us and the players fed off the energy of that and scored another two and could have had more.

“I asked the players before tonight, what was their most significant win they had at the Aviva Stadium in a qualifier in any competitive game.

“Probably, the one that was mentioned was against Bosnia in 2015. It is the biggest result.

Swansea City striker Michael Obafemi put in a man of the match display with a goal and an assist of equal quality. His sublime chip teed up Parrott to put the Boys in Green two to the good before he rifled a rocket into the top corner five minutes after the interval.

Unfortunately he is a major doubt for the return game against Ukraine in Poland after he was substituted due to injury moments later. John Egan is likely to be unavailable and Shane Duffy is suspended.

“His goal was a moment of immense quality,” explained Kenny. “It was great to see his shot hit the back of the net.

“I couldn’t envisage him scoring a goal like that. Having watched him play towards the end of the season, his performances for Swansea were the best of all our strikers.

“With Mike the four or five week gap between that and the first game and the fact he had not been in the squad before and playing two half hours with the group there was integration with the way we play. We will see how he is for Tuesday.”