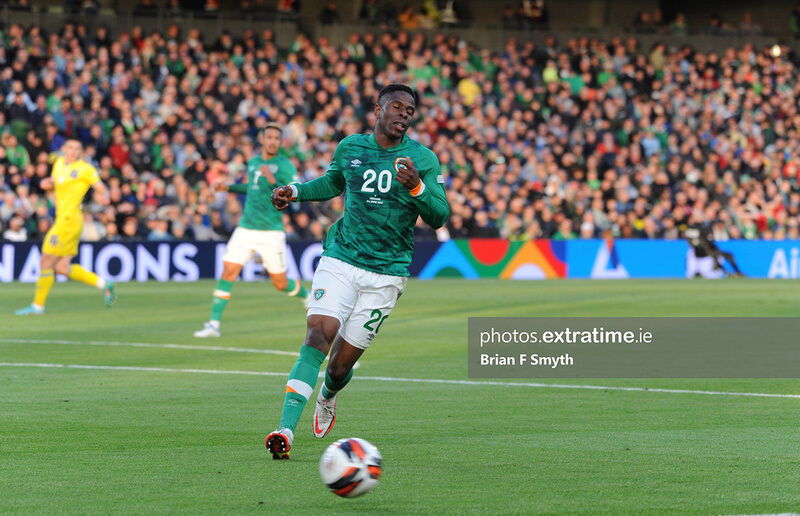 Ireland slumped to another 1-0 defeat at home on Wednesday night, as a Ukraine team that made ten changes from their recent World Cup Qualifying loss to Wales, controlled much of the game as they inflixted another Nations League defeat on Stephen Kenny’s side.

Viktor Tsygankov’s second half free kick was the difference between the two teams on an emotional nigt at the Aviva Stadium. It was a night that was supposed to be all about responding to Saturday’s 1-0 defeat to Armenia. There was no hangover, no lingering disappointment, or sluggish start.

Jason Knight nearly opened the score in the second minute after he danced into the Ukrainian area and shot at the bottom right corner of the goal. Ukrainian captain Andriy Lunin read his movement perfectly though and caught the Dubliner’s shot with ease.

The next time the Derby County midfielder got into that position, he forced an excellent save from the Ukrainian goalkeeper. Ireland’s defence was air tight in the first half and the back three of John Egan, Shane Duffy, and Nathan Collins repeatedly thwarted an inform Artem Dovbyk. The striker, who has three goals in seven internationals, arrived in Dublin looking to build on his impressive season with SC Dnipro-1 in the Ukrainian Premier League.

Instead of getting a goal, he set up  Mykola Shaparenko to score from distance. However, a review was called for and VAR found that Dovbyk’s foot was offside in the build-up. The goal was ruled out and Ireland breathed a massive sigh of relief.

The second half opened with an in-swinging free-kick from Tsygankov that beat everyone inside the area before floating into Caoimhin Kelleher's top right hand corner.

As the team readjusted, Egan was forced off through injury. His replacement, Dara O’Shea, slotted straight in with no disruption to the team’s game plan. Ireland nearly equalised through Jeff Hendrick as ran onto the edge of the box and had a shot blocked by Valeriy Bondar.

Despite Duffy hitting the crossbar after meeting a cross from Festy Ebosele and a flurry of late attacks, Ireland could not find the opening to secure any points on a mild night in Dublin.

Extratime.com Player of the Match: Jason Knight (Republic of Ireland)

Shane Duffy: 'The Ukraine players should be really proud of how they handled themselves' https://t.co/oWjuWzb2WI pic.twitter.com/er877oqnly