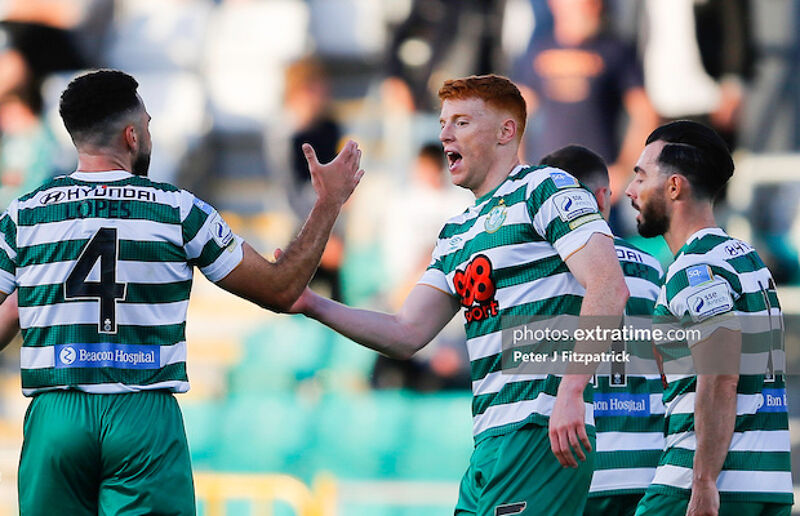 Shamrock Rovers bounced back after Monday's defeat to Drogheda United with a 2-0 victory over Shelbourne in Tallaght Stadium to move eight points clear at the top of the table.

Richie Towell and Rory Gaffney's goals in the first half were the difference in the Ringsend derby, on a night when Derry City dropped two points at home after a 2-2 draw with Finn Harps.

The Hoops started like a house on fire and were ahead after just 66 seconds. Towell finished off a move that came shortly after Shels wasted an attacking free-kick. Graham Burke fed Rory Gaffney who crossed into the box. Dylan Watts stepped over the ball before Towell slotted it calmly into the bottom corner.

Rovers dominated possession throughout with Burke a constant dangerman. The Ireland international showed some nice trickery in the 10th minute before attempting an ambitious lob from just inside the Shels half, but it fell short and was saved by Brendan Clarke.

Burke then turned provider for Gaffney on the 28th minute but his shot was gathered by the experienced Clarke.

But the striker would have his goal minutes later. Just on the half-hour mark he linked with Andy Lyons down Rovers left before turning at the corner of the box and rifling the ball past Clarke.

Rovers started the second half just as they started the first and should have had a third goal within the first minute. Lyons crossed for Gaffney but Clarke blocked his close-range effort before Watts was denied by a last-ditch Aaron O’Driscoll block.

On 66 minutes Rovers skipper Ronan Finn got forward and crossed for his opposite wing-back Lyons but the ex-Bohemians man headed way over.

Minutes later Finn had two chances in quick succession. He angled a run in behind the visitor's defence but Clarke was quick off his line to stop him. He gathered the rebound and smashed an effort goalbound but Clarke again got to it.

While Shelbourne passed well at times they lacked any cutting edge in the final third. Rovers generally held them to half-chances and crosses. A Boyd miss-hit shot from a free-kick was the closest the Reds came in the second half.

Rovers emptied the bench on 78 minutes with four subs coming on. Two then combined for the home side's next chance.

It should have been 3-0 on 84 minutes when substitute Neil Farrugia showed great pace before crossing for fellow sub Aaron Greene, but the striker missed the ball completely.

Rovers have now only lost once in 15 league games while Shels run of four wins in a row comes to an end as we go into the mid-season break.