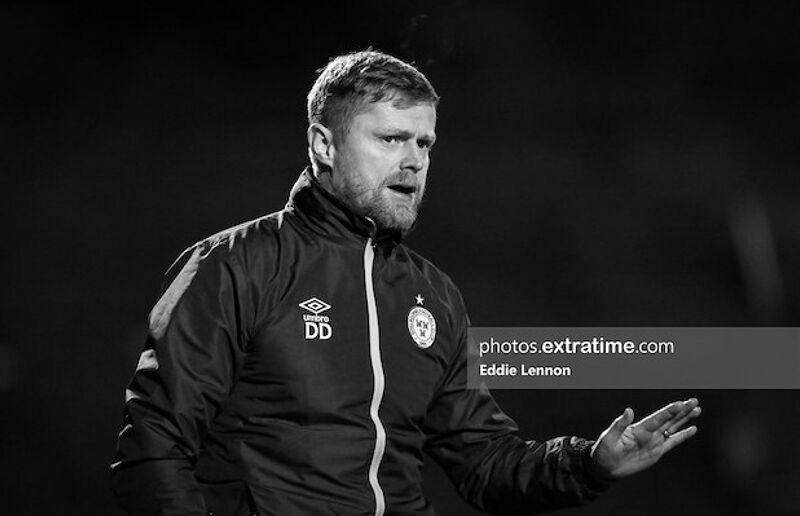 Damien Duff's Shelbourne got their third win in a row this evening Credit: Eddie Lennon (ETPhotos)

Damien Duff may decide to stay away from the dugout as his side won all three matches, including this game against St. Patrick’s Athletic, during his three game touchline suspension.

Shelbourne earned all three points in Inchicore thanks to goals in either half from Jack Moylan and JJ Lunney either side of the Joe Redmond goal scored for the Saints in first half injury time.

It was certainly a fiercely but evenly contested Dublin derby in Richmond Park on Friday night in what was the first derby over the next four days in the Inchicore venue. With supporters tucked into all four sides of the ground and some tasty tackles flying in, there was plenty for supporters to shout about. And that included a couple of first half goals.

While Duff watched on from the directors box, it was Joey O’Brien who was shouting instructions from the dugout, although Duff's voice certainly carried out across the pitch particularly in the second half.

He will have been happy with his teams start as on a couple of occasions early on Sean Boyd caused the Athletic’s defence some concern. At the other end the Reds defenders were throwing themselves in the way of Saints shots – Ben McCormack and Billy King both had goal bound efforts blocked in quick succession in the 13th minute.

Saints skipper Chris Forrester really should have put his team a goal up on 20 minutes but, with the goal at his mercy, off a Eoin Doyle square pass, he blazed the ball over the bar and out of Richmond Park.

Four minutes later his team were a goal down. A ball over the top to Boyd was intercepted by Redmond who flicked it back over his head. However it fell nicely to Moylan who took it by Tom Grivosti to fire a shot home.

Doyle went close just after the half hour mark as he got on the end of a fine first touch passing move from the Saints but he couldn’t quite curl his effort into the bottom corner of the goal.

It looked like Shels would take the lead into the break but Pat’s put on some late pressure. Conor Kane hacked clear in injury time to stop Darragh Burns but from the resulting corner Pat’s recycled the ball with Joe Redmond tucking the chance home off Billy King’s low cross.

The Saints made two switches at the break with Grivosti and Sam Curtis, who was on a yellow and put in a very robust tackle late in the first half, withdrawn for Jack Scott and Ian Bemingham.

It was the Reds who scored next restoring their lead nine minutes into the second period. Shane Griffin had done well down the left and when his cross came out to JJ Lunney he stepped inside and his deflected effort nestling into the far corner of the Saints goal.

Tim Clancy made another couple of changes on the hour mark with Tunde Owolabi coming on to lead the line for the Saints. He linked up with Ben McCormack who came on at the same time a couple of minutes later but McCormack lifted his shot into the trees at the Kilmainham end of the ground.

Owolabi then forced a fine save from Brendan Clarke who pushed the ball out to Eoin Doyle. He couldn’t get the ball out from under his own feet on the edge of the six yard box and the Reds were able to clear.

With Duff and his team's supporters screaming their team on, the Reds were able to slow the play down and claim their third win in a row. The Saints will have to pick themselves up quickly with the visit of Bohemians to come on Monday while Shels welcome bottom side UCD to Tolka Park.