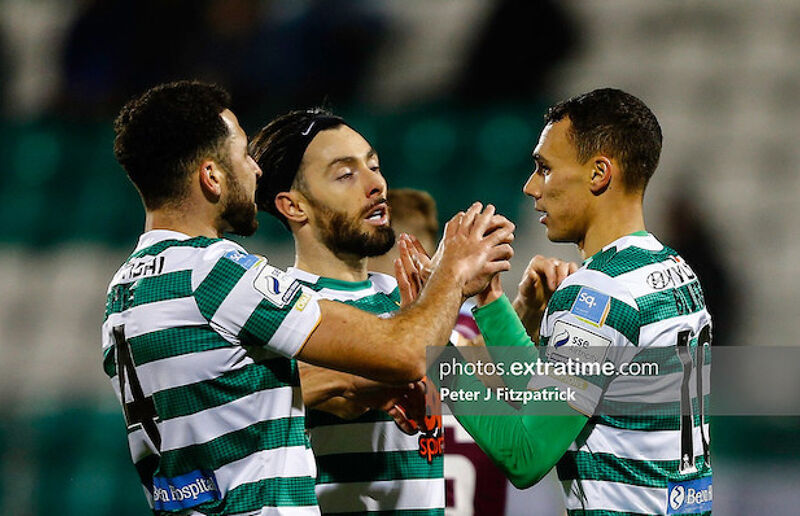 The Hoops went top of the table for the first time in two months after a 3-1 home win against Sligo Rovers on Monday night thanks to half-time substitute Graham Burke who scored a 15 minute hat-trick.

A late goal from Aidan Keena meant little to the Bit O’ Red who made it back-to-back defeats in Dublin across the last four days although there may have been grandstand finish had Sligo Rovers scored on 90 minutes rather that hit the post.

The Hoops were very much second best in the opening period and so Stephen Bradley rang the changes at half time – making four switches – and those substitutions made all the difference in the second period.

This Monday night fixture was one brought forward from July when both Shamrock Rovers and Sligo Rovers are playing in Europe. The performance on the pitch in the first half was very far from what would be required if either team are to progress in European competition.

It was the visitors who had the best of the limited good play in the first half that was played out in very blustery conditions.

Both sides made multiple changes from their games four days prior to this. Sligo Rovers, playing with the wind at their backs in the first half, had five changes on their team sheet and then they lost goalkeeper Ed McGinty in the warmup with Richard Brush coming in for Liam Buckley’s sixth switch.

The home side meanwhile only retained four players in their starting XI from their 3-1 home win over Finn Harps last Friday.

Overhit passes and foul throws – two from Barry Cotter – brought groans from the home supporters in the 3,000+ crowd. The Hoops had a high line that the Bit O’ Red tried to break down but more often than not Michelle O’Neill who was running the line had her flag in the air for offside.

Adam McDonnell brought the most attacking threat in the opening period and Sean Kavanagh had to be lively to clear with his head with McDonnell lucking behind him.

The Rovers defender – playing in the Hoops back three - had done well earlier in the game to take the ball off Max Mata’s toe inside the six yard box after Robbie McCourt skipped by Sean Hoare to send in a low cross.

At the other end Nando Pijnaker kept Aidomo Emakhu in check and the Rovers teenager was amongst four changes that Stephen Bradley made at the break as Burke, Rory Gaffney, Andy Lyons and Chris McCann all came on as heavy rain began to fall in Tallaght.

The switches proved crucial to the outcome of the game. Nine minutes after the restart the Hoops worked the ball through Lyons and Jack Byrne with Burke running onto Byrne’s pass to beat Brush with a well struck effort.

Two minutes later the Ireland international had his second of the game as the Bit O’ Red got caught upfield. Gaffney raced onto a ball over top from Byrne to hold off Pijnaker and play Burke in on goal who had an ocean of space to finish.

He grabbed his third on 69 minutes as he picked up Lyons’ square pass and his left foot effort from outside the area found the back of the net for his hat-trick. Aidan Keena scored a consolation goal for Sligo Rovers eight minutes from time but the visitors were out of the game by then having been blitzed by Burke.

The Hoops had drawn both games against the Bit O’ Red this season but this first victory over Sligo coupled with Derry City playing out a scoreless home day with St. Patrick’s Athletic meant the Hoops jumped above the Candystripes to go top of the table.

City travel to Tallaght this coming Friday for what is a mouth watering fixture.