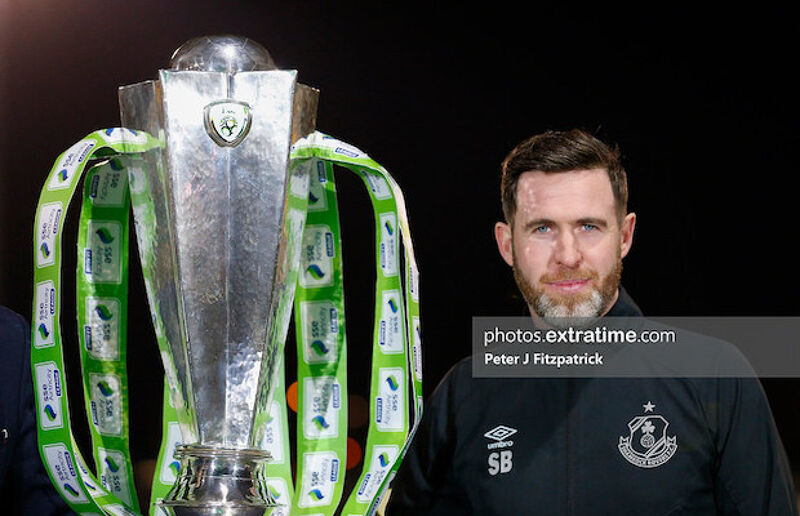 Stephen Bradley who will now remain at the club will be looking to become only the third manager to win there League of Ireland titles with Shamrock Rovers Credit: Peter Fitzpatrick (ETPhotos)

Shamrock Rovers confirmed on Friday morning that their Head Coach Stephen Bradley will remain at the club.

Bradley had been in discussions about a possible move to League One side Lincoln City but will now stay in the Tallaght Stadium dugout.

"During the past few days there has been much speculation about my immediate future as Shamrock Rovers Head Coach,” said Bradley in a club statement. “I would like to thank Lincoln City for expressing an interest in speaking to me about their vacant managerial position.

“Like every manager and coach I one day have an ambition to test myself in different countries and at different levels of the game.

“But right now, I am very happy to stay and continue my work at Shamrock Rovers. I love this club and I feel that our work here is not yet complete.”

In the last two seasons Bradley brought back-to-back titles to Tallaght – their first league success since Michael O’Neill’s tenure at the club finished in 2011 – and he ended the 32-year FAI Cup famine at Rovers securing the club’s 25th FAI Cup crown in 2019.

“The exceptional squad of players that we’ve built and our incredible fans makes me feel so hungry that we have a real opportunity to achieve more success at home and in Europe to match the ambitious targets the we have set ourselves as a club over the next few years.

“I would like to thank the Chairman and the Board for their counsel and support over the past few days. We have a huge few months coming up starting with tonight at home against Finn Harps and me, my staff and the players are ready to go!"

Bradley’s time at Rovers has seen records fall. Across the end of 2019, through the whole of the truncated COVID-19 2020 campaign and the beginning of 2021, Rovers set a League of Ireland record going 33 games unbeaten - eclipsing the record of 30 matches held jointly by a Shamrock Rovers side from 1927 and Athlone Town in 1981.

The Hoops went through the 18-game 2020 season, winning 15 matches and only dropping points in three drawn games - and conceding the fewest ever goals in a League of Ireland season (seven).

In 2021 they won the league by 16 points, the second largest ever margin, with a new club record for number of wins in a league campaign (24) and points earned in a season (78).

As well as looking to defend their title and claim a 20th league crown, the big challenge for Bradley now is to emulate Michael O’Neill’s Rovers team from 2011 and qualify for the group stages of a UEFA competition. The squad assembled is one that is aiming to compete both domestically and in European competition.

Unlike last season, the Hoops are seeded in the Champions League qualifiers which should allow them a more favourable route to the group stages - more realistically through the Europa League or Europa Conference League.