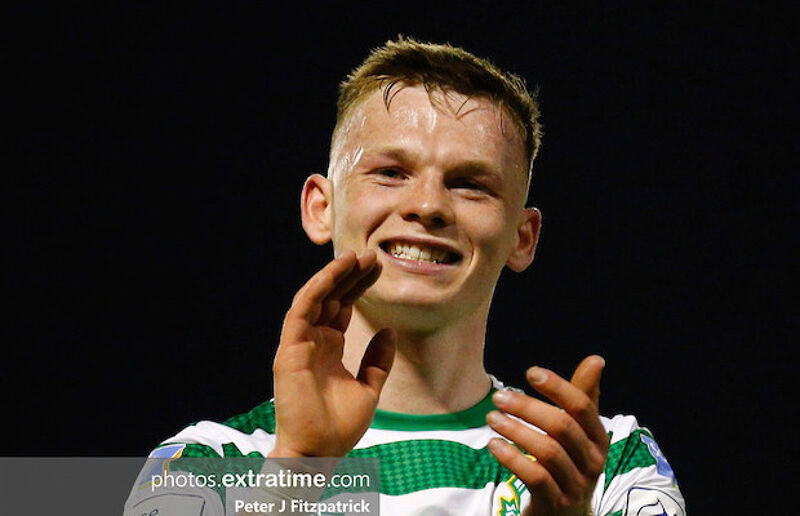 Sligo Rovers came from behind to hold champions Shamrock Rovers to a 1-1 draw in the Showgrounds on Friday night.

Liam Buckley will be pleased in particular with his team’s second half where they raised the tempo against the Hoops to get back into the game through a Jordan Hamilton headed goal after Andy Lyons had given the visitors a half time lead.

Since the sides drew 2-2 in Tallaght Stadium in mid-March, the Hoops had gone on a five game winning streak but that run was put to an end by Liam Buckley’s side who have won their last two games. The Sligo Rovers manager made four changes to his team who earned a 3-2 victory last week against Drogheda United.

The Hoops had come into the game on the back of a 3-1 win over Bohs in the Dublin derby in Dalymount Park the previous week and Stephen Bradley made just the one change from that match with Dylan Watts coming in for Richie Towell.

Both teams are known for their passing style of football and so neither side was helped by the poor playing surface at the Showgrounds.

Alan Mannus was pretty much an onlooker in the opening half while Ed McGinty at the opposite end hadn’t much to do prior to a save mid-way through the half from which the Hoops took the lead from the resulting corner.

Stephen Bradley’s side swept forward down the right with Jack Byrne and Dylan Watts before Ronan Finn centred to Andy Lyons. He played the ball into the path of Danny Mandroiu with his shot turned around the post by McGinty.

Byrne whipped the corner kick in and Lyons leaped high to head home his fifth goal of the season.

There was a few niggly fouls involving Mandroiu and Garry Buckley and eventually referee Rob Harvey’s patience ran out and he put both of them in his book.

Greg Bolger had the only real chance of the opening half for the home team with a shot from outside the box that Mandroiu got a blocking touch on to give Sligo Rovers a corner kick.

Sean Hoare had a header ten minutes from the break that required McGinty to come and collect out in front of him and that left the visitors a goal up at the half-time interval.

It seemed like only a matter of time before the travelling team doubled their lead but Sligo Rovers didn’t let their heads drop under the pressure. Indeed as the second half wore on, the Bit O’ Red began to press the visitors more and while McGinty pulled off a good save from Dylan Watts, the next goal came at the other end on 71 minutes.

Jordan Hamilton did really well to push his header back across goal from a David Cawley cross. It dropped beyond the despairing Mannus dive and just inside the post to level the game.

Stephen Bradley made a triple substitution late on which included bringing on Towell and when he was taken down by Buckley five minute from time, the Bit O’ Red defender got a second yellow card and his marching orders.

The visitors laid siege to the Bit O’ Red goal in the closing period as they tried to find the winner but ten man Sligo Rovers stood firm. It was a case of a couple of points dropped for the Hoops who now trail league leaders Derry City by three points as Sligo Rovers remain in fourth place.