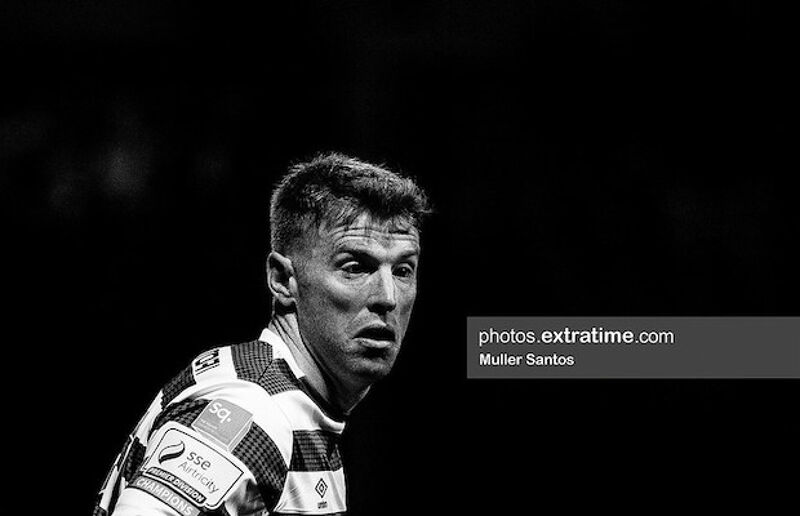 Rory Gaffney grabbed the match winner for the Hoops - his second goal of the league season so far Credit: Muller Santos (ETPhotos)

Shamrock Rovers moved to within three points of top spot after winning 1-0 at home to St. Patrick’s Athletic on Friday night thanks to a goal from Rory Gaffney.

Hoops Head Coach Stephen Bradley gave Sean Kavanagh his first start of the season coming in to replace Andy Lyons who picked up a knock in a goalscoring performance last week in the 2-1 victory over Shelbourne.

Tim Clancy meanwhile was able to call upon his club captain Chris Forrester again after the skipper missed out on the scoreless draw against Dundalk in their last league game.

There was a lack of clear cut chances in the first half with Pat’s claiming the best opportunity but neither side could find the back of the net in the opening half of the game in Tallaght that had the sold out signs up prior to kick off.

The Hoops had the greatest share of the possession in the opening half but it was the Athletic who went closest to a goal in the first half.

That chance came just after the half hour mark as Pat’s broke at speed with Billy King. When the Scotsman cut inside his low shot was pushed out by Alan Mannus diving to his left. The ball came quickly to the onrushing Eoin Doyle but he couldn’t manipulate the ball back on target.

At the other end of the pitch, the Pat’s defenders got themselves in good positions to block a couple of long distance efforts from Rovers – the first saw Tom Grivosti in the correct position to block Gaffney’s effort and then Joe Redmond stopped Danny Mandroiu’s drilled shot.

Eoin Doyle was keeping Pico Lopes on his toes as he led the line through the middle for the visitors. He linked up well with Darragh Burns but the ultimate end product didn’t deliver for the Saints.

The Hoops had a shout for a penalty ten minutes from the break after Jack Byrne’s through ball with the outside of the boot saw Mandroiu bearing down on goal. James Abankwah leaned into the Rovers player who went down in the box but referee Paul McLaughlin waved play on.

The Saints saw two of their defenders pick up yellow cards late in the half. Abankwah went in the book for a tussle with Gary O’Neill just off the pitch in the Rovers technical area while Joe Redmond got his yellow for too tough a tackle on Mandroiu.

Six minutes into the second half and the home side had the lead with Byrne and Mandroiu centrally involved. Gaffney got his second of the season by getting in at the back post to head home a delightful cross by Mandroiu from the corner of the penalty area off a Byrne through ball.

Byrne then forced Anang into a fine full length save just after the hour mark after he picked up Ronan Finn’s pass to shot from the edge of the area.

Substitute Neil Farrugia gave the Hoops some fresh impetus when he came on and Anang twice prevented the former UCD man scoring. Diving at his feet first and then claiming a shot off Farrugia’s right foot effort.

St. Patrick’s Athletic did not threaten Alan Mannus’ goal in the second and so it finished a very good Friday for the Hoops – particularly with Derry City losing at home to Shelbourne.

On Monday in Tallaght Rovers take on a Dundalk side who trail second placed Hoops in third spot by five points. Meanwhile Pat’s go to the Bowl to take on the bottom side.