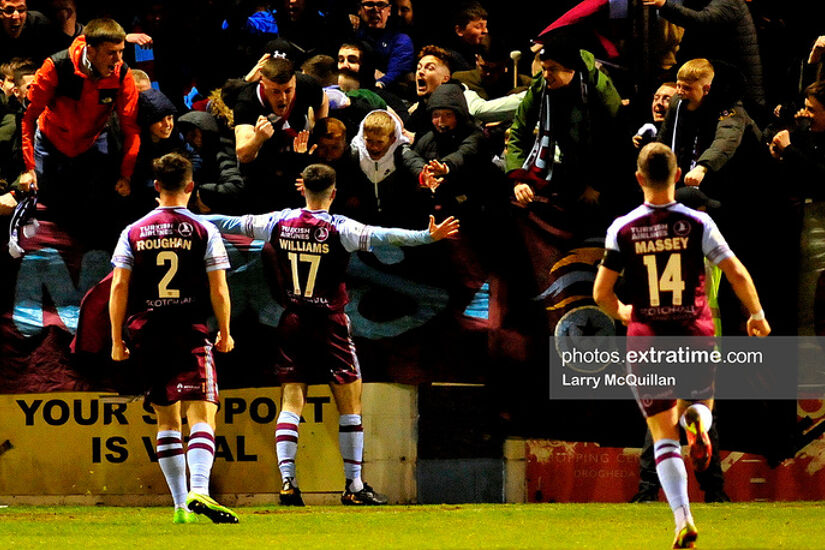 A late equaliser from substitute Dean Williams snatched a point for Drogheda United as they played out a 1-1 draw with Bohemians at a bitterly cold Head in the Game Park.

Despite being dominated throughout the second half, Williams was on hand to finish neatly with two minutes of normal time remaining after Dawson Devoy’s penalty had given the visitors an early lead.

It’s now eleven points dropped from winning positions for Bohemians as they were denied back-to-back away wins as their slow start to the season continues.

Despite the presence of Tyreke Wilson in the starting XI it was midfielder Conor Levingston who wore the armband after much speculation over who would assume captaincy duties for Bohemians.

The game was only six minutes old when Devoy tucked away his spot kick after James Clarke was deemed to have handled Tyreke Wilson’s cross by referee Paul McLaughlin.

In what was a lively opening quarter, Drogs were shooting at sight and had a number of long range efforts early doors.

Bohs were comfortable for the most part but Drogheda had the better of the chances towards the end of the half and Talbot was called into action twice in quick succession. First, he showed brilliant reflexes to deny Georgie Poynton’s volley at the back post before he tipped Darragh Nugent’s shot over from a narrow angle.

Keith Long’s charges didn’t look like doubling their lead before the interval with Sam Long rarely being tested although the Gypsies squandered a couple of dangerous counter-attacking positions.

The second half started in the same lively fashion as the first and Bohs could have doubled their advantage after a swooping counter-attack involving Ali Coote, Devoy and Twardek but Sean Roughan was on hand to put his body on the line and deny Promise Omochere a tap-in.

Moments later Liam Burt stung the palms of Long in the Drogheda goal on the ground of his wonderful goal from the halfway line last season.

Kevin Doherty’s side struggled to gain a foothold in the second period and introduced Ryan Brennan, Dylan Grimes and former Shamrock Rovers striker Dean Williams but it was Bohs sub Jordan Flores who went closest off the bench.

Known for scoring sensational goals he tried his luck at an acrobatic effort after Wilson stood the ball up but his bicycle kick skewed wide.

While Bohs struggled to create any clear cut chances to put the game to bed substitute Junior Ogedi Uzokwe was inches away from getting on the end of a superb Burt cross before Devoy had a tame effort saved by Long when perhaps he should have slipped Ogedi-Uzokwe.

Remarkably, the visitors were made to pay as Drogheda’s first meaningful attack of the second half with just two minutes of normal time remaining resulted in a brilliantly worked equaliser from substitute Dean Williams.

It was a goal made from the bench as Grimes’ pull back was slammed home from the onrushing Williams who enjoyed that as a former Shamrock Rovers player.

Omochere had a chance to win it deep into stoppage time but Drogheda held on for their third successive draw.