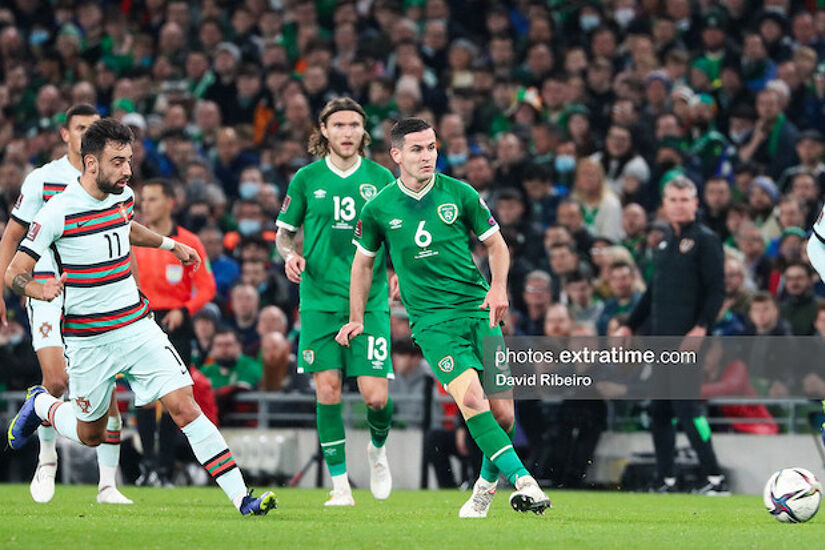 Josh Cullen: ‘Anderlecht has one of the most respected academies around the world. They have developed some really good players who have gone on to play for some top clubs.’

Republic of Ireland midfielder Josh Cullen is feeling confident about his side’s chances of coming away from Saturday’s friendly against Belgium with a good result.

Stephen Kenny’s charges have lost just once in their last ten matches ahead of welcoming the number one ranked team [albeit weakened] in the world to the Aviva Stadium. Cullen is hopeful that the momentum they have gathered can continue in front of what is expected to be a capacity crowd at Lansdowne Road.

“They are number one in the world,” Cullen told the media at Abbotstown. “Some of their most experienced players won’t be there but looking at their squad and the calibre of players they have it will still be a tough test and they are a top, top side.

“They like to be possession-based. We have analysed them as a team and we know they are possession-based and like to dominate the ball. They also have good athletes as well and they are an all-round strong side.

“It will be a good test for us but I am confident that hopefully we can put in a good performance and get a good result against a top team.”

Cullen, who came through the ranks at West Ham United, raised a few eyebrows when he took the decision to move to Belgian side Anderlecht in search of regular first-team football in 2020. However he has become a vital cog in the heart of their midfield making 32 appearances for Vincent Kompany’s side this season.

“Anderlecht has one of the most respected academies around the world, a lot of players have come through there and gone on to have great careers. I think it is great to see the investment into the grassroots side of football and the facilities that the young players have to practice and hone their skills.

“They have developed some really good players who have gone on to play for some of the top clubs around the world and obviously make their national team a very strong side.

“It’s a 20 year or so project to get to where they are today and it takes time but definitely they are an example for other small to medium nations in Europe to follow and hopefully we are in the process of doing that as well.

Despite having a ‘golden generation’ silverware hasn’t been forthcoming for Belgium under Roberto Martinez and previously Marc Wilmots and with veteran figures like Kevin De Bruyne, Eden Hazard, Jan Vertonghen, Toby Alderweireld, and others the wrong side of 30 there are rumours that the next conveyor belt of young talent coming through could eclipse the current stars.

The two standout names are Jérémy Doku [formerly of Anderlecht] and Cullen’s Anderlecht teammate Yari Veerschaeren (20) who has found the net seven times this season.

Despite the absence of some experienced players and none of the current squad amassing 50 caps, Belgium still have some major players coming to Dublin on Saturday according to Cullen.

“Yari is a very good young player. He has got a lot of goals and assists for us,” said the 25-year-old. “There are a few big names missing from their squad and some experienced players but there is definitely a lot of talent coming through.

“They have Yari from Anderlecht and a few other players from the Belgian league who are good strong players and we will have to be at the top of our game to compete with them.

“They still have the likes of Tielemans, Origi, Batshuayi, Benteke in the squad so it’s by no means a really inexperienced squad they are still taking on the mantle from the golden generation from before.

“We know from analysing their squad and their team that they have some top players and we are looking forward to the challenge.”

Shane Duffy: ‘We all believe in Stephen (Kenny) and I think the progression we have made over the last two years is there for everyone to see’ https://t.co/CD6JtFEvqp pic.twitter.com/AklYFE1PaQ