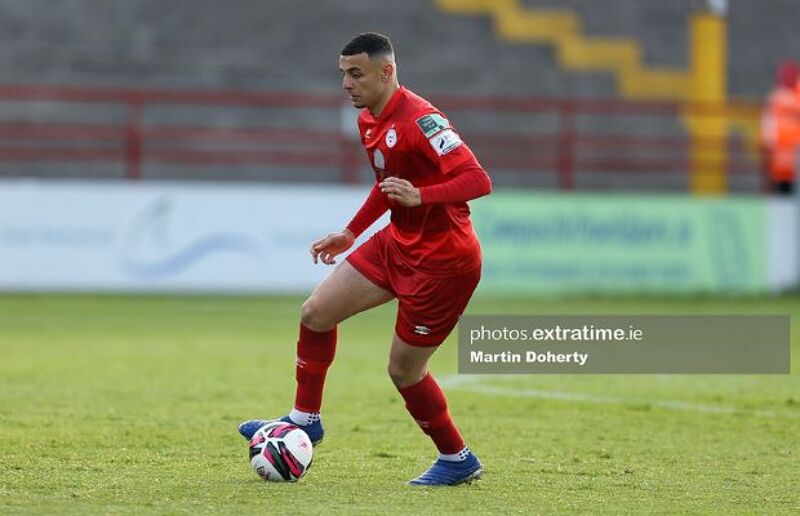 Finn Harps have announced the signing of Yoyo Mahdy from Shelbourne FC.

The centre-forward scored four goals in sixteen appearances for the Dublin side last year.

Mahdy, who was born in Egypt, began his career with Mervue United before moving to Limerick’s under-19 squad in 2015. The forward was promoted to Limerick’s senior side later that year.

He swapped Limerick for UCD ahead of the 2017 season and scored 34 goals in 89 appearances for the Student’s.

The signing of Mahdy will be a boost to Harps next season following the recent departure of Tunde Owolabi. The 26-year-old hit the net ten times in 2021 and moved to St. Patrick’s Athletic last month.

Harps manager Ollie Horgan spoke of his delight at the signing and thanked the club’s “500” club for helping finance the transfer.

“’m delighted that Yoyo has joined the club,” Horgan told the club’s website.

“He’s eager to get going and prove himself back in the Premier. It’s a testament to the support of the 500 club that we’re able to bring the likes of Yoyo in who will hopefully be a big player for us in the season ahead. Fans getting behind us is absolutely vital to our success in what will be a savage division.”

Mahdy also said that the club’s reputation, and fanbase were factors in his decision to sign.

“I’m really excited to be joining the club. Ollie got in touch and we’d a good chat about his ambitions for the club and his plans for me and where I fit in. A big reason I wanted to come to Harps is they’re an established Premier Division club at this stage, with some great players, a passionate fanbase and it’s really exciting to be a part of it.”

Vera Pauw: 'This tournament (Pinatar Cup) provides us with three games so that is ideal for our preparation to work with the players and give them game-time' https://t.co/VeQQPyaJsJ pic.twitter.com/N6luHn7rH6