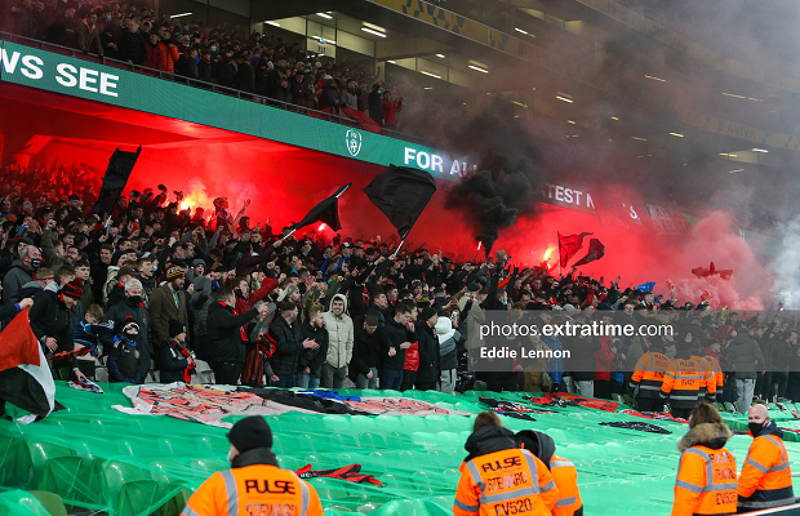 Bohs fans packed into the South Stand at the Aviva Stadium for the FAI Cup Final between Bohemians and St Patrick's Athletic on Sunday, 28 November 2021. Credit: Eddie Lennon (ETPhotos)

Although Robbie Benson’s winning penalty broke Bohemians’ hearts, last Sunday’s FAI Cup final was a real triumph for both clubs, and for the FAI. The clash between Bohemians and St Patrick’s Athletic drew a crowd of 37,126, the biggest crowd for an FAI Cup final since 1968.

It was difficult not to be in awe of Sunday’s spectacle at Lansdowne Road. The fact that it was the first all Dublin final since 2000 only added to the occasion. Bohemians were looking for their first silverware since 2008, while the Saints had last won the cup in 2014. To put Sunday’s crowd of 37,126 into perspective, the 2008 final drew 10,281 at the RDS, while 2014’s decider was played in front of 17,038 at the Aviva.

Both sides emerged from the tunnel to thick smoke, burning flares and a thunderous roar. It felt enormous. It felt different. It felt like what every cup final should feel like.

The rebirth of the senior men’s international side coupled with the feel-good factor around the women’s squad have had a part to play. The ever-growing interest in the League of Ireland, young, exciting players and many club initiatives has driven the record ticket sales also. Community work, volunteer work and social media campaigns by both clubs, and the FAI all contributed to the ticket sales, as the Aviva Stadium record (36,101 in 2010) was also broken.

Speaking to Extratime.com, St Patrick’s Athletic captain Ian Bermingham said, “football in Ireland is starting to capture the imagination with the senior Ireland team and Stephen Kenny being a league of Ireland man too.”

“It’s the quality of the players. The younger players play with no fear. We have really exciting players. I hope it keeps growing and growing. Hopefully it’s a sign of things to come and the attendances can get better because it’s a brilliant league.”

“Once we got word quite early after the final had been confirmed that ticket sales were going well, it took off from there,” said Moore.

“We made an effort to try and push as much as we could on our own platforms.

“It was a massive effort from the whole team. There’d be four or five full time staff that work away from the football, the CEO, media, head of ticketing, the community officer and director of football and a huge number of volunteers that we have.

“Dave Morrisey the community officer went into all the local schools. We got flyers printed up and put up in local shops and the local area. I think a mixture of everything, socials and feet on the ground.”

“To have 37,000 at a final is hopefully the start of something. Obviously, it depends on the teams in it because if you have a smaller club they are probably not going to bring as many as a St Pat’s or a Bohs would.

“But in the new FAI, there’s 12 now in the league office and they made a big push themselves and we worked closely with them. Maybe a little bit more investment from everybody. The appetite from the FAI and league office is there.

“It would be great to aim for 40,000 plus next year and possibly a full house. The 37,000 that were there made it sound like it was full. It was an incredible atmosphere.”

Daniel Lambert, Chief Operating Officer at Bohemians explained how the Dublin 7 side pushed their own ticket sales, leading to a 200% increase compared to their last cup final in 2008.

“There were a few things at play,” Lambert said.

“The two Dublin clubs first time in 20 years was an obvious one. People also being starved of live football helped in that.

“From a Bohs point of view we’ve known there's lots of things that are showing us the fanbase is growing a lot. Dalymount is selling out a lot, there are record numbers of members and season tickets, merchandise sales, the crowds in the Aviva, it was unbelievable to see.”

“To have 18,000 after a 13-year period where we haven't won anything, I think we’re running the club in a better way. Keith obviously has exciting players too. It’s really satisfying. I never thought I'd see that amount of Bohs fans at a game.”

“We did things around the local area with bunting and flags, volunteers helped with that. Dublin City Council did a really nice thing on the north and south quays with the flags.

“That was really good and fair play to them for doing that. Some volunteers also went out and delivered 1000 leaflets around the local area.”

Lambert said that the recent success of the youth academy at Dalymount has had a huge impact on the club too.

“Our youth director and committee did a lot of work. Last time we were in a cup final we had six youth teams. Now we have fifty. That makes a big difference because they are families.

“It’s more of a GAA model where the son or daughter may play for Bohs, so the parents or grandparents go along as well. That really helps build attendance and interest.”

Although Sunday’s final was a success off the pitch, Lambert says that this is only the beginning and that the league should aim higher in the years to come.

“We have loads more work to do. It’s not like we’re there or anything like that. There's always more you can do.

“We have worked hard in lots of areas to make the club more attractive to people. I don't think you necessarily need to have a really low-cost entry to a cup final. It's great value obviously and you don't want to price anyone out. But I'd like it to get to the stage where cup final tickets are 20 or 25 Euro and it can sell out, has that appeal and it can drive revenue for the clubs and the FAI.”

Bohemians’ assistant manager Trevor Croly also spoke to Extratime.com and praised the travelling support at the Aviva despite losing the cup-final on penalties.

“Bohs fans are brilliant, the numbers they come in and the support they give. Everywhere we go we bring good support. I think that's down to the team, we’re exciting.

“St Pat’s are a good team, so you have two good teams going at it, I think that was a factor. The numbers were phenomenal.”