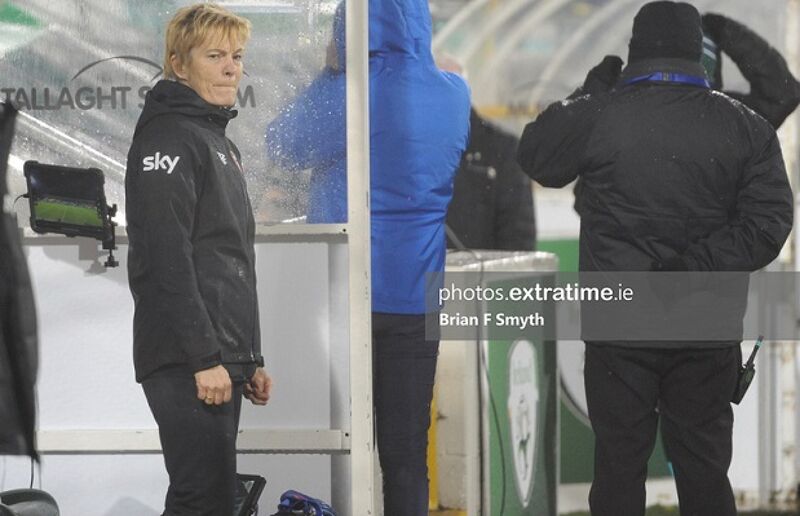 The Republic of Ireland women’s team regained second place in group A after a resounding eleven goal defeat of basement side Georgia.

Georgia arrived in Dublin off the back of three defeats by Sweden, Slovakia and Finland conceding nine and scoring none.

In their previous qualifying group for the European Championships, they lost all ten games and conceded 45 goals.

On a night when England won by 20 (yes twenty) goals to nil at home to Latvia and shortly after Northern Ireland defeated North Macedonia eleven and nine nil respectively, the gap between the haves and the have-nots continues to grow.

“We had a two-tier system and its time to bring that in again,” said Ireland manager Vera Pauw.

“I warned UEFA before that there is a lot of opportunities for the top-level teams, the top-level countries, and they are drifting away from the rest.”

“It’s great that the game develops at that level… I’ve spoken about that before… the second tier and the tier under to gain more experience and more opportunities to train with each other so that we can close the gap. In this way we cannot close the gap,” said Pauw.

The Irish team showed professionalism in their win over the women from the Caucasus, pushing relentlessly for more goals. The last came in the 92nd minute, a floated free kick from Megan Connolly which deceived everyone.

“I’m sorry for Georgia but we need to think of our goal difference and that is why we didn’t make a party of it, we kept going.”

The team who racks up the biggest score line against Georgia might well pip second place, Ireland’s competitors for that position which are Finland only defeated Georgia three nil, admittedly that game took place in Georgia with Ireland having to travel there next June.

The 11-0 win for Ireland was a record in either men’s or women’s football. The record Irish women’s win was a 9-0 win against Montenegro while the Irish men’s senior team defeated Malta 8-0 in 1983.

Pauw spoke on the pitch after the game; “You couldn’t have hoped for anything like this. We were really focused, and we were so focused on getting goals, you would have saw that in our pre-match meeting. It was all related to that and to get variety in our play.”

Pauw changed the shape of her team after a disappointing draw at home to Slovakia last week. The Dutch influence on this team was clear to see, perhaps Pauw took inspiration from Louis Van Gaal’s deployment of the 3-4-3 formation he deployed in the 2014 men’s World Cup.

“The game-plan was 3-4-3, so a little alternation with Denise (O’Sullivan) and Lucy Quinn in the pockets, and with wingers, far forward and constantly threatening with a lot of variation in the play through the centre and the side.

“Balls in the box, winning the second ball and if we cannot shoot immediately, we would go out again, start again, to the other side so we would have crosses and shots from the third line, outside the box, but also putting balls in from the different sides,” said Pauw.

Kyra Carusa led the line in the absence of Heather Payne and Leanne Kiernan, something Pauw was quick to praise.

“Carusa was not much in the game but what she did really well was stretching the play and not coming into the game, and that is so hard when you are dominating so well and you can hardly get the ball, because she kept the back line away.

“The strength of this team, and I’ve said it before, there are players that stand out and catch the eye, but there are so many players that are willing to sacrifice themselves … for this team. So, her role in stretching the team, and later bringing on Saoirse Noonan, we brought her on for her headers, that was so important,” said Pauw.

Ireland will face a much sterner test next calendar year, with friendlies coming up in the next international window before a trip to Olympic silver medallists Sweden next April.