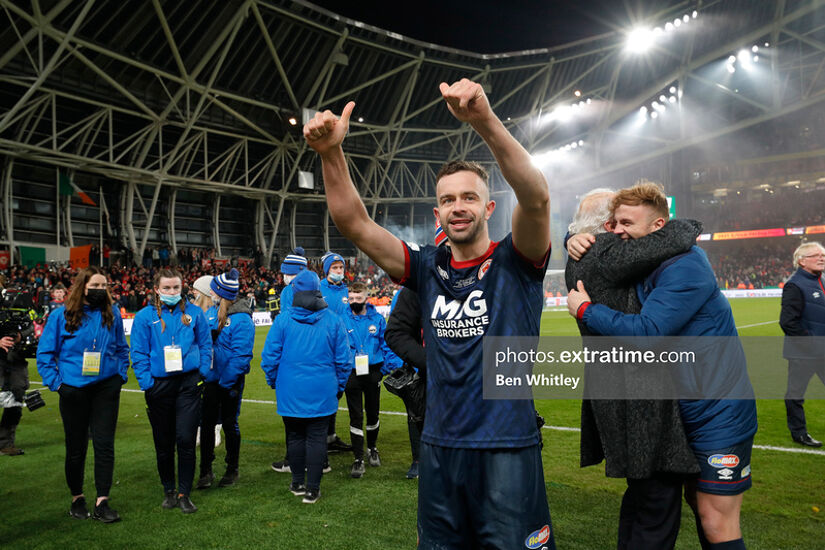 
Seán O’Connor reports from the Aviva Stadium.
Robbie Benson spoke to the media following St. Patrick’s Athletics’ dramatic FAI Cup Final penalty shootout win. Benson stepped up and slotted the winning penalty, to bring the FAI Cup back to Richmond Park after a seven-year absence. It had looked like Bohs would win the cup after Benson’s teammate Chris Forrester missed his spot kick. However, after Tyreke Wilson and Keith Ward missed the target, the ex-Dundalk striker made no mistake to win his second, and St. Pats’ fourth FAI Cup.
“It was brilliant,” Benson said.
“Probably extra special because of not having crowds for a long period of time. There was a good mood in the camp all week. A lot of the lads embraced having the crowd there, looking around before the game. They really relished it.”
After leaving Dundalk ahead of the 2020 season, many around Benson were unsure if it was the right move to make. However, after winning three league titles and an FAI Cup, the 29-year-old wanted a fresh challenge.
“It would've been easy to stay having been so successful there,” Benson said.
“I just had the feeling that it was the right time to go. A lot of people said, “what are you doing leaving?” I had a vision that I would have moments like this with St. Pat’s. Thankfully it's materialised today. I felt that I had done everything that I could have done there. It's a new challenge in my career. I knew it was the right thing to do personally.”
Speaking about the impact of Stephen O’Donnell, who was previously Benson’s captain at Dundalk for three seasons.
“As a teammate and captain, he was a great leader always. He was someone you could have intelligent conversations about the game. He taught me a lot as a player. It was no surprise he brought that on to management. All the lads love him inside and it's great he's now a cup winning coach.”
Benson’s winning penalty was the end to a difficult week for the midfielder personally, following the passing of his grandmother Mary.
“My grandmother passed away last weekend,” Benson said.
“I was hoping I could have a moment myself for my dad because he's had a tough week. That made it extra special. That's what you dream of a cup winning final penalty. And everyone would have blamed Chris (Forrester) for missing if I missed!”

Ian Bermingham: 'Football in Ireland is starting to capture the imagination" https://t.co/62qpcjHxjj pic.twitter.com/LCxQKmOJFA