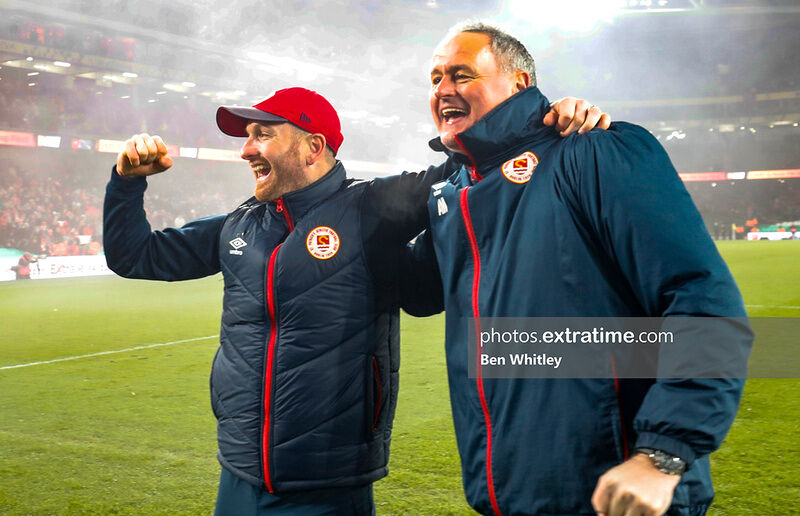 After finishing second in the SSE Airtricity Premier Division, St. Patrick’s Athletic finished out their 2021 season with a dramatic penalty shoot-out win in the FAI Cup Final. It was the fourth FAI Cup win for the Saints and their first since 2014.

“It’s more relief when you're on the coaching side of it, when you're a player it’s more absolute jubilation,” Saints head coach Stephen O’Donnell told media after the game.

“This is the icing on the cake. I’m delighted that some players can add to their medal haul and most of the others won their first senior medal. It’s great for their confidence. Now they know they've been there and done it, and they should kick on.

“It was such a turbulent extra-time. We had a good foothold in the first half of extra-time then Chris Forrester scored. Rory Feely equalised then right at the death. Vitezslav Jaros pulled off a couple of unbelievable saves. It’s swings and roundabouts.”

Sunday’s showpiece was the seventh final to go to extra-time in the last eight years. Asked about this remarkable statistic, O’Donnell explained that his side were well aware of the possibility and prepared well.

“It's unbelievable the amount of FAI Cup finals that have gone to extra-time and penalties in recent years. We practiced penalties for the last week to ten days, and I had a feeling it would go the full distance. Our lads were in a good rhythm with penalties during the week.”

After arriving on loan from Liverpool in February, Czech under-21 international Vitezslav Jaros has been terrific for the Saints in 2021.

”He's the best 20-year-old I've ever come across,” O’Donnell said, as scouts from Liverpool watched on at the Aviva. Jurgen Klopp also sent a message of good luck to the St. Pat’s shot stopper.

“It’s plain to see he will play at a higher level. He’s brilliant and makes big saves. The occasion doesn't get to him. He’s so composed. He looks like a man and acts like a man.”

Speaking about the impact of Jaros and Robbie Benson coming to Richmond Park, manager Alan Mathews’ said, “They've set higher standards and set the bar. They come to training every day to be excellent, that rubs off on players. It has rubbed off on the group. The level of intensity and application has gone up a couple of notches. We’ve brought in players that demand things are done in the right way every day.”

O’Donnell also refused to speculate about his future at the club.

“We’ll see, we’ll get all that decided over the next week or two. We’ll see what happens. Today we are just buzzing to be winning with the lads and staff. It’s been a journey. To end up November 28th at Aviva with over 37,000 and on the right side of winning the FAI Cup, I’m just buzzing.”