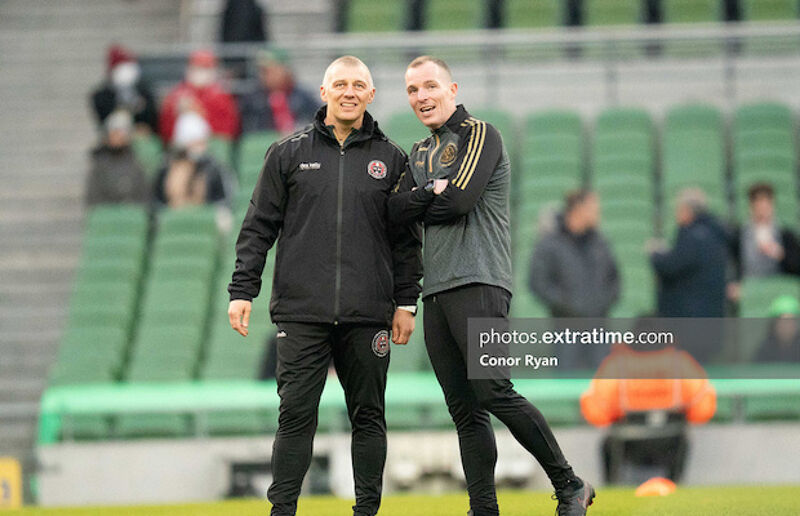 Croly admitted that while the Saints began the cup final better, Bohemians had the best of the chances on the day. Liam Burt, Ross Tierney and Promise Omochere all had opportunites to put their side ahead, but all lacked a cutting edge in the final third all game.

It was the third final in the last five years to go to penalties, and Bohs looked like winning it when James Talbot saved Chris Forrester’s spot kick. However, it wasn't to be for the side from Dublin 7 as Tyreke Wilson and Keith Ward both missed their efforts before Robbie Benson slotted the winner for St. Pat’s.

Facing no European football next season, and the possibility of losing key players to transfers, Croly cut a disappointed figure in the Aviva’s press conference room afterwards.

“It felt like a close game. You go ahead in the penalties and you think you are going to win it and then it’s gone. It’s quite devastating.

“I thought St Pat’s started the game better. We came into the second half of the first half better and we got on top of them. The second half was nip and tuck with counter attacks. I just feel we had better chances.

“Unfortunately, you remember the difficult days and they are the ones that spur you on. You got to use it as motivation to go forward.”

After missing recent games with a calf issue, Georgie Kelly returned to the starting eleven today only to be withdrawn on the hour mark. The Donegal man, who is rumoured to be on a move to Portsmouth, had a quiet game with Lee Desmond and Paddy Barrett limiting him to just a few chances.

“We were aware he wouldn't have 90 minutes in him, it was impossible” Croly said. “We don’t have an abundance of centre forwards, he nearly scored just before he came off, but he was empty at that stage.”

The Aviva Stadium record for FAI Cup finals was broken on Sunday, as 37,126 supporters flocked to Lansdowne Road to see the first all-Dublin final in 21 years. extratime.com asked Croly for his thoughts on the record crowd.

“Bohs fans are brilliant, the numbers they came in and the support they gave. Everywhere we go we bring good support. I think that's down to the team, we’re exciting. St. Pat’s are a good team, so you have two good teams going at it, I think that was a factor. The numbers were phenomenal.”