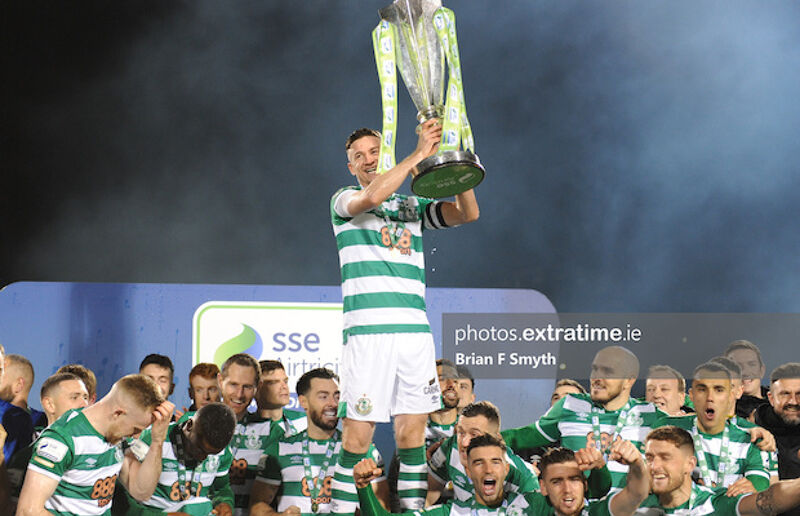 Rovers’ star player, young player and best new signing could well have been awarded to 23-year-old Danny Mandroiu but wouldn’t make for the most interesting article so we’ll go for Dylan Watts here as he was arguably the most influential player for the Hoops this year.

With the departure before the season kicked off of Aaron McEneff and Jack Byrne (who re-signed this week with Rovers on a two year deal), questions were asked about the creative spark in the Rovers midfield.

Watts stepped up on set piece duty for the Hoops replacing Byrne and he consistently provided the killer pass for Rovers – he racked up a remarkable 15 assists in the league campaign.

When Watts went missing due to injury in the middle of the season, the Hoops proved venerable. The seven matches he missed saw Rovers pick up just eight points with three defeats including their first league loss since September 2019. Watts returned, Rovers reclaimed top spot and never looked back.

The Hoops had hoped to field a second team in the First Division this season which would have seen a team made up with of young players from their Academy, only for resistance from virtually all other clubs in the league scupper that plan.

Both Rovers’ under-17 and under-19 sides won their National Leagues and the challenge for the Hoops is for players from their Academy to come through from their underage setup to play week-in week-out for the first team - in the last home game of the season the average age of the starting XI was 30.4 years of age.

Stephen Bradley has given places on the bench for plenty of teenagers from the Academy but only Aidomo Emakhu has got regular game time and he looks the most likely to step up to be a starter in the Rovers Premier Division side.

As a 17-year-old he became Rovers’ youngest ever goalscorer in Europe when he got the late winner in thethe club’s 1-0 win over Albanian champions KF Teuta in Europa League qualifiers in August. Overall he made 14 appearances in all competitions scoring two goals.

No player since legendary striker Gary Twigg have scored more league goals in one season than Danny Mandroiu’s tally of 15. Over the winter the midfielder had made the move from Dalymount Park, where he was frozen out last season, as Stephen Bradley looked to replace a Jack Byrne size hole in his midfield and Mandroiu delivered from the get-go.

He got crucial goals from early in the season starting in Rovers’ first home league game of the year in the 2-1 win over Dundalk and injury time winners away to Drogheda United and St. Patrick’s Athletic. His end of season form propelled Rovers over the line to win the league title as he scored nine goals in an 11 game period starting in mid-September.

If you haven't checked out our Audio Described Commentary by the fans for the fans, here's what you are missing.... Friday's late winner as told by Denis
This service is available free of charge for all games; home and away https://t.co/j3VAFvhSYE pic.twitter.com/CofGJkiZPu

Ahead of the start of the season, the extratime.com team predicted that the Hoops would be champions (see here).

Rovers backed up the expectations of the extratime.com team and most commentators by winning the league even if some seemed to question the quality of the achievement of Stephen Bradley’s side.

They won the title by a massive 16-point margin – only the 2008 Bohemians team with a 19 point lead have won the league title by more – and set a new club record for number of wins in a league campaign (24) and points earned in a season (78).

Rovers pretty much led from pillar to post as they were always up there towards the top of the table even if they required late goals to pick up points particularly in the opening stages of the season (they claimed additional points from goals scored in the 87th minute and later in four of their first six league games).

Having gone through the 2020 title winning season unbeaten, the Hoops continued in the same manner going without defeat till mid-May – winning eight of their first 11 games. It was a run of 33 games unbeaten that eclipsed the previous record of 30 held jointly by a Rovers side from the 1926/27 season and Athlone Town in 1980/81.

Their run came to an end in Oriel Park with a 2-1 loss to the Lilywhites and they followed that up with their only home defeat of the season when Sligo beat the Hoops 1-0 in Tallaght to take top spot off Stephen Bradley’s side.

The Hoops got back to winning ways with a late win over Longford Town. They would earn three wins thanks to injury time goals against De Town during the season.

This was a period when Rovers really struggled with injuries as across an eight game spell, they won just two and drew three in a period when their squad was severly stretched due to injuries - captain Ronan Finn missing four matches, Joey O’Brien five and Dylan Watts seven.

The 1-0 loss to Bohemians in Dalymount Park in June proved the low point of the league campaign and when they followed that up with a draw at home to Drogheda United in front of 1,000 spectators as fans finally returned following COVID-19 shutdowns at the half-way point of the league campaign there was a three way tie at the top of the table with St. Patrick’s Athletic and Sligo Rovers.

However, Rovers won nine of their next ten matches to build up a lead that they never let slip. By the time Finn Harps came to Tallaght at the end of October, the Hoops knew a win would secure them the title. The 3-0 victory saw them claim their 19th title in the 100 year history of the League of Ireland – wrapping up the title with three games remaining.

It wasn’t really a surprise that Rovers rounded off the season with a come from behind victory earned with a late winner in the 88th minute as Graham Burke scored two second half goals as Rovers beat Drogheda United 2-1 just prior to picking up the league trophy.

How Shamrock Rovers won the league - 19:25 is Bradley time for the Hoops with late goals and league title success https://t.co/fVycQQh5ME pic.twitter.com/0lu7y028Bf

The cup exit probably represented the overall low point of the season coming a few days after their exit from Europe. The Hoops were dumped out of the cup at Dalymount Park by a Bohs team who finished 26 points behind them in the table and yet beat them three times along with a draw from the five games between the sides this season in the league and cup.

The league success of this Rovers side in the last two seasons came on the back of the 2019 FAI Cup triumph as Stephen Bradley steered the Hoops into ending a 32 wait for their 25thFAI Cup crown.

Last season they felt they should have earned a double having taken a deserved lead in the cup final against Dundalk, only to run out of steam as the Lilywhites overpowered the Hoops in extra-time in an empty Aviva Stadium.

Having won the league without a loss last year, the task was to retain that title which they did and go one better than last year and secure their first double since 1987. Rovers were drawn against Galway United in the first round and the Hoops did what they always do against United and that was win – Rovers have won their last 20 games-in-a-row against Galway.

That’s 20 competitive wins in a row for @ShamrockRovers over Galway United pic.twitter.com/BUGW229C3c

The Hoops 2019 FAI Cup final win came after a memorable semi-final victory in a Dublin derby over Bohs in Dalymount Park. Supporters of the Gypsies will be hoping for something similar as having beaten the Hoops in the second round this season they have gone on to earn a place in next weekend’s final.

In that cup win for Bohs in Dalymount, the Hoops were missing a number of players due to injury but didn’t have too many complaints on being beaten by a better team on the pitch that day.

With both teams down to ten men, Pico Lopes scored a 78th minute equaliser, only for the Gypsies to be the team to get the late winner -Andy Lyons scored three minutes from time to send all of Dalymount Park into delirium (and it was all of Dalymount as the game was played out without any away fans present).

The Hoops played three rounds in Europe, winning three games in a row in European competition for the first time ever and made the play-off round in the UEFA Conference League. However, despite all that some view Rovers’ run in Europe as a failure, when it is more likely a missed opportunity.

Rovers weren’t seeded in the Champions League qualifiers and came up just short against Slovan Bratislava. They lost the away leg 2-0 and led 2-0 in Tallaght with 20 minutes to go before Vladimir Weiss scored a winner for the visitors when the home team felt Pico Lopes was fouled in the build up to the goal.

Rovers dropped into the Europa Conference League and got the benefit of a bye into the third qualifying round where they played Albanian champions KF Teuta. Aidomo Emakhu got the winner in the first leg in Tallaght, with Rory Gaffney scoring twice in Albania to give the Hoops a 3-0 win and a place in the play-off round.

The Estonian champions were a more formidable outfit in 2021 and they punished Rovers’ defensive mistakes particularly in the first leg. Flora won at home 4-2 and followed that up with a 1-0 win in Tallaght Stadium to see the Hoops exit Europe one step from the group stages.

Three-in-a-row will be the focus but it won’t be easy with the expectation that both St. Patrick’s Athletic and, in particular, Derry City will be stronger next season.

Winning the league title brings rich rewards with prize money from the FAI and UEFA and, critically, a berth in the champions route of European competition. The Hoops failed to exploit that advantage this year and so their task next year will be to make the group stages of a European competition for the first time since 2011.

The thinking is they will be even better placed to do so in 2022. As the league concluded this week, the eye catching signing was the return of Jack Byrne to Rovers but almost as importantly was the news of goalkeeper Alan Mannus signing on for one more season.

He has 84 clean sheets in league action (100 in all competitions) - only Alan O’Neill (87) and Barry Murphy (97) have kept more in the league. Murphy played 215 league matches for Rovers conceding 196 goals, while Mannus has played 168 matches so far in the league conceding 114 goals.

Rovers’ home form was superb this season losing just two matches in Tallaght all season (to Sligo Rovers and Flora Tallinn) but there is certainly room for improvement away from Dublin 24.

They played 22 matches at home across all competitions winning 15 and drawing five but away from home across the league, FAI Cup and Europe they lost eight of 22.