Lee O'Connor: 'I've accumulated a lot of caps, a lot of experience at underage level, so it is up to me to help the young lads through at times when things get tough' 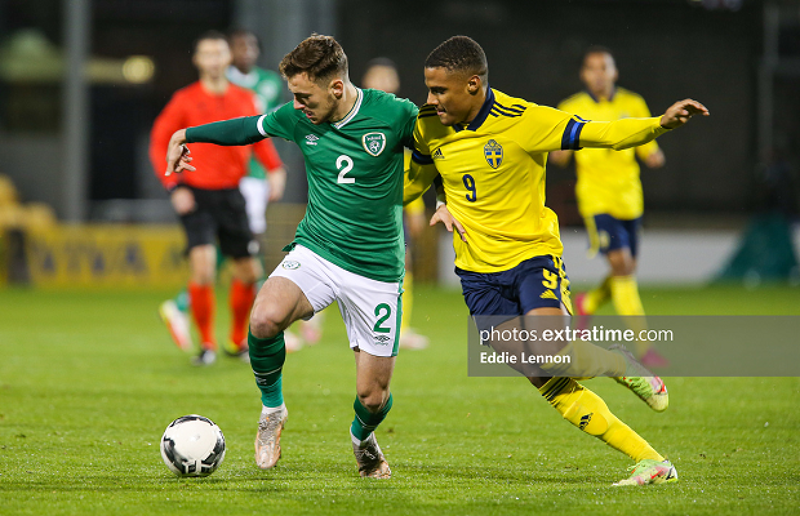 On Wednesday afternoon, the FAI released a short statistical break down on Lee O’Connor’s exemplary performance against Sweden.

The Waterford born full-back covered 10.6km with 2.12km clocked at high intensity. There were 82 calculated accelerations, something which his direct opponent Anthony Elanga knew all about.

It was clear that the Irish backroom staff did their homework in this area trying to negate Elanga’s attacking prowess by forcing the winger to track O’Connor’s incessant running.

O’Connor has become one of the most capped Irish underage players of all time, amassing well over 50 caps from under-15 level right up to under-21. His wealth of experience has been key.

“It's quite a young team. There's a lot of new faces, young lads, so it does fall on a lot of us. Me especially, I've accumulated a lot of caps, a lot of experience at underage level, so it is up to me to help the young lads through at times when things get tough.”

“Bar the blip in Montenegro, I think we've got better as each game has come. I know we were disappointed the other night against Italy, but we weren't maybe as great on the ball, though the defending was okay at times. I think we put it all together today, I think we defended excellently for 90 minutes, and we played good football as well,” said O’Connor.

The Irish under-21 team have never qualified for a European Championships, something O’Connor wishes to rectify.

“This is my last campaign with the underage setup, (qualifying) is something I want to do. We all said that we want to be the first 21s to get there and that's put us in with a good shout come March.”

Ireland have now defeated Sweden three times in a row at this level. A 3-1 win away from home, followed by a 4-1 home win and now a 1-0 victory, O’Connor has featured in all of those games.

A win against the same opposition in the next international window will be paramount.

“We've shown tonight we're definitely a match for them, so we'll go high on confidence after that. Again, it'll be a tough game, Sweden away is always a tough game, but we'll be up for it.”

Another man of the match performance from O’Connor will certainly aid Ireland’s hopes of finishing in the top two of the group.

Ollie O'Neill: 'I believe I’m good enough to be here. I’m delighted with the call up but I’ve no doubts in my ability to be here' https://t.co/q4CPomYzy6 pic.twitter.com/BkHqHr7Auj