Phil Trill: 'My role is to push these girls on to the highest level they can be, and I believe we’re successful in that' 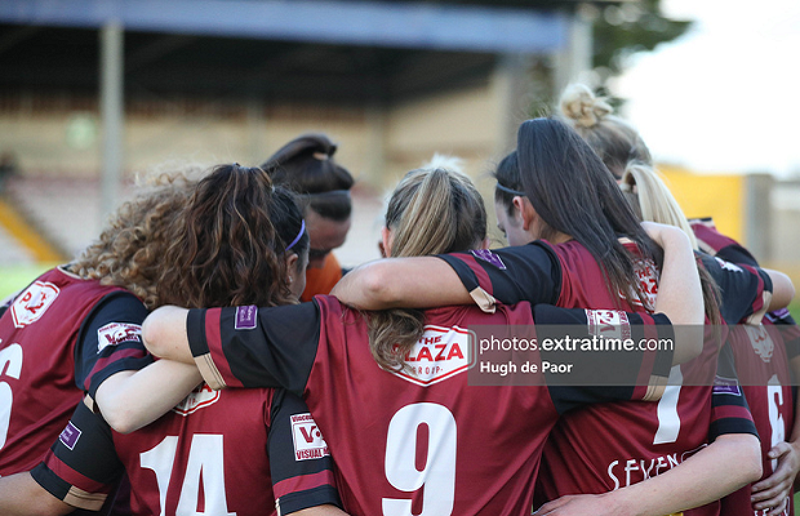 The Tribeswomen are League and Cup winners at udner-19 level for 2021. Credit: Hugh de Paor (ETPhotos)

Galway WFC were crowned under-19 Cup winners on Sunday evening after a 1-0 win over DLR Waves on the banks of the Corrib.

The win capped off a stellar week for the side with a 6-3 win over Athlone Town last week earning them the under-19 League title, meaning the Tribeswomen are double winners.

Waves put in a strong performance on Sunday however, and it took until late in the second period of extra-time for Galway to earn their winning goal.

“It was really rough. DLR really put it up to us,” Galway youth development manager Phil Trill said, speaking to extratime.com after Sunday’s game.

“Last week when we were up there, they had a different squad to now, but they were still dogged and tough to beat.

“In the long run the girl that got sent off made the right decision because it kept her team in the game.

“We were misfortunate in our finishing that things were just going wide. They were dogged and Laura [Heffernan] is a fantastic operator, the only underage final we’ve ever lost was to Laura so there is that history there.

“It was always going to be one of those kinds of games where a nick off someone would settle it and the further it got into extra-time, I felt that it could go either way, but our drive and determination was phenomenal.”

Trill continued his praise of the strong Waves side that only just lost out on Cup success to Galway.

“DLR were fantastic today, they set up and they knew what they had to do, they played a 4-5-1, they were dogged in midfield, and we struggled to break them down in the first half.

“In the second half we created a couple of chances, but I just felt we were that bit fitter especially having the extra player towards the end and we were constantly creating chances.”

This isn’t the first success for Galway at academy level with their under-17 side, featuring many of their current under-19 players, completing a League and Cup double in 2019.

Many of the players in that under-19 squad have made a significant impact at senior level too with several lining out for the Tribeswomen in the WNL on a regular basis.

Shauna Brennan and Abbie Callanan, who featured in Sunday’s final, had even played in Saturday’s senior game against Peamount United with both players getting on the scoresheet as they defeated the Dublin side 5-2 at PRL Park.

“I’m so blessed in the people that are around me – there’s eight coaches here that work so hard both on and off the pitch in terms of their video analysis work, preparing sessions, player id.

“Our coaches were at an under-12 Premier Galway girls’ game this morning before playing a National League Final. We really want to push this club on and it’s going in the right direction with the players we have.

“My role is to push these girls on to the highest level they can be, and I believe we’re successful in that.

“Most people will look at the trophies and that is a token as we do want silverware at our club so we hope now these girls have won it at under-17 and they’ve won it at under-19 and will now go and win it at senior and I think that all the platforms withing the club and the structures are there to allow them to do that.”