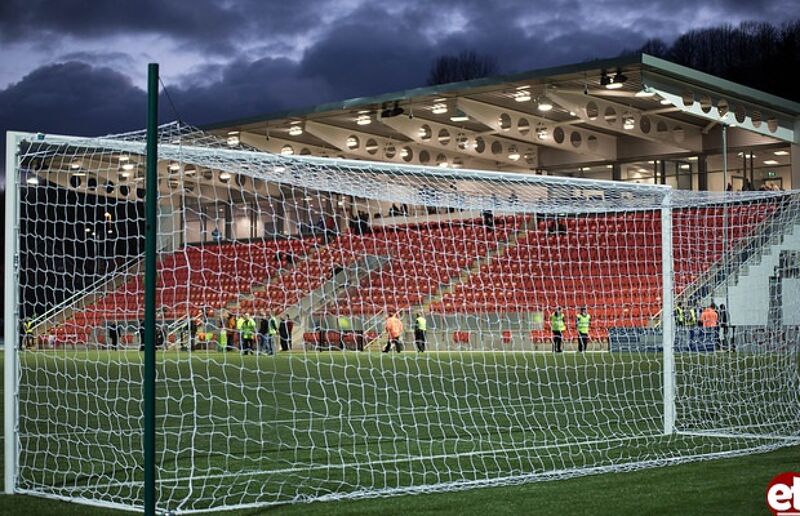 The Ryan McBride Brandywell will host the final of the Under-19 Cup Credit: John-Paul McGinley (ETPhotos)

Derry City welcome Bohemians to the Ryan McBride Brandywell Stadium on Wednesday evening (kick-off 7:45pm) for the final of the Enda McGuill Cup.

Path to the Final – Derry City

After a bye in the First Round, Derry City recorded a 2-0 win over local rivals Finn Harps thanks to two goals from Evan McLaughlin.

The Quarter-Finals was a much tighter affair for the Candystripes where they eventually got the better of Shamrock Rovers via a 4-2 win in a penalty shoot-out after drawing 1-1 after extra-time.

Derry left it as late as possible in the semi-final against Treaty United with Michael Harris netting a 90th minute winner to put the Candystripes into the final.

Path to the Final – Bohemians

Bohemians also started with a bye before recording a 3-0 win over Dundalk in the Second Round. The Gypsies progressed to the Semi-Finals thanks to a 3-1 win over Bray Wanderers thanks to goals from Billy Vance, Colin Conroy and Aaron Doran.

Bohemians faced Cork City in the Semi-Final and, like Derry City, required a single goal to progress. Aaron Doran’s 13th minute goal was enough to see Bohs progress to the Cup Final.

Derry City Under-19 manager Gerard Boyle is delighted with his sides’ season to date and is hoping their can cap off the season with a Cup Final win. He also praised the benefit of a number of his squad getting first team experience over the season.

"It's been an excellent season, we've only had two defeats, one draw and won every other game. It would be great to cap off the season with some silverware," said Boyle.

"We've had plenty of our players gain that experience in the first-team which has stood them in good stead. They've coped really well with the different pressures of training and playing with the first-team, and it will probably help them in the match situation on Wednesday night.

"It is going to be a tense affair, as finals often are but we're sure we'll get a good crowd on Wednesday night. We saw a few weeks ago with the senior team at the Pats that a good crowd can really help a team get over the line.

"We're sure that if we can get some fans into the ground, we'll get that extra five or 10 percent which could make all the difference in what is going to be a difficult final against a very good side."

Bohemians Under-19 manager Craig Sexton is fully aware how difficult a challenge facing Derry City at the Brandywell will be but he is confident his side will be more than ready to deal with that pressure and it should be an occasion his players should enjoy.

"It has been a challenging year for the players but their application to the challenge has been brilliant and they've got their just rewards in getting to the final against a difficult Derry side," said Sexton.

"We don't see cup finals as the most important thing in terms of developing players, but it is a great day out for the players and the club who've worked incredibly hard over the past season.

"We've gone to challenging venues before, in terms of Shamrock Rovers in Tallaght Stadium in the final, but now it is a different test in terms of the travel to Derry and it is great for the players to experience that different type of pressure as part of their development.

"We're used to travelling to play matches and it won't be a problem, we'll prepare right like we always do and it'll be one we'll look forward to with hopefully a big crowd.

"We've had a number of players get the first-team experience this year. Keith (Long) is very good in terms of what we do in the Academy, looking to promote players and we're very lucky to have that. A lot of boys have got the chance this year with the first-team and that will stand them in good stead tomorrow night and in the future."

When is the game on? How can I watch it?

The match is on Wednesday, October 27th at the Ryan McBride Brandywell Stadium (kick-off 7.45pm). The match will be broadcast live and for free to all viewers on LOITV.

The referee for the game is Michael Connolly with assistants Ciaran O’Reilly and Keenan Deering. Declan Toland is the fourth official.