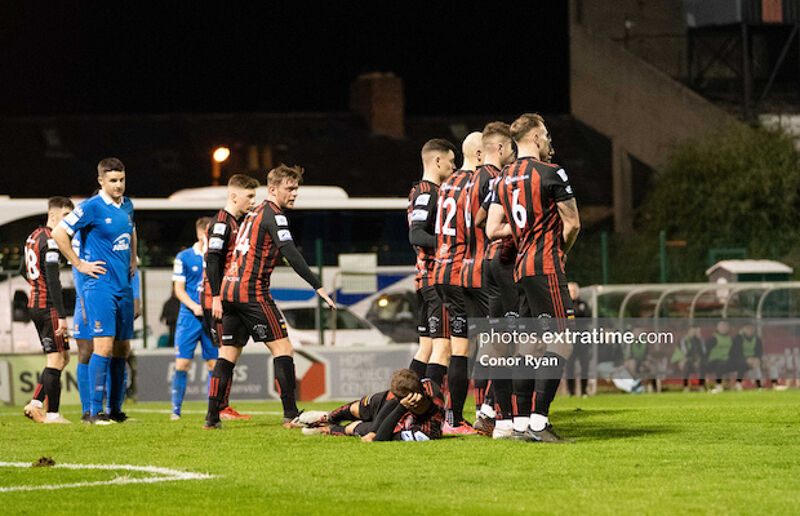 Second half strikes from John Martin and Anthony Wordsworth lifted Waterford out of the relegation zone, as they overcame Bohemians on Monday evening having trailed to a Georgie Kelly first half goal.

The league’s top scorer had opened the scoring just before halftime with his 20th league goal of 2021. Bohemians dominated the first half, with chances from Jamie Mullins, Promise Omochere and Keith Ward.

There was to be no repeat of Friday’s second half performance however, as Keith Long’s side lost their way after Martin’s equaliser. Wordsworth’s goal after the hour mark proved to be the winner. Roland Idowu and Ward went close afterwards, but the visitors defended strongly and left Phibsboro with three precious points.

The Gypsies came into Monday’s game in fifth place, having won one of their previous five league games. Many Bohs fans arrived at Dalymount still on cloud nine after Friday’s dramatic cup semi-final win.

Kelly’s 89th minute strike proved to be the winner against nine-man Waterford, as the Gypsies reached their first final since 2008. Keith Long opted to make seven changes to his side after the semi-final. James Talbot, Ciaran Kelly, Dawson Devoy and Kelly were the only players retained, as Ireland under-17 international James McManus was called up to the first team and named on the bench.

Waterford arrived in Dublin 7 in ninth place, two points behind Finn Harps and three behind Dundalk, who were facing St. Patrick’s Athletic the same evening. Paul Martin replaced the suspended Brian Murphy, as Niall O’Keefe and Kyle Ferguson also missed out through suspension. Marc Bircham’s side won the last time the sides met in the league, as a Pheonix Patterson goal earned three points in August.

Both sides began the game with vigour. Junior Quintirna had the first chance of the evening, but his effort proved no trouble for Talbot.

Last Friday’s cup hero Kelly was inches away from an opener, but his curling effort went just wide of Paul Martin’s goal on the quarter hour mark.

After struggling to hold the ball in the opening stages, the visitors settled into the contest after the 20 minutes. Junior and Patterson sent two free kicks straight into the wall, while Antohny Wordsworth and John Martin looked dangerous threats also. Kelly and Ward each went one-on-one with Martin, but the linesman's flag put a stop to both moves.

The opener arrived minutes before half-time through the electric Kelly. A beautiful through ball by Dawson Devoy found Kelly, who rounded the oncoming Martin to tap in and put his side ahead. It was no more than the hosts deserved after a dominant first half performance.

After an impressive first half. Bohs began the second in disastrous fashion. The visitors equalised three minutes after the restart through Martin. Talbot’s incredible double save from Wordsworth and Patterson wasn't enough to keep the ball out, as John Martin pounced to tap in for his eight goal of 2021. John Martin should've had his second of the night minutes later but skied his effort over the bar from close range.

Omochere headed just wide of Paul Martin’s goal, before things went from bad to worse for Bohs after the hour mark. Quintirna found Patterson down the left wing, who cut inside and squared to Wordsworth for the 32-year-old to fire past Talbot. Bohs could have no complaints after looking devoid of any composure and organisation in the second half.

Ward went close for the Gypsies before he was substituted, as Ireland under-21 teammates Ali Coote and Ross Tierney were introduced. Coote found Idowu, who shot just wide in what was the last chance of the contest.

Waterford saw out the win though, and with it gained three precious points. With Dundalk having lost 1-0 at Richmond Park at the same time, Waterford climbed to eighth place and are now level with Dundalk with a game in hand (albeit a worse goal difference).

The Gypsies travel north to face Derry City next Friday, with both sides fighting for a European spot, while Marc Bircham’s side go to Dundalk, in an absolutely crucial game in the relegation battle.