Another boost for Women's National Team as they partner with Cadbury 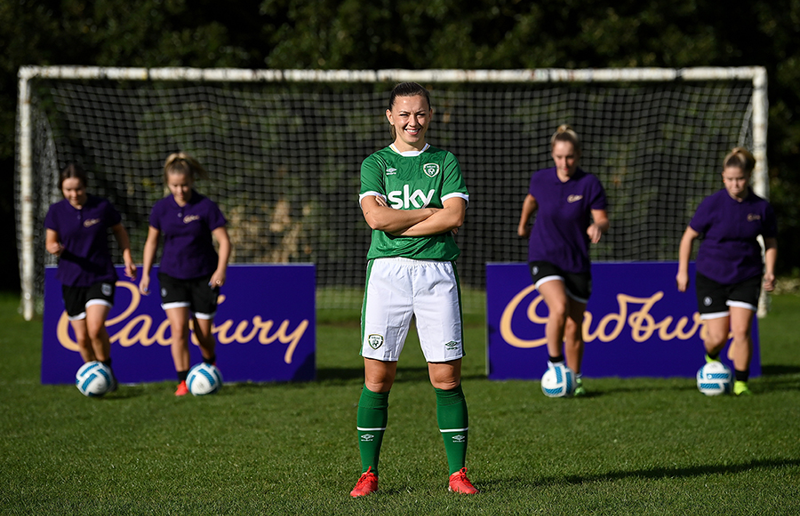 Katie McCabe at the announcement of Cadburys as a sponsor of the Women's National Team Credit:

After landing Sky as the first-ever, stand-alone primary partner for the Republic of Ireland Women’s National Team, the FAI have announced that Cadbury is to be an official partner.

It is more positive news around the team following previous announcements on establishing equal pay for both Men’s and Women’s squads.

The partnership will see Cadbury take an active role in supporting the FAI’s strategy to continue to raise awareness and grow the women’s game in Ireland through acts of generosity, synonymous with the brand. Cadbury, whose Irish manufacturing operation is based in Coolock, will seek to support women’s football at a grassroots level by enhancing club facilities while raising the profile of women’s players in Ireland.

Talking at the announcement on Monday, Managing Director of Mondelez Ireland, Eoin Kellett, said: “At Cadbury, we are delighted to announce our partnership with the Republic of Ireland Women’s National Team. We’ve seen the team go from strength to strength in recent years and are looking forward to supporting them as they aim to reach the World Cup in 2023 and beyond.

"We believe this partnership also bestows a responsibility upon us to help in growing the women’s game – a challenge we look forward to supporting the FAI in taking on.”

FAI CEO Jonathan Hill re-iterated the belief that this will help push women’s football at all level.

“Cadbury is a world-renowned brand who will bring a huge amount to this partnership to help us continue to move forward as we aim to affect women’s football from all levels – Grassroots all the way up to the Republic of Ireland Women’s National Team. It is exciting to launch this partnership ahead of our 2023 FIFA Women’s World Cup qualifying campaign and we look forward to working closely with Cadbury,” Hill said speaking at the announcement.

The Republic of Ireland Women’s National Team welcome Sweden to Tallaght Stadium on 21st October in their first 2023 FIFA Women’s World Cup qualifier before travelling to take on Finland on Tuesday 26th October.