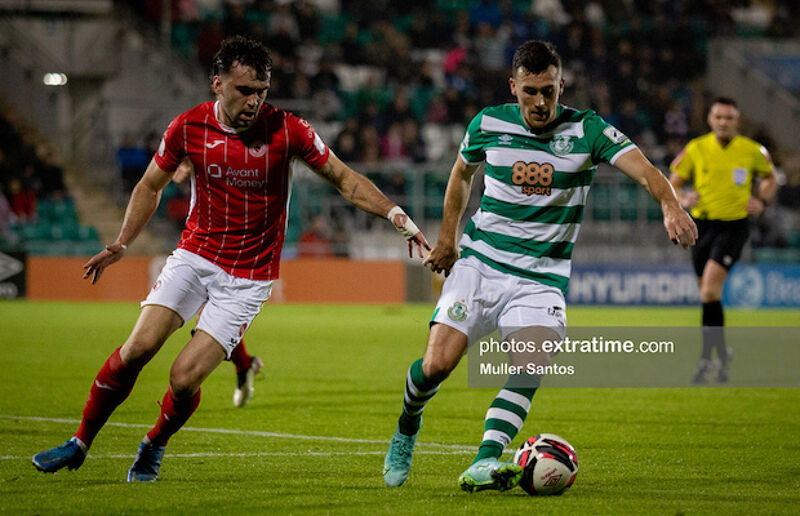 The Tallaght man began his League of Ireland career as a 19-year-old with Galway United and has spent time playing with Bohemians, Sligo (twice), St. Patrick’s Athletic, Limerick and Bray but his longest time with any club has been his current very succesful spell with Shamrock Rovers.

He first joined the club in 2012 in a season that nobody looks back on too fondly. Under the management of Stephen Kenny, the 2012 squad failed to live up to expectations brought by back-to-back league titles and group stage qualification in the Europa League under Michael O’Neill.

Hoops fans were quick to the notice that a number of former Bohemians players in the Rovers squad including Killian Brennan, Conor Powell and Aaron Greene weren’t able to replicate their performances for the Gypsies in Tallaght.

When Stephen Bradley brought Greene back to the club in 2018, it is fair to say there were plenty of doubters amongst the fanbase.

However, across the last four seasons, Greene has provided goals (25 in 109 league appearances including being top scorer with 15 in all competitions in 2019), versatility (deployed at left wing back during Rovers’ recent injury crisis) and a commitment level to the team that never drops below 100%.

Speaking previously to this reporter for the Shamrock Rovers match programme Greene noted that he was “loving playing centre forward for a club who plays where I’m from. For it to come around a second time, you have to grab it. The first time I was here, I was very young and this time I’m a bit older and my son is playing here at the club’s academy. It means that a little bit more.”

Man of the match

Greene was named man of the match on Friday by his former 2012 Rovers teammate Graham Gartland who was on LOITV co-comms duty and Greene spoke with this reporter after the final whistle as part of the coverage.

Just prior to the interview Greene gathered the Rovers under-9s team on the pitch so they could get a photo together and when he spoke the striker was delighted with the victory over Sligo Rovers.

The visitors had won 1-0 on their last visit to Tallaght Stadium back in May. That was the first win for the Bit O’ Red since October 2013 (when Greene scored for Sligo in the 2-1 win) and it sent them top of the table at the expense of the Hoops.

It was all change by the final whistle on Friday as Shamrock Rovers moved 12 points clear of second placed St. Patrick’s Athelict (and 19 clear of Sligo).

“Delighted to get the win and a clean sheet,” said Greene. “Biggest one for us is that we didn't want one team coming here beating us twice in Tallaght. They came up and won here during the season and they kind of rubbed it in our faces. They walked away like they had won the league so we showed them today.”

Greene seems to enjoy celebrating goals against his former clubs. When he scored the third goal for the Hoops in a 3-2 win in Sligo just prior to the lockdown last March, he celebrated eating a couple of chips from the snack box that had been thrown at him by a home supporter in the Showgrounds.

Greene celebrated his goal and Rovers 2019 FAI Cup semi-final win over Bohs by draping his shirt over the corner flag in Dalymount Park and he comes up against his former club on Monday night.

The 2021 Hoops team like 2012 has a spine of ex-Bohs players but Rovers supporters are very pleased with how those players are performing for the Hoops (Greene, Pico Lopes, Dylan Watts and Danny Mandroiu).

Rovers need just seven more points from their remaining six games to retain the title but unsurprisingly Greene is only focused on Monday’s match.

“I'm not just saying it, the manager would kill us if we say anything else. We don't look passed Monday as this league is quick enough to turn around and bite you in the back. Nothing gets handed to you. We know we need to go and grab it.”

Rovers come into the game with nine wins from their last 11 league games and put in a fairly dominate display against Sligo Rovers to bounce back from a 1-0 loss in Dundalk the previous week.

They go into Monday’s match 23 points clear of Bohs who sit in fifth place but who knocked Rovers out of the cup en-route to their FAI Cup semi-final next Friday.

“It was massive that we bounce back from last week. We were bitterly disappointed in the Dundalk game. The manager set out how we wanted to press (against Sligo). We knew we would get chances.

"With Danny's goal it was a great finish and for my goal, me and Danny linked up again. All of us in there don't care who scores and clean sheets win you leagues and we are just delighted about that.”

The Hoops hit the frame of the goal four times during the game with Dylan Watts’ set piece delivery causing Sligo all sorts of difficulty.

“We are a real threat from set pieces with Dylan Watts. He is someone just as good as Jack Byrne to be honest on dead balls.”

Stephen Bradley: ‘Ten goals from midfield and he still can't win player of the month but he has been fantastic’ https://t.co/i4H7Ex2fl8 pic.twitter.com/7f1KlTeVmH