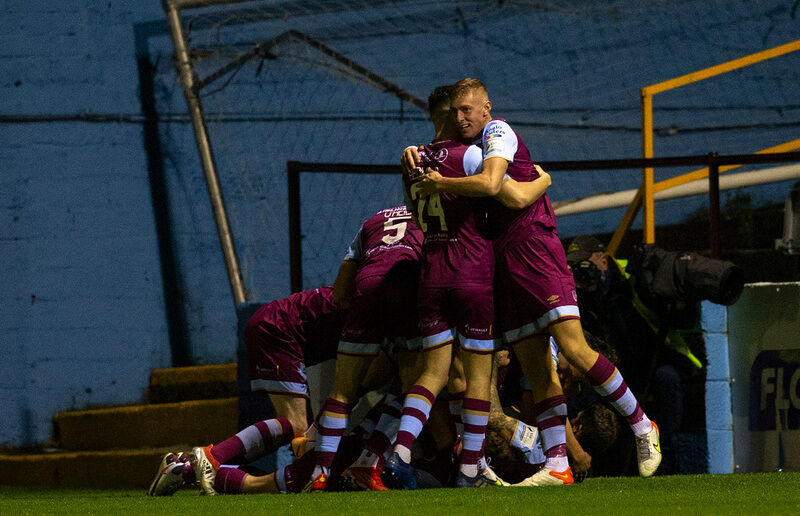 Darragh Mackey of Drogheda celebrates his goal with teammates during the SSE Airtricity League Premier Division match between Drogheda United and Longford Town at Head In The Game Park, Drogheda on 15 October 2021. Credit: Ben Whitley (ETPhotos)

After two defeats in a row Drogs had slipped down the table and were hovering above the play-off spot. This win moves to four points clear of 9th place Waterford with six huge games to play.

For Town, it had been a matter of when not if, they were going to get relegated. Just two wins this season, so far, (both at home) and 20 defeats. Their problem at both ends of the field was evident on Friday night; their goal difference is -37. 19 worse off than Waterford.

Town started brightly and in the third minute a free from Dean Byrne was punched away by Drogheda keeper David Odumosu. Shane Elworthy’s delivery from crosses caused problems but nothing to really trouble the home side.

Drogheda had started sluggishly and took a while to get into the game. James Brown and Conor Kane on both wings started to cause problems. Kane was taken down by Elworthy on 26 minutes; Gary Deegan played the free short to Darragh Markey but he wasted a good chance.

On 28 minutes Mark Doyle’s shot came off the post and came out to Brown but he should’ve done better with his effort. On 32 minutes Steacy was forced into making an excellent save by Doyle as the home side piled on the pressure. From a corner on 37 minutes Dane Massey blasted the ball over the bar.

Seven minutes into the second half and the home side broke the deadlock; a shot from Mark Doyle wasn’t gathered properly by Steacy and it fell to Darragh Markey, he found the back of the net from a tight angle.

The home side doubled their advantage on 66 minutes; after his initial cross was blocked, Markey found the head of Doyle with his second attempt, and he headed home from close range.

Town couldn’t muster up anything in terms of chances to test Odumosu as he kept his goal intact. With Drogheda well on top and Town knowing their fate was sealed the game played at a pedestrian pace in the final 10 minutes. Right at the end a free from substitute James Clarke met the head of Killian Phillips but his effort was saved by Steacy.