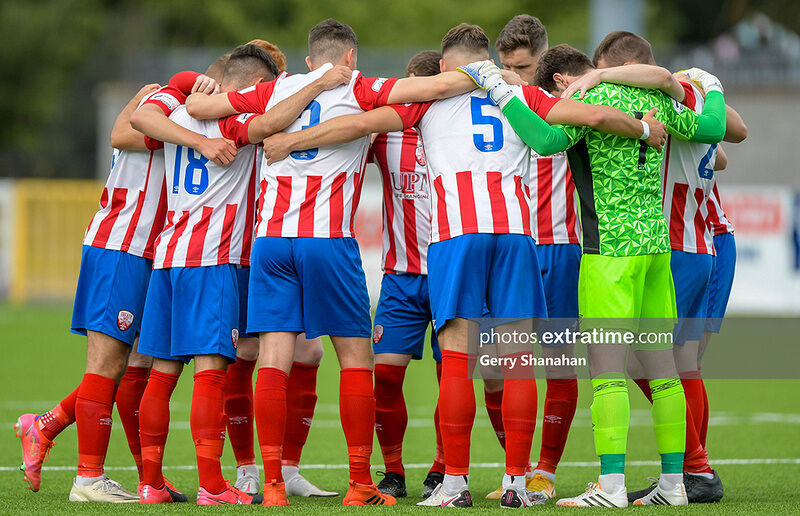 Treaty United maintained their spot in the play-offs despite being held to a scoreless draw with Cork City on Friday night, defeats for rivals elsewhere strengthens their position as the season comes to a close.

Cork City will be cursing yet more dropped points as they failed to make ground in their chase. They had plenty of the ball but failed to make the necessary breakthrough.

Treaty United were missing the suspended Mark Ludden after his sending off against Galway United with Joe Collins taking his place.

Callum McNamara also replaced Sean McSweeney who had been carrying a knock while Cork were able to welcome back the suspended duo of Gordon Walker and Cian Coleman, both had missed the loss to Shelbourne.

It was a brisk start from the away side who were roared on by a decent travelling support. Dylan McGlade cut in from the flank to unleash a shot which was parried by Tadhg Ryan. He was able to gather the follow-up before Barry Coffey was able to tap home.

Treaty seemed to be content to allow City have the ball and play on the break.

Stephen Christopher fashioned a chance for the Limerick side, but Cian Coleman was able to snuff out the danger.

He caused problems moments later with a deflected shot. It seemed to be going wide and almost caught out Mark McNulty.

McGlade had two efforts, but neither was able to properly test Ryan as he was finding a willing opponent in the guise of Charlie Fleming.

It was a stop-start game for much of the half with plenty of stoppages and loose passes. The slippery nature of the pitch was doing little for any build-up.

Cork City almost took the lead after a sustained period of possession. The ball was cleared from a free kick before Gordon Walker chipped it towards the back post.

Ryan was forced to smother an effort from Cian Murphy and the follow-up from Barry Coffey. Cian Bargary had a chance pushed aside as the away side tried to go into the break in front but to no avail.

City seemed to go more direct at the start of the second half and the pace of McGlade and Murphy was key to this.

One quick kick-out by McNulty almost set Bargary free before Mark Walsh came in with a firm challenge.

Ryan then had to keep out efforts from McGlade and Bargary in quick succession.

Treaty were holding firm and almost took the lead fro a corner-kick.

The corner was whipped in after a breakout which caused panic in the penalty area. It was cleared off the line before Fleming headed just over.

At the other end, Gordon Walker drove forward in the Treaty half. He laid it off to McGlade who skipped past his man before having a shot, Ryan was again to the rescue.

The game was becoming very stretched as both sides attempted to land the goal which would aid their cause.

Each manager introduced a number of subs to land that all important winner. The pressure was beginning to tell as neither wanted to yield ground. It perhaps did not make for the greatest of fares but kept the excitement factor high.

Treaty almost hit the front with minutes to go. William Armshaw found fellow sub, Sean McSweeney, with a precise run and cross. Treaty’s top-scorer was only able to head wide under pressure.

Late pressure from a corner by City almost landed the crucial goal at the end, but to no avail.

Frustration was evident at the very end as both sides tussled after the final whistle. Thankfully it was dealt with quickly and effectively by the officials.

It seems beyond Cork now to reach the play-offs, but will aim to keep the dream alive with a home game against Bray next Friday. Treaty will take on Shelbourne at Tolka Park on the same night.