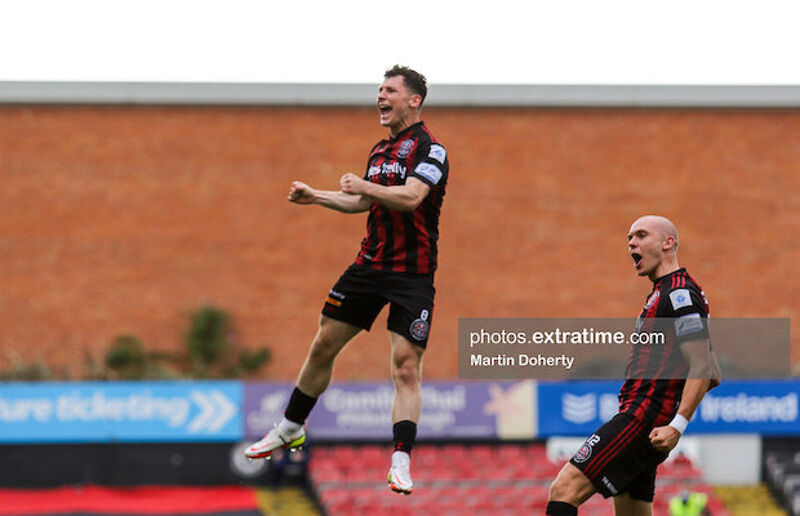 Ali Coote celebrating his goal against Shamrock Rovers in the second round of the FAI Cup Credit: Martin Doherty (ETPhotos)

Bohs have been one of the form teams of 2021, with an exciting run in the Europa Conference League, being in contention for a top four position in the league and overcoming arch rivals Shamrock Rovers to book a quarter final slot in the Extra.ie FAI Cup.

Their European adventure is well and truly over at this stage, it’s highly unlikely they will make up the 13-point gap between themselves and the league leaders Shamrock Rovers for the league title so the FAI Cup is probably their best chance of silverware this year.

The Gypsies had a relatively easy passage in the first round of the cup, overcoming Munster Senior League team College Corinthians 5-0 in Turner’s Cross at the end of July.

Their next tie was a much tougher encounter against Shamrock Rovers but they came away with a 2-1 victory courtesy of goals from Ali Coote in the 55th minute and an 87th minute winner from Andy Lyons.

In a dramatic end to that game, Roberto Lopes had equalised for Rovers in the 78th minute, Georgie Kelly (Bohs) and Ronan Finn (Rovers) were both red carded two minutes later and with only three minutes left on the clock Lyons beat Rover’s keeper Alan Mannus from the edge of the box for the winner.

Since that Rovers match, Keith Long’s side were at the wrong end of a 3-2 score line away to Drogheda United but they ground out a good 2-1 win away to Finn Harps last weekend, a result that sets them up nicely for their FAI Cup quarter final this Friday night.

Maynooth University Town have been the surprise package of this year’s FAI Cup competition, being the only non-league side to make it all the way to the quarter final stage.

While they have won their last two league games, their form at the start of the league was poor, losing their first four matches leaving them on six points after six games. They currently occupy sixth place in the ten team league, 12 points behind the unbeaten Drogheda team who are on 18 points.

They seem to have reserved their best form for the FAI Cup as they had a convincing 4-0 win over fellow LSL side Malahide United in the first round before causing a major shock when ousting First Division side Cobh Ramblers 3-2 at the end of August.

They took advantage of a John Kavanagh own goal in the 18th minute of the Cobh match to get off to the best possible start but even though the Cork team scored twice through Conor Drinan and Jason Abbot, Town responded with goals from Jack O Connor and the 87th minute winner from Jackson Ryan.

Speaking to the media during the week, Maynooth manager Shane Harte said “My team are excited, very excited. We all would’ve watch Bohs’ adventures in Europe the last couple of months and we never thought we’d be playing them in the quarters of the Extra.ie FAI Cup.

“For the young lads who have never played League of Ireland football, it’s a chance for them to show what they can do. They know the challenge that lies ahead of them, we’re under no illusion about that, but they’re really excited and looking forward to it.’

Harte went on to say “We deserve to be there at the moment. This is no fluke — this didn’t happen overnight - it’s been building over the last couple of years.”

Taking on the Keith Long’s team will be a serious ask for an amateur side but given Bohs’ busy schedule in the coming weeks, there could be a chance that Maynooth can cause another giant killing act as they did to Cobh.

“I don’t know how serious they are taking our threat,” the 41-year-old added. “We were the team that everyone wanted to get in the quarter-final, let’s be honest about it. We’re the lowest ranked team left.

“Bohs have four league games to catch up on, the cup might not be of significant importance now because of who they were drawn against. I don’t think they will disrespect us. I know Trevor [Croly], I played with him — Keith Long as well. They won’t disrespect us but they may underestimate us.”

Bohemians have won the FAI Cup on seven occasions in its history, with their first victory coming against Drumcondra back in the 1927/28 season.

Their most recent success was in 2008 when they beat Derry City. The game was 2-2 at the end of extra-time and the Pat Fenlon managed Bohs team won 4-2 on penalties - the first ever FAI Cup Final to be decided on penalties.

Maynooth University Town’s only Cup success was in the FAI Intermediate Cup which they won in the 2017/18 season, defeating Firhouse Clover FC by 4-1 at the Aviva Stadium.

Harte realistic about Bohs tie but it's not a day out for Maynooth https://t.co/KuEPk48BYa pic.twitter.com/xDbCSc4oEd