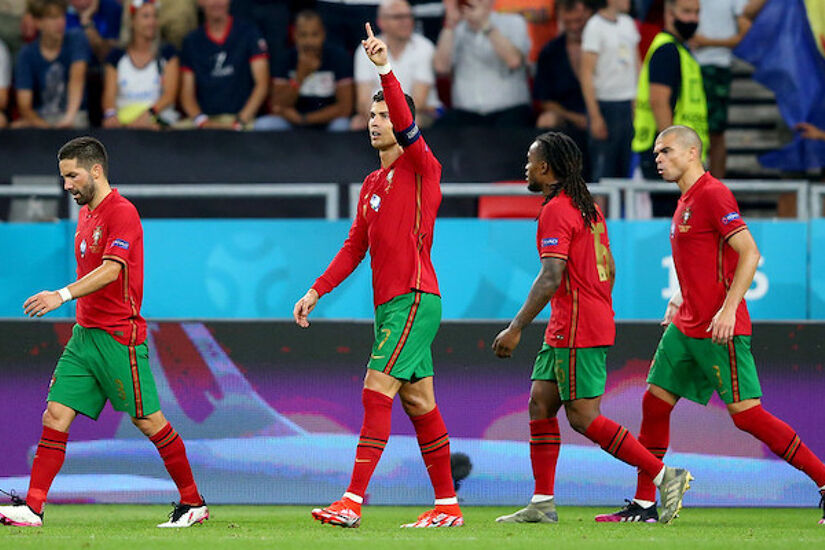 Portugal are clear favourites for Wednesday’s game against Ireland in Faro (kick-off 7.45pm). Fernando Santos’ side is littered with international stars who have won numerous league titles, domestic cups, and Champions Leagues titles.

All eyes will be on Cristiano Ronaldo following his dramatic move back to Manchester United last weekend. He will captain the side and was crucial in their Euro 2016 and 2019 Nations League triumphs, as well as scoring five goals in four games at this year’s Euros.

The Manchester United forward can also make history on Wednesday, as he is currently one goal away from becoming the highest all-time goal scorer in men’s international football.

Ronaldo and Iran’s Ali Daei are both tied on 109 goals. Ronaldo also featured the last time the two sides met, with Portugal winning 5-1 in a 2014 friendly. In thirteen past meetings Portugal have won seven and drawn two.

This Portugal side is far from a one man show, however. Bruno Fernandes, Diego Jota, Bernardo Silva are all deadly goalscoring threats, while Ireland’s forward line will have to battle with Premier League player of the year Ruben Dias, and three-time Champions League winner among others.

The Estadio Algarve will be a quarter full for the match, with 7,865 home fans allowed to attend. FIFA announced that no away fans are allowed into the stadium, although many Ireland supporters have made the trip over.

Portugal are currently top of Group A, level with Serbia on seven points. Last March, A Seleção beat Azerbaijan 1-0 and drew 2-2 with Serbia before overcoming Luxembourg 3-1 to leave them top of the group ahead of the visit of Ireland.

In Euro 2020, a brace by Ronaldo ensured they beat Hungary in the opening game. A 4-2 loss to Germany was followed by another double by Ronaldo as they drew 2-2 with France. They failed to retain their European Championship title however, exiting the tournament at the last 16 stage losing 1-0 to Belgium.

Head coach Fernando Santos spoke to the media ahead of the World Cup Qualifier, referencing Ireland’s attacking threat while appearing to think that they are a “British team”.

“We know the characteristics of these British teams, for them the game never ends in any circumstances,” said Santos. “They always give everything.

“We thought only about this game versus Ireland, we have to be strong, it would be bad if we only focused on these aspects (Ronaldo’s record)”.

“Ireland played two very strong games versus Hungary and Serbia. It is not a team that only plays in defensive action, the forwards are also in a position to come out on the counterattack. It takes speed to dismantle this team, if we do it well and we are focused and organised I believe Portugal will win.”

Wednesday’s World Cup Qualifier will be Stephen Kenny’s toughest test yet, but it’s a game he and his players are relishing. Ireland come into the game with just one win in 13 games, after Troy Parrott’s brace helped Ireland overcome Andorra 4-1 last June.

World Cup qualification at this stage might be a step too far for this young side, however Ireland’s supporters will be hoping to see much improved all-round performances from the disastrous qualifiers last March.

Stephen Kenny named a 25-man squad last week, with some notable absentees. Darren Randolph who is currently third choice at West Ham United was not selected, while Robbie Brady, James McCarthy and Ciaran Clark all missed out.

Callum Robinson will miss the game due to testing positive for Covid-19, while Alan Browne is self-isolating as a close contact. Kenny said he is considering the possibility that the two could return for the two home games to follow.

Burnley's Nathan Collins earned his first senior call up, while Jamie McGrath and Andrew Omobamidele kept their places in the squad. Bohemians goalkeeper James Talbot, fresh from his team’s 2-1 FAI Cup Dublin Derby win over Shamrock Rovers, was called up to replace the injured Mark Travers, while former Hoop Gavin Bazunu and current Liverpool player Caoimhin Kelleher will contest the number one shirt.

Three qualifiers in just six days will be a challenge for this Ireland side. However, if they return from Faro relatively unharmed, and put on two good performances in front of a half-capacity Aviva stadium, the mood around the national team could swing in an instant.

That said, this Ireland team have the opportunity to go out and compete with the world’s best on Wednesday. Memories of beating England in ‘88, Italy in 1994 and more recently Germany in 2015 to name a few can give Ireland confidence.

Stephen Kenny spoke to the media on Tuesday and said while Portugal do carry a huge attacking threat, his Ireland side won't be sitting back or shutting up shop.

“Ronaldo has been an outstanding talent for two decades,” said Kenny. “They have a lot of good players but from our point of view it’s a great game for us, an important World Cup Qualifier.

“Our players have a lot of potential. We’ve given 11 players their competitive international debuts, we’re building our team and looking to see even more progress this week. We had a good June window and want to carry that into tomorrow's game

“Portugal are the Nations League holders and Euro 2016 champions. They are a very strong team but we’re really focusing on ourselves. We've done our homework and know their strengths, and we want to put on a spring performance here tomorrow night.

Captain Seamus Coleman also chatted to the media on Tuesday and spoke of the importance of assisting the younger players in the squad.

“I was a younger player before, and you look to the senior players for standards and the pride in the shirt,” said Coleman.

“It's important we give that example and that the young lads learn from us as much as they can. We’re quite happy with how we are as a group. We've always been together as a unit and that will continue ”

“We have to focus on what our plan is for tomorrow and how to stop their players. It's going to be tough. Ronaldo is one of the best players to ever play the game. We’re looking forward to getting out there and playing against him.”

The team’s have only played each other in competitive action on four occasions. In the 2002 World Cup qualifiers, both games ended in 1-1 draws. In qualification for EURO96 Portugal beat Ireland 3-0 in Lisbon, losing 1-0 in Dublin.

The Slovenian referee Matej Jug took charge of St. Patrick’s Athletic 1-0 win in Malta against Valetta in the 2009 Europa League second round qualifier.