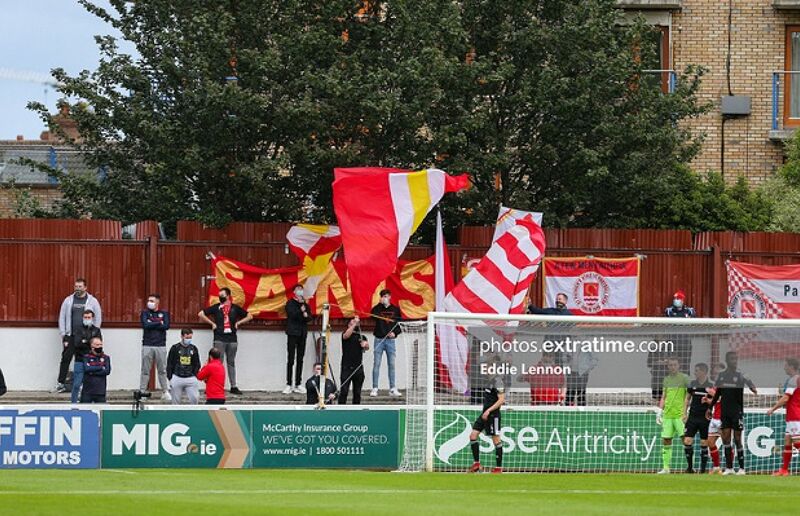 Waterford eventually saw off Athlone Town in the FAI Cup on penalty kicks in what may be one of the best cup ties in recent memory.

A hat-trick, including a long-range screamer, from new Athlone Town recruit Glen McAuley was not enough as the Co. Westmeath side lost on penalties.

Absolutely incredible goal by Glen McAuley to score his hat trick and equalise for Athlone Town, the game goes to penalties @AthloneTownAFC 4-4 @WaterfordFCie

They did in fact fall 2-0 behind in normal time before taking what looked to be a winniead 3-2 lead before injury time,

But new Waterford recruit Greg Halford levelled matters before George Forrest then gave the Blues the lead in the 122nd minute of the game.

McAuley would then, however, put his name up in lights scoring with the next touch of the game to bring the game to penalties where it was not to be for Athlone who crashed out of the competition at home.

A brace from Billy King set the tone for an imperious Athletic who also saw Academy youngster Ben McCormack set his first senior goal for the club.

Paddy Barrett, Jay McClelland and Sam Bone also netted for the Saints on a dismal night for Gary Cronin’s side in Inchicore.

Shamrock Rovers also got their FAI Cup campaign off to a winning start with a 2-0 win over Galway United, whereas Cabinteely’s slide continued with a 3-0 loss away to a resurgent Wexford.

A commanding UCD also raced past a sluggish Shelbourne thanks to a 2-0 win, with Harvey O’Brien heading home an emphatic effort to seal the deal.

Elsewhere. St Kevin’s Boys journey in the competition came to a close following a 4-1 loss at home to Kilnamanagh.

Former League of Ireland winger Dean Clarke scored twice while Gary McCabe also got in on the act as Kevin’s adventure reached its conclusion.

Thats it full time here in St Aidans its the away side who go through to the next round with a 4-1 https://t.co/AMZsmsd5gp of luck in the next round guys @Kilnamanagh_AFC @FinalWhistleIE @ExtratimeNews @LSLLeague pic.twitter.com/GtEExl4Igo