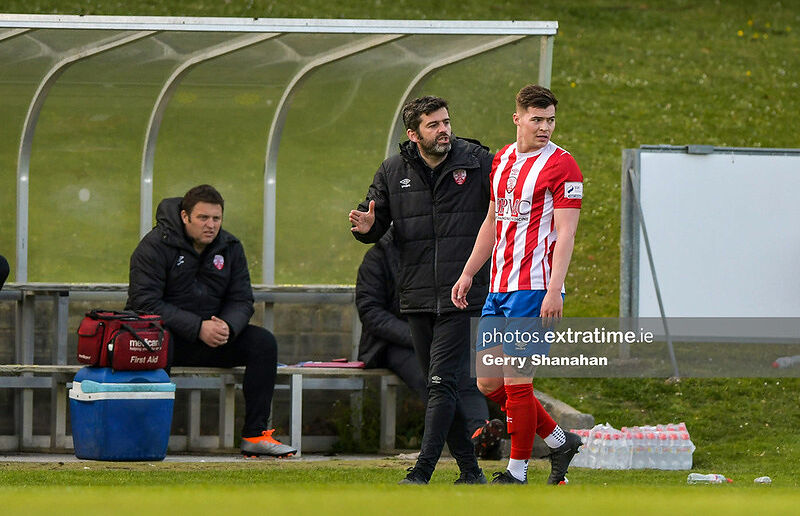 A tooth and nail performance by Treaty United on Saturday night earned the Shannonsiders a 2-0 away win against in-form Cobh Ramblers at St Colman’s Park.

The result, which was the club’s second away win in the 2021 First Division season, moved Treaty up to second in the table, eight points off league leaders Shelbourne.

The victory also gave further Munster Derby bragging rights to the Limerick based club, as they beat Cork City 2-1 at the Market Fields last April.

“I’m delighted because Cobh is always such a difficult place to go,” said Treaty boss Tommy Barrett moments after the final whistle on Saturday night.

“You get nothing easy down here and I thought the lads battled well. It was a real good professional performance.

“I feel like they dominated possession but they didn’t really do anything with it. We definitely created more chances in the game. We were more effective with our possession.”

It was a game which looked like nothing was going Treaty’s way as they were without a shot on target from open play in the first half and they had a penalty saved.

Then, just seconds after the break, a free-kick from Charlie Flemming was deflected in to give the team a 1-0 lead. Mattthew McKevitt doubled Treaty’s lead at the end of the half, with a close range finish into the Liam McMahon Stand.

“At half-time I felt like we needed to take care of the ball better,” he explained.

“We put our foot in a little bit more. Then we got a lucky goal, which started with a good delivery by Charlie. I thought we deserved the luck, as we haven’t gotten too much this year!

“We were delighted to finish the game off with a clean sheet and to not be hanging on down here.”

Before finishing up, the Treaty United manager gave his thoughts on the club’s stunning 2021 season, which has seen them as one of the contenders for promotion to the Premier Division.

“The start to the season is probably something we would have not imagined,” Barrett reflected.

“That could easily change. You can easily go from second to seventh or eighth if you lost a couple of games in a row. This division is so tight.

“All we have to worry about is our next game.”