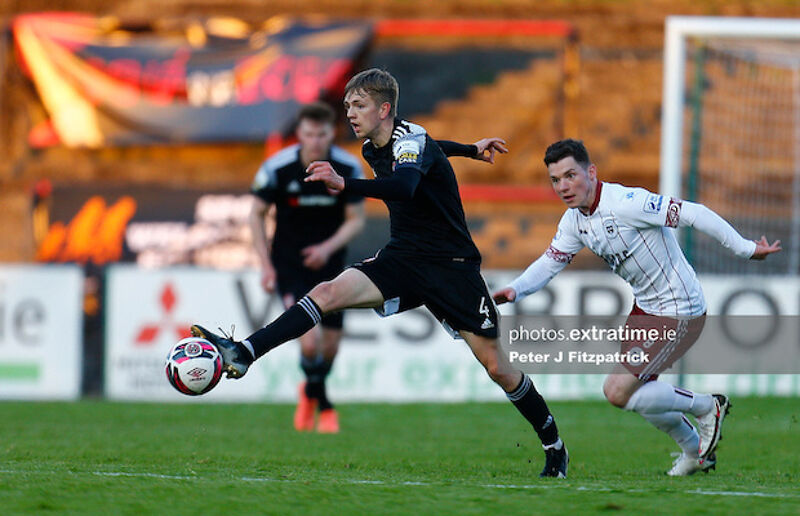 Ciaron Harkin gets on the ball in Dalymount Credit: Peter Fitzpatrick (ETPhotos)

Derry City have confirmed that Ciaron Harkin and Michael Glynn have extended their contracts at the club.

Harkin puts pen to paper on a new two-and-a-half year deal, while Glynn has also signed a similar length deal.

But 19-year-old Glynn has joined Dungannon Swifts on loan as he looks to get first-team football under his belt.

I’m delighted to get Micheal signed up on a long-term deal first and foremost,” said City boss Ruaidhri Higgins.

“He’s a player we think a lot of and going to Dungannon will give him a full season of regular competitive football. He’s only just turned 19 and has time on his side.

“I want him to learn more about his game and this is the right way to do that. I believe he has a bright future at Derry City, and he has the potential to be a big player for us over the coming seasons.”

Harkin however signs a new deal with the club having impressed in recent times for the Foylesiders.

And Higgins is delighted to get his star man tied down to a long-term deal: “Since I’ve walked in the door he has been brilliant.

“You can see him develop week on week, but he is also growing as a leader within the squad.

“He’s a Derry City boy through and through and to have someone of that quality and with that level of commitment it was a no brainer for me and for the club to have him here for at least another two-and-a-half years.”