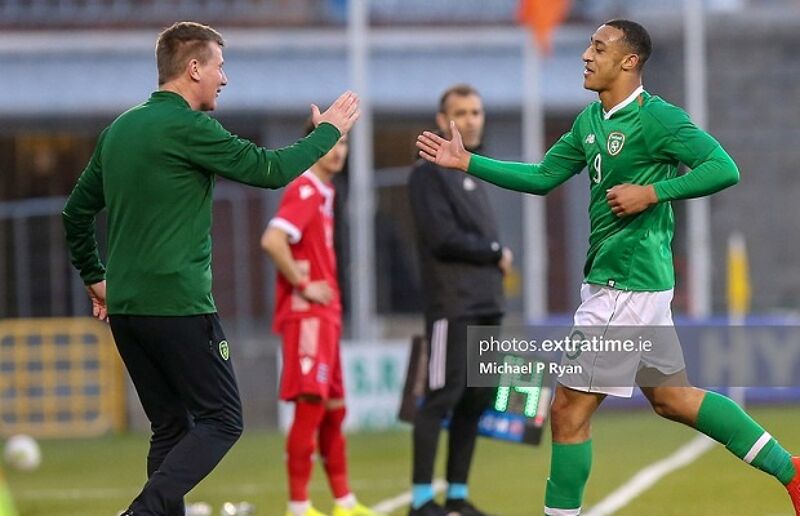 The Boys in Green stood defiant on Tuesday evening as they took the knee to protest racism in front of thousands of booing fans before a friendly against Hungary.

The Republic of Ireland drew 0-0 in Budapest and were left disappointed after their statement for racial equality and solidarity was met with a hostile reception.

Adam Idah, who played nearly the full game, gave a stern response to the heckling after the referee blew for full time: “It’s disappointing to see the fans in the stadium booing us taking the knee.

“It is for a good cause. We’re trying to stop racism. It is a systematic thing in our society.

“The reaction was very disappointing for us. We weren’t expecting that. We wanted to take the knee. It is for a good cause and we want to stop racism,” he added.

Stephen Kenny backed up the striker’s statement following the game in Hungary on Tuesday evening.

“The fact that it was booed is incompressible. It must be damaging for Hungary with the Euros in the country. It does not reflect well on Hungary and Hungarian support.

“I think our players wanted to do it and it is an important stance. I commend them for taking that stance.”

Stephen Kenny’s Republic of Ireland team have repeatedly called for racial equality and for people to stand against racism.

In September 2020 Adam Idah wanted the team to take the knee in Bulgaria before a UEFA Nations League game.

This came at a time when the Bulgarian FA were forced to play internationals behind closed doors due to racist abuse from sections of their own support.

Ireland goalkeeper Darren Randolph gave his full backing to any athlete who takes a stand for the Black Lives Matter movement last autumn.