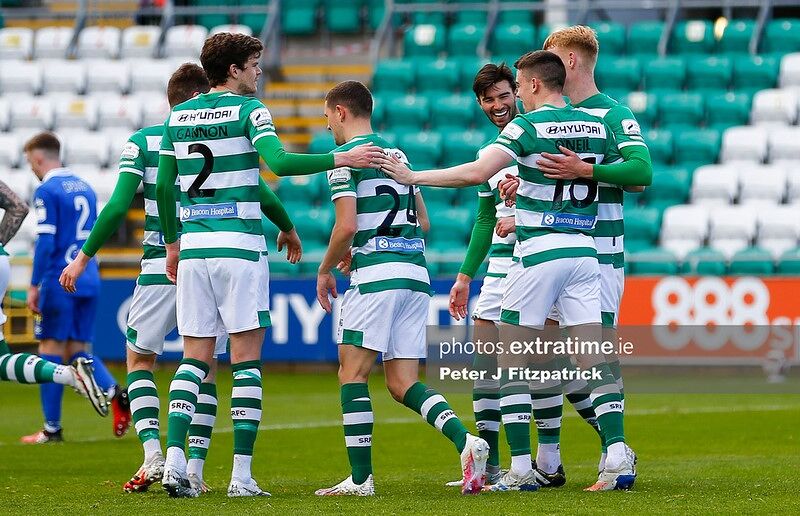 The Hoops went top of the table at Tallaght on Bank Holiday Monday afternoon with ease after a 3-0 win over Waterford. Rory Gaffney got his second goal in four days getting the opener before Gary O’Neill gave the Hoops a well-deserved 2-0 half-time lead with Danny Mandroiu adding a third early in the second half.

Shamrock Rovers called their 2020 team the Invincibles as they went through the complete league campaign unbeaten. It was a shortened season due to the COVID-19 crisis which cut the campaign in half to 18 games.

Only twice before had a side gone through a season without a league defeat; both times they were 18 game campaigns and both times it was a Shamrock Rovers side that managed the feat – in the 1924/25 season and in the 1926/27 season.

It was that second Hoops side that held the all-time record of 30 League of Ireland games unbeaten but the latest Hoops side made history on Monday. This Invincible team set a new bench mark of 31 games unbeaten.

Kevin Sheedy named an unchanged side from their 3-0 loss to Dundalk and stuck with not naming a full complement of substitutes, although this week he did name an extra man so he had four on the bench to call from but the Blues really didn’t bother Alan Mannus much in the match.

James Waite was the one bright spark for the Blues as he looked lively down the right ‘keeping Rovers wing back Max Murphy pegged back.

The opening goal came thanks to a touch from referee Adriano Reale and poor defending  from the Blues. When Lee Grace’s pass hit the ref, Reale gave an uncontested hop ball that Danny Madroiu played in with ease to Gaffney when Waterford should have been more alive to the danger.

Gaffney turned and on the edge of the area rifled a low right foot shot by Paul Martin who continued again in the Blues goal this week.

They doubled their lead just after the half an hour mark although they lost Aaron Greene at the same time. He broke down the left only for a poor challenge from Tunmise Sobowale to stop him. The Blues skipper went in the book and Greene had to go off injured.

Mandroiu rolled Dylan Watts the free kick and when his shot was blocked he had the patience to pick out O’Neill with a low cross for the Kerryman to score – it was Watts’ fifth assist of the season. The Blues woke up a bit after finding themselves 2-0 down and Waite’s shot on 38 minutes only just cleared the Hoops crossbar.

Trailing by two goals at the break, it might have been a good time to bring on fresh legs but with only three outfield players on the bench there wasn’t much options for Sheedy.

The Blues had a big shout for a penalty after a lazy challenge in the box on John Martin when Sean Hoare should have cleared but delayed too long. With the Waterford protests echoing around an empty Tallaght Stadium, the Hoops broke with Murphy cutting inside from the left to tee up Mandroiu to get his third of the season on 54 minutes.

It was his last touch as Stephen Bradley made two changes with this team three goals up.

The disappointment late on for Rovers was the injury to Neil Farrugia who had returned after a lengthy lay off due to injury and he couldn’t complete the game after coming on as a sub.

For Waterford their last Premier Division away league win against Rovers remains November 2005.

They will get one more chance this season to find that illusive away win against the Hoops. If their current form continues though – just six points from the 27 on offer after the first full round of fixtures – it might be some time after that before they get a chance to beat the Hoops in league action.

Rovers’ unbeaten home league record now stretches back to June 2019 and domestically in in competitive action in Tallaght they haven’t lost a home game in 25 – Stephen Bradley’s side truly have earned that Invincible moniker.