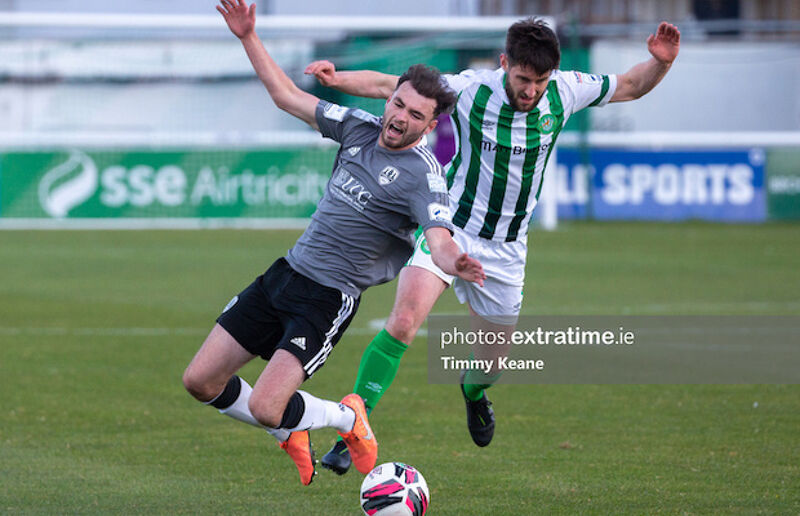 Bray Wanderers winless start to their 2021 First Division campaign continued on Friday evening as they were held to a scoreless draw by a resolute Cork City at the Carlisle Grounds.

In a game that had few chances in the second half, it was Bray who nearly stole a late winner, but Gary Shaw’s dinked effort was cleared off the line by Ronan Hurley in the 93rd minute.

The result leaves both teams outside the playoff positions, as Colin Healy’s new-look Cork City brought an end to their four-game losing run – but stay winless in five, a game less than Bray’s six.

The Seagulls and the Leesiders have endured dismal starts to the season, with both teams just picking up seven points between themselves.

Gary Cronin’s side opted to make two changes from their most recent draw away to Cobh Ramblers, with Dean O’Shea coming in for the injured Dylan Barnett.

Meanwhile, Colin Healy’s confidence-shorn side had five alterations after a dismal loss away to Treaty United last weekend.

It was a quick start to the game however, with both teams going close inside the first five minutes.

Brandon Kavanagh went close for the hosts, but he flashed his shot just wide after his corner-kick broke down on the edge of the penalty area.

But the best chance came for the visitors, as Jack Walsh missed a gilt-edged opportunity after he pounced on a moment of hesitation from the hosts defence.

Cian Bargary held up the ball well to lay off to Walsh, but he could make little of his early chance.

Bray were jolted into life after that near catastrophe, as Kavanagh saw his deflected free-kick crash off the post.

Kavanagh grew into the game even more – and ought to have grabbed an assist – but Joe Doyle’s limp effort was saved by McNulty.

Bray continued to enjoy many of the chances, with Aaron Barry the next to go close as he headed Kavanagh’s free-kick wide at the back-post.

The Shamrock Rovers loanee continued to dominate proceedings, and he linked up well with O’Farrell before unleashing a shot on goal that was parried clear by McNulty as the sides went in level at the break.

While the opening half entertained, the second-half did anything but that. The first notable chance came in the 72nd minute as Walsh headed over Cian Bargary’s cross.

Hit with an injury-hit side prior to kick-off, Cronin’s young guns were handed some sort of a boost just before the hour mark as Gary Shaw got more minutes into his legs after an injury.

Andrew Quinn also impressed for the hosts in defence while the same could be said about City defender Gordon Walker.

Ex-Shelbourne midfielder Mark Byrne had Bray’s first shot on goal with just under 15 minutes of the half to play – but it never troubled McNulty.

The Seagulls continued to press for a late winner, as Gary Shaw first headed wide with a glancing effort from a Byrne cross.

But Shaw’s best chance was to come in the 93rd minute of the game – as he lifted the ball over the dive of Mark McNulty, but Ronan Hurley was on hand to clear the ball away.

The result leaves both teams without a win – as Bray still wait for their first victory of the season, while City arrested a wretched four game losing streak.