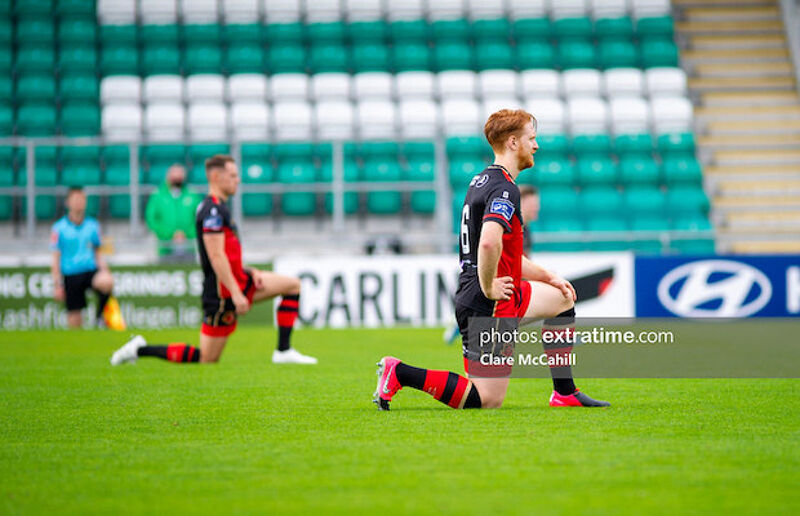 The Boynesiders welcomed defending league champions Shamrock Rovers to Head in the Game Park on Tuesday evening (kick off 7.45pm).

Tim Clancy’s charges are seeking their second home win of the season having debuted their league campaign with a 1-0 win over Waterford and drawing 1-1 with Finn Harps.

Their other points came in a 4-0 away win over Longford Town and in last Friday’s 1-1 draw in Derry earned thanks to a James Brown’s first half goal.

“The lads put in some shift in fairness to them. They created some great chances, defended really well, limited them to no major chances. They scored off the corner which is something we have to be better at.

“Collie [McCabe] was excellent, he came and took crosses, he didn’t really have too many shots to save which is a good thing. Jimmy [James Brown] got a good goal and he had another chance.

“Our performance levels have been of a Premier Division standard. We’ve spoken to the players about this before, we’ve finished every game really really strong, which indicates that our fitness levels are very high,” Doherty said.

“It is a quick turnaround, and then we play Saturday [against Dundalk], three games in nine days, so it’s something we are not overly used to but it’s something we are relishing. It’s why we worked so hard to get promoted. Within the space of a few days, you are playing Derry, Shamrock Rovers and Dundalk, they really whet the appetite, they are games we are delighted to be involved in.

“This is the difference in what we have been doing the last few years, although we had the odd midweek game[in the First Division]. The quality of opposition, particularly given their full time status, Rovers certainly are well able for this. But we don’t use that as any excuse, we are still confident in any game.”

They sit top of the table on goals scored, level on points with St. Patrick’s Athletic and Sligo Rovers thanks to a 93rdminute strike from Sean Gannon – his first ever league goal for the Hoops – against Longford Town that secured a 2-1 win.

It was their third late goal that has rescued points for Rovers already so far this season – with an Aaron Greene 87th goal and Rory Gaffney 88th minute goal helping to 1-1 draws against St. Pats and Sligo.

“I'm delighted that Sean Gannon put it in [for the win] because I thought his performance on the night was very good. You can see Sean is getting stronger and more used to the system with each game he plays.

“I think the players knew that the first half wasn't at our standards that we've set the last couple of years so I didn't have to say much [at half time] to correct it. The group as a whole knew it wasn't good enough. We were just below our levels and if you're below your levels against anybody in this league you're in for a tough night and the first half was.

“We started on the front foot [in the second half], were more aggressive in everything and played to our level. Then came a flurry of chances and openings so the second half was a lot better. We were really good and controlled the whole second half.

“You have to be patient, keep probing and moving because at times there's eight or nine in the box defensively. So you're waiting for that opening to open up and the players did that really well. They created really good chances."

Drogheda sit just three points behind the Hoops in the table and Bradley believes that United “have been good” in the campaign so far. "I've watched their games and they've played well. The pitch up there is always a bit of a leveller in terms of the size of it. It's going to be a difficult game but it's one that we're looking forward to."

While the teams haven’t met in league action since 2017, they have faced each other twice since then in the FAI Cup. The Drogs dumped the Hoops out of the competition in United Park in 2018 with Rovers extracting a modicum of revenge by beating United 4-0 in Tallaght Stadium in the FAI Cup second round the following season.

April 2017 was the last time Drogheda United beat Shamrock Rovers at home in the league. Sean Thornton scored a first half goal for United. It looked like Graham Burke had rescued a point with a last minute goal only for him to put the ball through his own net three minutes into injury time - handing United their first league win over Rovers for 12 years.

Mark Doyle is the top scorer for the Drogs so far this season with three goals. Graham Burke has two goals for Rovers – his half-way line strike against Derry City and a penalty in the Hoops 2-1 win over Longford Town on Saturday.

'It's something that he dreamed of since he was a boy' - Longford boss Daire Doyle praises stand-in captain Aodh Dervin https://t.co/rbgtBpz2wD pic.twitter.com/evbhC1FsVp