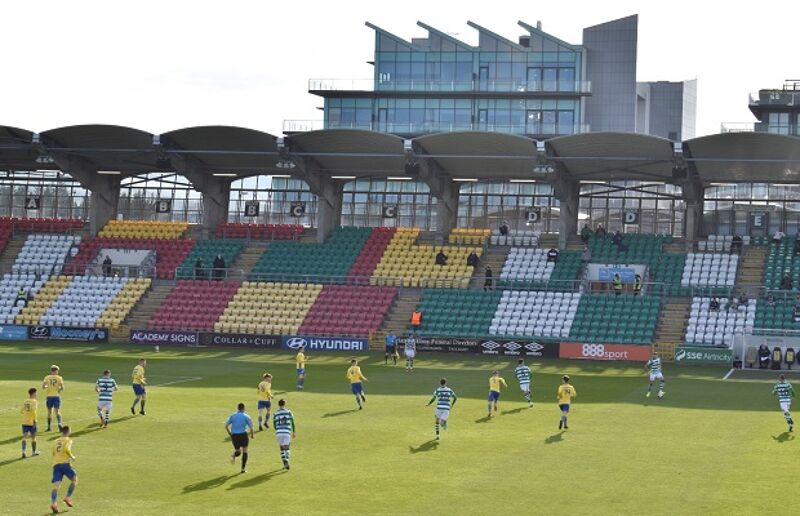 It was an unfortunate outcome for the visitors who can feel disappointed to leave without a point at the home of the reigning Premier Division champions.

Dylan Grimes’ spot-kick gave Longford an early first-half lead – and they kept that lead into the second-half until Graham Burke converted from the spot.

But Gannon was on hand to fire home an injury-time winner with the aid of a deflection in the 93rd minute.

Shamrock Rovers came into the game following a comprehensive 2-0 win away to Derry City at the Ryan McBride Brandywell Stadium mid-week.

Stephen Bradley’s Hoops made five changes from that win away to the Candystripes, with Aaron Greene replacing Rory Gaffney up front.

Daire Doyle’s Longford Town however entered proceedings after succumbing to a heavy 4-0 defeat at the hands of fellow newly-promoted side Drogheda United.

The Red and Black had to do without the services of the injured quartet of Dean Byrne, Dean Zambra, Aaron McNally and Callum Warfield for the game – and they made five changes from their defeat at Bishopsgate last weekend as Mick Kelly came in for his first start of the season.

And despite the odds being firmly stacked against Longford prior to the game they took an early lead.

Aaron Dobbs broke through after pouncing on a poor touch from Roberto Lopes – before he was then hauled down by the Cape Verde international.

Dylan Grimes made no mistake from the spot as he beat Alan Mannus with the spot-kick.

Rovers almost hit back quickly after – but Burke saw his shot blocked by the head of Joe Gorman.

The Ireland international found a pocket of space again after 15 minutes – but his low shot was saved well by Michael Kelly in the visitor’s goal.

While the Hoops were able to pierce through the Longford defence at will in spells – it was the high-pressing game from De Town that suitably impressed.

Doyle’s side were dogged whenever they were out of possession – with captain for the day Aodh Dervin typifying the press as Rovers struggled to get out of their first phase of play at times.

Just seconds before the half-time break Rovers ought to have levelled the game – but Aaron Greene’s header was saved by Kelly – either side of the ex-Cabinteely shot-stopper and it would have been in.

Despite struggling to create any clear cut chances during the first-half – Rovers went close twice in the space of the first minute of the second-half.

However, the Hoops leveled matters in the 53rd minute – as Burke slotted home his penalty under the body of Longford’s keeper.

Referee Rob Hennessy awarded the penalty after Dobbs felled Lopes off a Dylan Watts low corner just in front of the six-yard box in a role reversal of Longford’s earlier penalty.

Watts then went close for the Hoops but his shot on the stretch failed to trouble the Longford Town rear-guard.

Aaron Robinson had an opportunity for the visitors – but left-footed effort was comfortably tipped over the bar by the calming presence of Mannus in the host’s goal.

Karl Chambers then fashioned an opening of his own – but his stray shot just looped over the bar.

With just over 15 minutes to play – Rory Gaffney then went close, but he flashed his shot wide of Kelly’s goal.

Burke then skied his effort over the bar after some good play on the edge of the Longford Town penalty area.

As the clock neared the full-time whistle, Greene forced a great save from Kelly’s feet – but the winner was to come moments later through Sean Gannon.

Watts' free kick was blocked by the Longford wall and it came out to Gannon whose shot on the edge of the penalty area was deflected into the corner of the net off Aodh Dervin.

The result saw Rovers extend their unbeaten run to 27 games – equalling a modern-day League of Ireland record set by Bohemians most recently in 2008, and Athlone Town in 1981. They now chase the club record of 30 unbeaten which dates from 1927.

Marc Ludden: 'Bar tonight, I want Galway to win the league and want the lads to do well, I know them for so many years.' https://t.co/rIOaADmve6 pic.twitter.com/SvgyLIlDlX