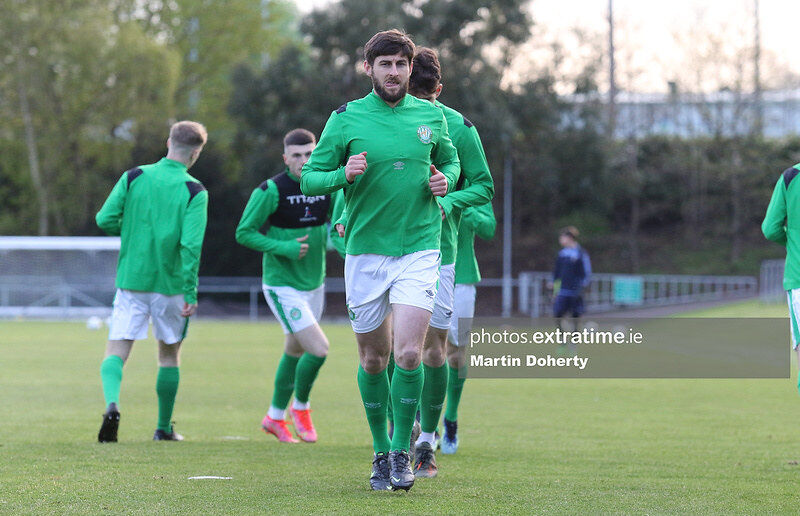 Aaron Barry of Bray Wanderers during the warm up in last week's game with UCD. Credit: Martin Doherty (ETPhotos)

Bray Wanderers host Athlone Town in the Carlisle Grounds on Friday evening in a game that in recent seasons would have been viewed as a ‘banker ‘for the home side such was the lowly status of Athlone Town. However, that is far from being the case this season as the Midlanders find themselves at the top of the First Division table with seven points after three games while the Seagulls are looking up at them in sixth place with only three points.

Bray are unbeaten in their first three games but they also have yet to win a game this season as they have been involved in three draws in their opening three fixtures.

They were held to a 0-0 draw by newcomers Treaty Utd in their opening match at the Carlisle Grounds, before putring three goals past Shelbourne in their next outing in a cracking game in Tolka Park but also conceded three goals and then picked up their third point in another 0-0 draw with UCD in Belfield last weekend.

They will count themselves unlucky not to have come away from the Tolka Park game with all three points, as they were in control at 3-2 with 15 mins left only for the home side to be awarded a highly dubious penalty which Georgie Poynton put away to level the tie at 3-3.

In the game in Belfield they were under severe pressure from UCD for most of the first half and were lucky to get to half time at 0-0.

UCD’s pace caused Bray lots of problems with the student’s Colm Whelan in particular troubling the visitors defence any time he ran at them, and it took all of Aaron Barry’s experience to prevent Whelan troubling Brian Maher in the Bray goal.

There was a much better display from the Seagulls in the second half however as they proceeded to dominate the game, on loan Brandon Kavanagh and winger Ryan Graydon in particular stretched the UCD defence on numerous occasions. Substitute Joe Doyle also added pace to their attack albeit that he appeared a bit rusty having been out injured in the early part of the season.

Athlone Town finished bottom of the table in the 2020 season and third from the bottom in 2019, but they are a transformed outfit this season as they proudly sit on top of the table with seven points, albeit that it still very early in the season.

The most significant aspect of their early season form however is that they have picked up six of their seven points against two teams who were among the favourites for promotion this year.

Having drawn 2-2 away to UCD in their opening fixture, they then hosted John Caulfield’s Galway Utd at Lissywollen and recorded a thoroughly deserved 3-1 victory. Aided by a Gary Boylan own goal in the 11th minute, Athlone went on to score another two goals courtesy of Stephen Meaney and were 3-0 ahead as early as the 26th minute of the first half.

They held on to this three-goal advantage until the 76th minute when Wilson Wameru pulled one back for Galway but although Caulfield’s side did create more chances late on it was Athlone’s night as they held on to claim all three points.

Manager Adrian Carberry not surprisingly named an unchanged side when they travelled to Turners Cross to face Cork City last weekend. The home side did assert themselves for most of the first half and Athlone had to soak up a lot of pressure and were grateful that keeper Michael Schlingermann was in such good form, making good saves from Bargery and McGlade to leave the game scoreless at half time.

Athlone did not create too many chances themselves but when they got an opportunity they took it. Adam Wixted took advantage of hesitancy on the part of City debutant Jonas Hakkinen in the 79th minute to create a chance for James Doona who beat McNulty in the City goal.

Athlone held that 1-0 lead to the end and it certainly marked a different outcome to a game between these two sides, as the last contest, an FAI Cup match in 2017, resulted in a 7-0 win for the Leesiders – changed times indeed!!

In general Bray have had the upper hand on the Midlanders having won four of the last five matches between the pair, Athlone’s only success was in round four of the 2019 league when they recorded a slender 1-0 away at the Carlisle Grounds