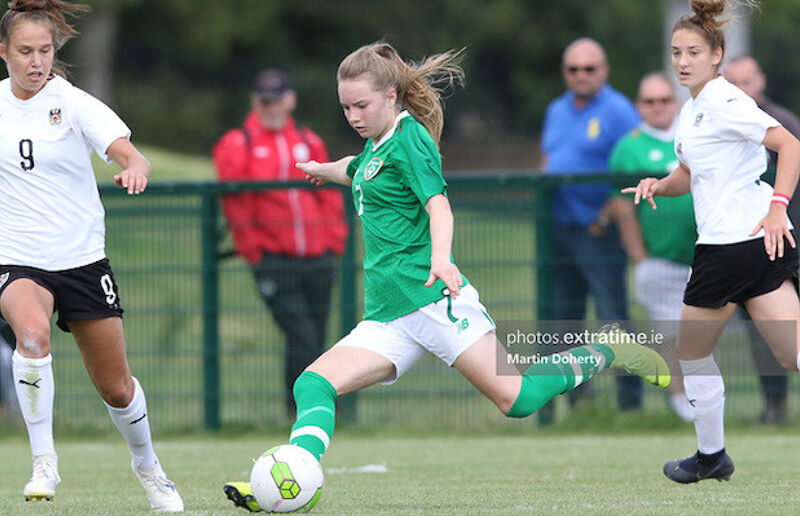 Izzy Atkinson in action for Republic of Ireland u19 v Austria u19 Credit: Martin Doherty (ETPhotos)

Celtic have announced the signing of Irish international Izzy Atkinson from Shelbourne.

The wing-back is one of four deadline day signings by Head Coach Fran Alonso, alongside Jacynta Galabadaarchi from Napoli, Mariah Lee from American side OL Reign and Anna Filbey who joins on loan from Tottenham.

Reacting on Twitter, Atkinson commented “My childhood dream I can’t believe it.. Over the moon to have signed my first professional contract! Makes it even more special to be at this club.”

Speaking to the Celtic website, Alonso said “With these four signings, in my eyes it makes the team much stronger than what it was before lockdown and gives us more experience, because they all either bring international or top league experience.”

#CelticFC Women are pleased to announce the signing of @FAIreland internationalist @izzyatkinson_ from @shelsfc! Welcome to Celtic, Izzy! pic.twitter.com/gKIB4MOLDO

Atkinson signs having impressed with Shelbourne in the Women’s National League over the past four seasons, earning her several call ups to Vera Pauw’s Irish team. The 19-year-old has three senior caps to her name so far as well as several underage caps.

She joins fellow Irish international Keeva Keenan at the Scottish club who currently sit third in the Scottish Women’s Premier League 1, behind city rivals Rangers and Glasgow City. The league is currently suspended until 14 February due to Covid-19 restrictions.

Celtic made the switch to professional football in 2019 following the announcement of Alonso as head coach. Alonso has previously worked with Ronald Koeman and Mauricio Pochettino at Everton and Southampton.