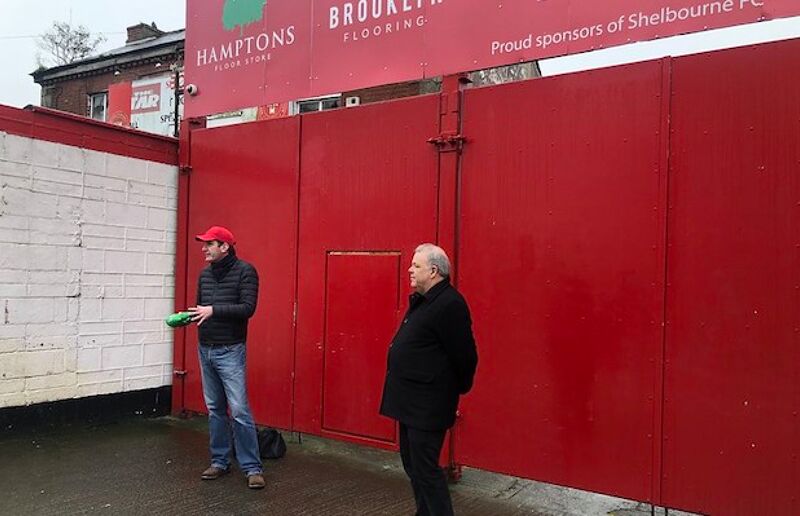 The tour outside of Tolka Park Credit: Macdara Ferris (ETPhotos)

It seems an unlikely combination having a comedian and a TD lead a football walking tour around north inner city Dublin but it works and the group who were on the tour in the run-up to Christmas certainly enjoyed their ‘90 minutes plus extra-time’ journey from Croke Park to Tolka Park and up to Dalymount Park.

Gary Cooke (Apres Match) and Aodhán Ó Riordáin (The Labour Party) have been ‘running’ these walking tours during 2020 when coronavirus restrictions allow. The duo share the football stories, with Cooke dropping in plenty of impressions and Ó Riordáin pulling out match programmes and match worn jerseys along the way.

The tour begins in the shadow of Croke Park at the junction of Clonliffe Road and Ballybough Road but it is also clear that there is also a shadow cast in this location by the sheer number of Irish international footballers who grew up so close to Croker.

Cooke reals off a long list of footballers from the area from the more recent ones like Jack Byrne and Troy Parrott, through Wes Houlihan, Stephen Elliot, Olivia O'Toole and Curtis Fleming all the way back to Paddy Moore – who in 1934 against Belgium became the first player in history to score four goals in a World Cup qualifier.

We get our first John Giles impression from Cooke outside Giles’ old schoolboy club of Stella Maris’ and passers-by look up on a couple of occasions during the tour when they spot Cooke or rather when they hear an Eamon Dunphy impression drifting into the Drumcondra air.

The stories told are around the mixture of football, history and politics as we make our way to Tolka Park. En-route we detour off Richmond Road where Ó Riordáin points out the house of Tom Clarke – executed for his part in the 1916 rising.

Later outside the Archbishop’s Palace on Drumcondra Road we hear about the controversy around the Ireland v Yugoslavia match in 1955. Archbishop McQuaid had called for the postponement of the game due to what the influential Archbishop called Catholic persecution in Yugoslavia.

As we make our way back across to Croke Park, along Fitzroy Avenue we stop outside the former home of Patrick O’Connell – the Irishman who captained Manchester United and managed Barcelona in the 1930s, and we learn about the man from Blackrock in South County Dublin who managed the other Spanish football powerhouse.

Arthur Johnson was born in Dublin in August 1879 and played both in goal and outfield for Real Madrid – he scored the club’s first ever goal and he later became the coach winning the club’s first trophy – the 1905 Copa del Rey.

We’re selecting an Ireland Soccer XI from Croke Park area for your #Level5 pleasure! Tell us your views!

Next defender is Patrick O’Connell from Drumcondra.

We end the tour in Dalymount Park and talk about the many famous games played at the home of Irish football. With a ‘Refugees Welcome’ mural on the wall behind where we stand, we discuss the Nazi salute given by the German team when they played Ireland in 1936.

During the months when supporters have not been allowed to attend games, the tour has proved particularly popular. Although the tours are not able to be run when the country is in Level 5 COVID-19 restrictions.

Highlight of 2020 for us was starting our Football History Walking Tour from Croker to Dalymount.
Plan was to do ONE & we ended up doing over 20!
Delighted to attract sporting greats like Mickey Whelan & Turlough O’Connor to the tour.
We’ll get going again after restrictions end. pic.twitter.com/xO4Z3DMoJM