Postcard from the pandemic pressbox - a year in review 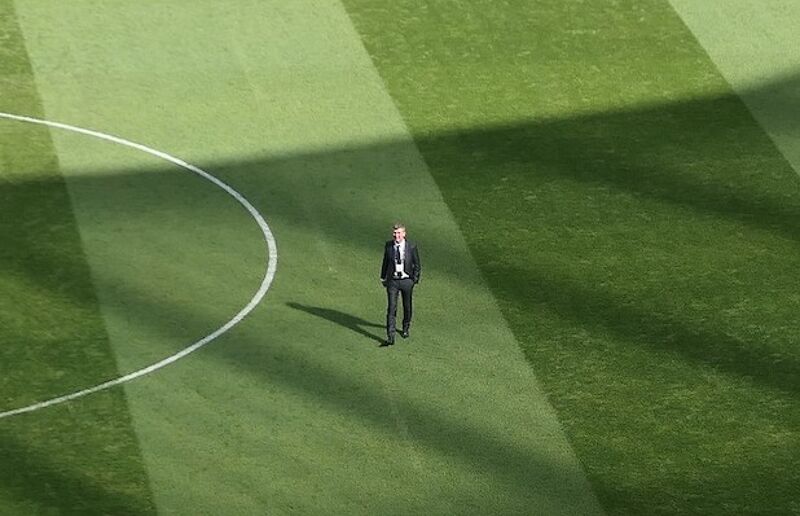 Stephen Kenny in the Aviva Stadium ahead of his first home game in charge of the Republic of Ireland Credit: Macdara Ferris (ETPhotos)

At this time of year, I usually pen an article selecting some highlights from the year covering Irish football as way of encouraging people to get in touch with us if they want to join our volunteer team here at extratime.com.

This season wasn’t quite what we thought we would be covering. With my press pass – a golden ticket for behind-closed-doors games since August – I know I have been very lucky to be able to report on games from inside various grounds.

And so here are a few memorable moments from the most remarkable of seasons.

Bookends to the pandemic season

There are two press areas in Richmond Park and to enter either one to get to a spare seat you have to ask those already in there to stand up to let you by. So there was no such thing as physical distancing when on St. Valentine’s night I spent the first night of the 2020 season covering St. Patrick’s Athletic against Waterford.

My face was well covered on a cold night with a scarf and as a smoke from some flares drifted out across the Inchicore night sky, a crowd of 2,807 lent itself to an atmospheric start to the new season.

Ten months later and the season was bookended by my final game of 2020 and it was all a bit different in the Aviva Stadium. I had 2m clear distance and more all around me in the press box, my face was covered but with a mask and with fog drifting across from Havelock Square there was no atmosphere in the Aviva for the behind-closed-doors FAI Cup Final between Shamrock Rovers and Dundalk.

A lowlight of the year was back to Thursday 12 March. At 7am in the morning in Washington DC (11am in Dublin) then Taoiseach Leo Varadkar started his speech to the Irish public starting with “I need to speak to you about the Coronavirus” and with all that followed, the upcoming weekend’s League of Ireland fixtures were postponed and football wouldn’t return till the last day of July.

The UEFA 2020 playoffs set for the end of March were an early casualty of the COVID-19 crisis and their postponement ultimately meant Stephen Kenny would come in as manager of the Republic of Ireland team for the re-arranged playoff against Slovakia in October in place of Mick McCarthy.

So one of the more bizarre events I got to go to during the year was the unveiling of the new Ireland manager in April - usually something that is quite a big occasion. Previous venues have been the Shelbourne Hotel, the Concert Hall in the RDS, the Gibson Hotel and the Aviva Stadium.

Sadly Stephen Kenny got a Microsoft Teams online meeting from his home where he had to deal with questions from the press in the various home offices, bedrooms or kitchens (as was the case for me)!

I was on a few Microsoft Team meetings this week but only one with new Republic of Ireland manager. Here is my postcard from my kitchen table on today's event with Stephen Kenny https://t.co/aRgNiYRsoJ

Football returns via a stream

It was a highlight for football just to return as it did at the end of July and it was a real privilege for us in extratime.com to be able to cover games from the stadium. With a normal temperature, completed COVID-19 health check form and a mask, I was able to attend behind-closed-doors games in all the grounds in Dublin.

It was clear what a good job each club did to make sure the games could go ahead – even if fans weren’t able to attend.

The European campaigns for League of Ireland clubs were affected by coronavirus. As well as matches pushed out to August and being played behind closed doors, the qualifiers were all moved to one-legged games.

Shamrock Rovers ended up playing Italian giants AC Milan with Zlatan Ibrahimovic strutting his stuff in Tallaght. The Hoops made the current Serie A leaders work hard for their 2-0 victory but with the game played with no fans, my most memorable moment from Europe and indeed the season was the seemingly endless penalty shootout in the previous round against Finnish side Ilves Tampere.

2-2 after 90 minutes the game went to extra-time and as it did from the pressbox we could begin to hear the odd shout from behind the goal at The Square end of the ground. Some Rovers supporters had clambered up and were perched on the perimeter wall where they watched the game to go to a shootout.

Ilves went first and scored before Jack Byrne’s penalty was pushed onto the post. The visitors missed their second kickbut kept scoring. Remarkably the home team matched them kick for kick - scoring a dozen in a row with eight Rovers penalties converted despite the player having the pressure of knowing that a miss would send them out of Europe.

Now I know reporting on a shoot-out isn’t as stressful as taking a penalty but there is a lot to take in – the penalty taker, direction of kick, direction of goalkeeper’s dive and no benefit of replays in Tallaght that night. The players kept taking them, kept scoring them and I kept going with my notetaking.

Here is what a 12-11 penalty shootout looks in written form pic.twitter.com/sBdKL24Qlz

When Ilves took the 25th kick, Alan Mannus pushed the ball away to set up Joey O’Brien to step forward. At 10.46pm he slotted home his second spot kick to win the tie. Mannus’ reaction was to put his hands to his head in disbelief of being involved in such an incredible shootout, something I mirrored in the press box not quite believing what I’d witnessed.

No goals and a title won without kicking a ball

Stephen Kenny’s side has struggled in front of goal so I can’t claim being in the empty Aviva Stadium to see Ireland go scoreless in September’s 1-0 defeat to Finland was much of a highlight but attending Kenny’s first home game in charge in an empty Aviva Stadium was certainly memorable.

FAI saluting frontline workers on the cover of the #IRLFIN match programme pic.twitter.com/aPETOovKbn

The following month I was in Dalymount for a bizarre night that saw Finn Harps win there for the first time this century – a huge step for Harps in what proved to be a successful battle against relegation.

Their 2-0 win over Bohs that night saw Cork City sent down and Shamrock Rovers being crowned champions without having to kick a ball. The Hoops had won their 18th title with 22% of the shortened season still to be played.

No Rovers double but Dundalk redemption

However, there would be no double for the Hoops as Filippo Giovagnoli won his first bit of silverware as Dundalk boss. David McMillan became just the third player to score a hat-trick in the FAI Cup Final as the Lilywhites won 4-2 after extra-time.

Fans would have nearly given their right arm to be in the Aviva Stadium for the cup final and so I resolved on the day not to complain about the cold despite nearly losing some digits due to frostbite.

A few weeks on, I feel I can make note of it now that feelings have returned to my toes. I did come prepared, six layers and very thankful of my flask of tea when the game headed to extra-time and the temperature dipped to two degrees.

In the toilets everyone was washing their hands for health reasons but also the hot water helped thawed out frozen digits. Also frozen in time were the advertisements in the toilets with posters for a Leinster v Munster game in April that was never played in front of fans.

After 120 minutes the Lilywhite players celebrations echoed around the empty stadium as Chris Shields lifted the FAI Cup trophy with the Dundalk squad wearing T-shirts in tribute to the Oriel Park groundsman Harry Taafe who tragically died earlier in the year.

Dundalk’s win brought the curtain down on the domestic season and while it wasn’t the type of season anyone expected, the Lilywhites had a major trophy to go with their Europa League group stage qualification and it made for a memorable end to my season in the pressbox.

We are always on the look out for new talent, people who are interested in writing or taking photographs about all aspects of Irish football.

If this sounds like something that might interest you, now is the time to get in touch with us by emailing [email protected] explaining why you want to be part of our volunteer team, details of any journalism experience to date and, where possible, a one page CV .